The Bacuit archipelago, with 45 islands and islets that contain steep and massive karst cliffs, white sand beaches, hidden lagoons and coral reefs, is easily the most toured part of El Nido in northern Palawan. Tour operators in El Nido Town offer four different whole-day packages for touring these islands, namely Tours A, B, C and D. The most popular are Tours A and C. We chose to start off our second day on El Nido with Tour C, promptly leaving the town at 9AM in the morning along with 17 other people aboard our motorized outrigger. 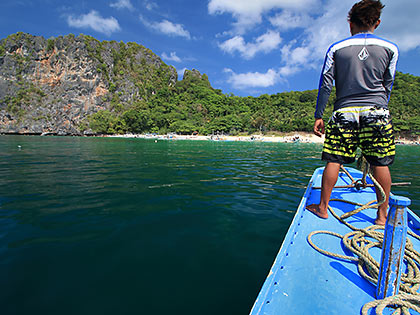 First stop for the day was Dilumacad or Helicopter Island, so named because it is said to resemble the shape of a helicopter. (Some people had a hard time associating its shape with the rotary aircraft but it really does resemble the CH-47 Chinook twin-engine heavy-lift helicopter). Just 20 minutes away from El Nido town by boat, Helicopter Island features a nice, long white-sand beach, crystal-clear waters and towering karst formations projecting from a dense tropical forest on both ends of the island. 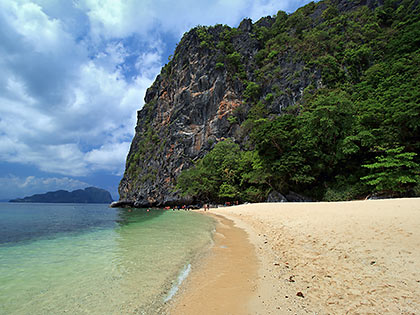 There are good snorkeling spots around the island, particularly in front of the tall karst cliff on the southern end. One has to swim several meters from the beach, however, since the coral reef is a bit farther out from shore. There are several fishes at the spot where the sea floor drops down abruptly. We later learned that Helicopter Island is a great place for beginner divers with its shallow reefs that contain a huge variety of corals, schools of fusiliers and all 7 species of anemone or clownfish in El Nido. There are underwater tunnels for advanced divers. It is also possible to spot sea turtles feeding on sea grass at the sea bottom during summer. 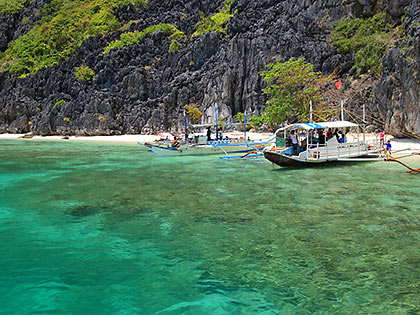 With 5 destinations in most tour packages tourists can only spend so much time on a particular destination before moving on. After a brief time of snorkeling and taking photos we were soon embarking on our boat and heading out for Tapiutan Island, the farthest of all islands included in the tour packages, from El Nido town.

Majority of Tour C boats head out for Star Beach on Tapiutan Island for the day's lunch stopover but each boat operator or crew have their own favorite spot and we ended up on Talisay Beach, also on Tapiutan Island. While they prepared lunch onboard, our boat crew informed us that we can swim and snorkel on the beach. 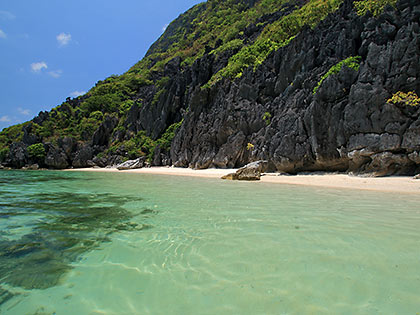 The beach has a relatively short stretch of white sand compared to Helicopter Island but its underwater riches are no less enthralling. We had more time to snorkel around the waters at Talisay Beach and soon realized that Tapiutan Island harbors a rich diversity of marine life. We encountered butterfly fish, parrot fish, clownfish or anemone fish, triggerfish and many more – just a short distance from shore. Our boat mates got so engrossed with the colorful marine life display that we forgot about lunch until our boat crew started to bring our prepared lunch buffet from the boat.

Initially almost empty, Talisay Beach had filled up with boats by the time we started to have lunch. After some more snorkeling, a survey of the place inland and some rest, we were soon embarking on our outrigger and heading towards our next destination. 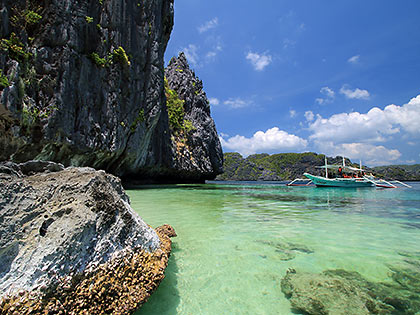 On to the next island: a tour boat leaves Talisay Beach 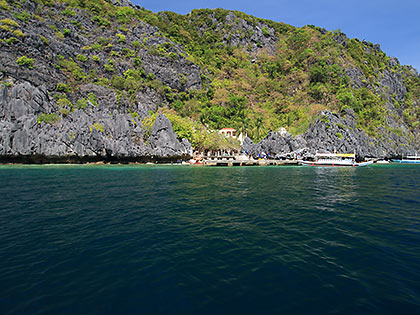 For many in our boat, Matinloc Island was the highlight of Tour C. Located just across Tapiutan Strait from Tapiutan Island, Matinloc houses a Catholic shrine that was built in the 1980s along with an adjacent mansion. The shrine and mansion has since been neglected and had run down but visitors still drop by and locals go on a pilgrimage here every year. 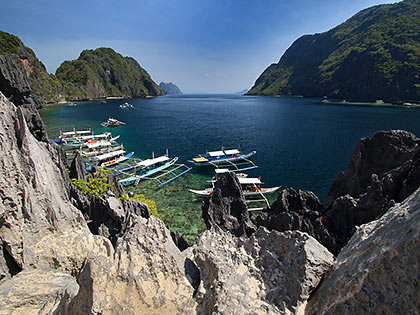 What we were really looking forward to at Matinloc was the famous view of Matinloc Island, the Tapiutan Strait and Tapiutan Island. We only had to climb a short limestone hill located close to the shrine to get a remarkable view of this part of the Bacuit archipelago. The natural view deck is a bit small and we had to stand in line and jostle for space with other spectators but the stunning views were well worth the hassle.

One last look at the picturesque view of Tapiutan Strait

Our next destination was Secret Beach, located at another area in Matinloc Island. It's almost like a lagoon completely enclosed by imposing limestone or karst cliffs. There is a short stretch of white sand beach inside. Boats cannot enter Secret Beach. We had to swim from our boat and through a narrow opening in the karst formations to get to the beach. Here we had to be a little careful since the waves were moderately strong and could scrape us against the rocky opening.

Once inside though, the water immediately became shallow. Coral rock dominates the sea bottom here and we could easily see colorful fishes that were partially trapped in crystal-clear shallow pools created by the uneven and often slippery rock bottom of Secret Beach. The white sand beach is on the opposite end of the narrow entrance. It was this beach that reportedly inspired Alex Garland to write the book "The Beach." 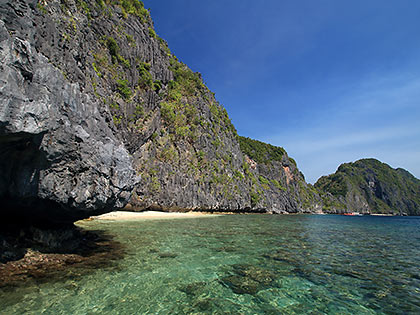 With a movie shooting going on at Matinloc's small pier our boat had to anchor at this stretch of Matinloc; it was a short but rocky trek to the Matinloc shrine from this point.

Unfortunately, without any dry bag, we could not bring a DSLR camera inside Secret Beach and had to look with envy at visitors shooting around with their GoPros (several of which are for rent in town). It was the same story for Hidden Beach, also in Matinloc Island.

Hidden Beach is another beautiful white sand beach dominated by limestone formations. During low tide, boats cannot dock on the beach so we had to leave our boat at a considerable distance and walk to get there. The water is shallow for the most part so there was no need to swim for much of the trek. The beach itself is blocked from view by an imposing karst cliff but once you're pass that the views of Hidden Beach are magnificent. The waters are very clear and we could easily see various species of corals underneath.

On the way to Hidden Beach, however, we spotted a large number of jellyfish floating in shallow water. Most are reddish in color but there were also some of the more usual, almost transparent variety. While not as dangerous as the box jellyfish, these creatures can still sting you good if you get too close to them. Fortunately it was easy to spot and avoid them because of their color. The only setback for us was not being able to snorkel much out of fear of encountering these creatures face-to-face in the water. 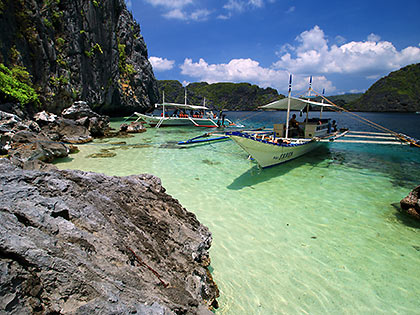 Tour C is one of 4 tour packages being offered by tour operators in El Nido proper. Tour operators will combine you with other guests to fill up a boat; this is a money-saving measure that supposedly started here at El Nido before being adapted elsewhere. The tour normally leaves town at 9AM and finishes anytime from 4 to 5PM. Tour C costs P1200 to 1400 per person and includes lunch buffet, snorkels and masks and life vests. The boat crew usually assists people, especially those with no or limited swimming skills. Note that you also need to shell out P200 per person for the eco-tourism development fee. This fee is good for 10 days.

Our resort at Corong Corong – Desert Rose Hotel – offered to include the boat tours in their package. Noting that their rates are even cheaper than some of the rates being advertised (Tour C was offered for P1,200), we immediately accepted. This is probably normal now for El Nido with resort owners and tour operators collaborating; it makes arranging these tours much more convenient for visitors.