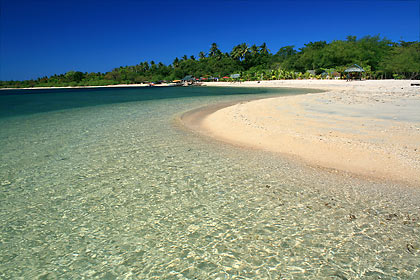 Long stretches of almost white volcanic sand, turquoise waters, serene lagoons lined by pine trees and pristine islets set against white sand beaches and rugged mountains dot the western seaboard of Luzon in the province of Zambales. Its proximity to the nation's capital region makes Zambales a popular destination. Several destinations in the province are ideal for day trips and on several occasions we were able to leave Metro Manila early in the morning and be back by nightfall when pressed for time. At other times we merely had to stay overnight.

The Coves and Islands of Pundaquit, San Antonio

A barangay in San Antonio town in the province of Zambales, Pundaquit is no longer the quaint, laid-back village it once was when we went there for the first time in 2005. It has become the jump-off point for the now popular destinations of Capones and Camara Islands and the coves of Anawangin, Talisayin, Nagsasa and Silanguin. Although attracting more and more visitors every year (most probably perpetrated by blogs and websites like this), these locations are still relatively pristine and have retained their charm and appeal for the shoestring traveler. 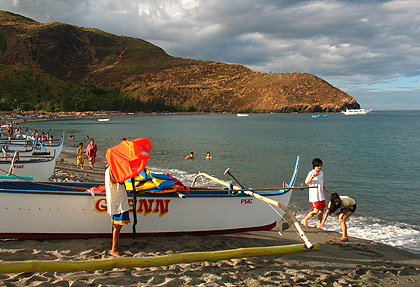 Boats on the beach at Pundaquit, San Antonio, Zambales,

Pundaquit is in itself already a worthwhile destination. Surfing during the monsoon season is becoming popular along its beachfront. One can even observe sea turtles arriving to lay eggs during the months of December to February. Because of the influx of tourists to the coves and islands in the area numerous resorts have sprung up in Pundaquit in the past five years. 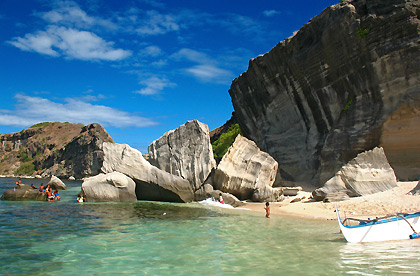 Huge rocks on the beach at Capones Island.

Capones and Camara Islands. These two rocky islets are easily visible from the beachfront of Pundaquit and can be reached by boat in 15 to 20 minutes. During the two occasions we visited Capones and Camara, the boat rides were a little rough (the two islands lie in the open part of the South China Sea) but the sights that greeted us upon landing made the trip worthwhile. Both islets are characterized by huge rocks, white sand beaches and clear, emerald waters. We even spotted small fish swimming just off the rocks on the beach in both islands. Regrettably we did not bring snorkels on both visits. Read more.. 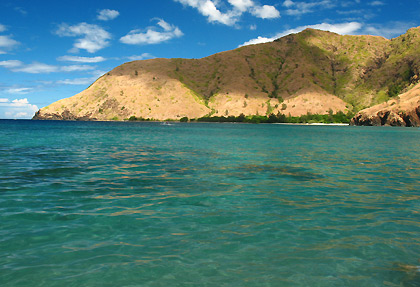 Anawangin Cove. The first things we noticed about this place were the neat rows of evergreen trees at the back of the beach and the white sand beach. On closer inspection the sandy material turned out to be whitish-grey volcanic ash deposited in huge quantities during the eruption of nearby Mt. Pinatubo in 1991. Behind the beach is a small evergreen forest and a creek. Normally accessible by a 30 minute boat ride from Pundaquit, Anawangin Cove can also be trekked by land through the hills beyond the fishing village of Pundaquit. Anawangin was once totally isolated but now small stores, huts, shower rooms and other basic amenities have sprouted up in the past few years to cater to the growing crowds. Read more. 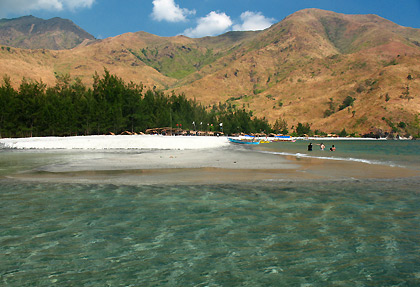 A sandbar at Nagsasa Cove with evergreen trees in the background, San Antonio, Zambales.

Nagsasa Cove. Almost a mirror image of Anawangin, Nagsasa Cove is much larger, more pristine and – since it is located a bit further down the coast – less crowded. Leo got to visit the place this year and was just ecstatic about it. The emerald green waters, the long stretch of grayish white sand, the evergreen trees, a shallow lagoon just at the back of the beach and a green, rolling valley beyond give a sense of tranquility. Nagsasa is another 20-30 minutes of boat ride from Anawangin Cove – or about a one hour's ride from Pundaquit. Definitely to be recommended to any shoestring traveler. Read more.

Talisayin and Silanguin Coves. On the way to Nagsasa from Anawangin lies another beautiful cove called Talisayin. It is again similar to the two other coves – grayish white sandy beach, evergreen trees and a creek or lagoon just behind the beach. There are also no resorts here although there are some beach huts and a big beach house that is used as a vacation place. It seems that this area is privately owned. Silanguin Cove is the most remote of the four coves from Pundaquit proper and is in fact closer to Subic Bay. It is the largest of all the four coves. Some parts of the cove are reportedly being developed into resorts by foreigners although the place is still pretty rustic.

How to Get There/Shoestring Travelers Tips

The Capones and Camara Islands, Anawangin and Nagsasa Coves (as well as Talisayin and Silanguin Coves) are all accessible by boat from Pundaquit. Trekkers have also used Pundaquit as a base for exploring these coves. 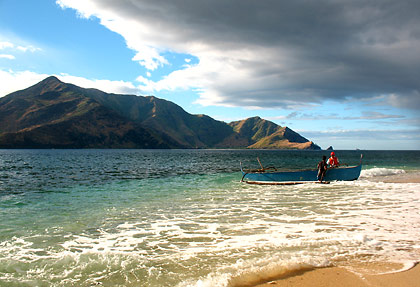 To get to Pundaquit by car or private vehicle from Manila, drive to the town of San Antonio, Zambales. San Antonio is just north of Olongapo City. The fastest way to get there is by taking the North Luzon Expressway (NLEX), then continuing on via the Subic-Clark-Tarlac Expressway (SCTEX) all the way to the Subic Base Metropolitan Authority (SBMA). At SBMA take the exit going back to the national highway and drive past the towns of Subic, Castillejos and San Marcelino. Enter San Antonio by turning left from the national highway at an intersection in San Marceliino. You will need to ask for directions to Pundaquit from locals at this point as it is too complicated to describe here. There are pay parking lots in Pundaquit if you are not staying overnight at the resorts there. Total travel time from Manila is about 3.5 to 4 hours.

Travelers planning to get there via a public ride should first take a bus going to Iba or Sta, Cruz, Zambales. Victory Liner buses ply this route and both trips will pass by San Antonio. Ask the bus conductor to drop you off at the municipal hall of San Antonio. From there you can take a tricycle to Pundaquit. 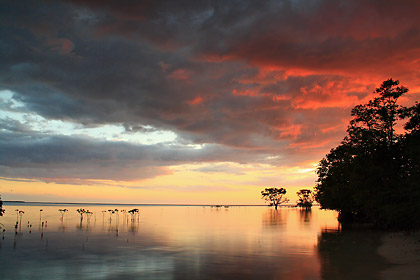 Sunset colors on display at the mangrove area on Magalawa's western shores.

Much further up north along the Zambales coast and just past the provincial capital of Iba is the town of Palauig. An otherwise ordinary coastal town, Palauig did not attract a lot of attention whenever we would drive along Zambales' long coastline. That was until 2012 when we discovered an obscure island just off that town's coast that goes by the name of Magalawa. It would take another year before we got to visit the place ourselves and realized just what we had been missing during our previous road trips through the province. Getting to Magalawa requires a rough 15-20 minute ride through an unpaved road from the national highway but after that mini-adventure, the island is just 5 to 15 minutes away from two jump-off points on the mainland. 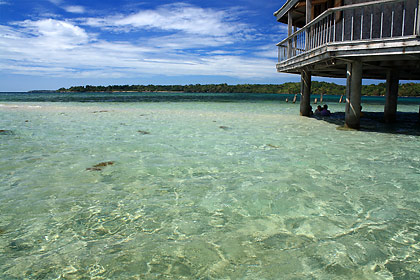 The sandbar and resthouse just off San Salvador Island.

Creamy white sand and clear emerald green waters characterize the beachfront where the two resorts are located. The island's laid-back atmosphere provides a perfect environment for rest and relaxation. A mangrove area on the western side of the island makes for a beautiful backdrop at sunset. And to our delight we discovered a bonus destination in the form of a giant clam sanctuary and a white sand bar off nearby San Salvador Island. Read more.

This is another island that had been on our travel radar for some time until we finally made the trip in 2012. Potipot Island lies off Uacon in Candelaria town. The latter is about halfway between the towns of Masinloc and Santa Cruz, the last municipality of Zambales before Pangasinan. It is the northernmost of all the destinations mentioned here but is also one of the most accessible islands we've visited. The jump-off points are relatively close to the national highway (the roads are also paved – no traveling through rough roads to get there) and the island is just ten minutes by boat from the mainland. 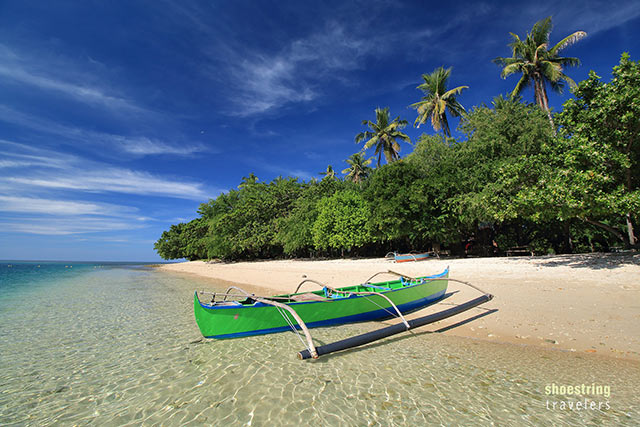 There are no resorts on the island although there are several huts and picnic tables. Potipot is even smaller than Magalawa Island and it is possible to walk around the island in 30 minutes. Its creamy white sand and clear waters make it ideal for swimming. The place can get packed on weekends – that's how popular Potipot Island is by now – but we went on a weekday and managed to avoid the crowds. Read more.

On the way back to Metro Manila from either Palauig or Candelaria, one can choose to stop at the roadside of the "Mango Highway," a stretch of road in San Narciso (the town just before San Antonio) where vendors offer mangos and other homegrown fruits. The mangos are of the sweet Santa Elena variety of carabao mangos that are found in Santa Cruz town. We never fail to stop here for pasalubongs and sometimes our travel friends return home with not a few baskets of the sweet fruit.