Baler: It's More than Surfing, Part 1 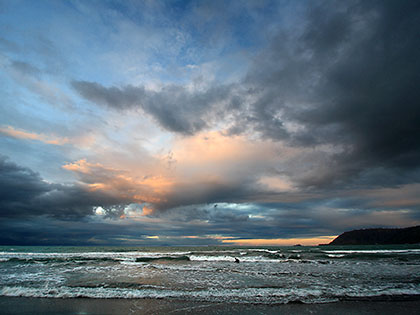 We've always made it a point to go on a vacation trip in December. However, the weather has grown so unpredictable lately that booking flights to distant destinations at this time of the year is a risky proposition. And typhoons that come during the month of December are among the strongest on record. That's what attracted us to Baler – a quaint, remote town in the province of Aurora. Accessible by land from Metro Manila, we do not have to go through the risk of getting a flight cancelled. Baler has always been known as a surfing destination and we're not really into surfing. However, this town and its surrounding municipalities have so much more to offer besides riding the waves of the wild Pacific blue. 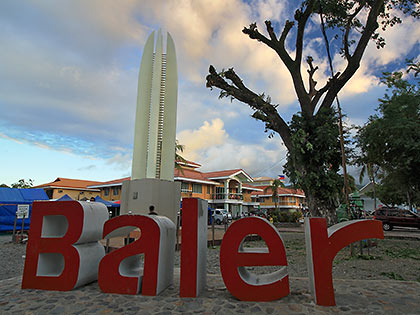 The Baler 400 Years monument (behind the large signage) has four pillars representing the 400-year history of the town.

(For more pictures of Baler visit our Flickr album)

This town is more than 400 years old. The Baler 400 Years monument at the side of the municipal plaza along Quezon St. and just behind the large, red-letter Baler signage is a tribute to that fact. This center of Baler is also home to the various historical landmarks of the city. 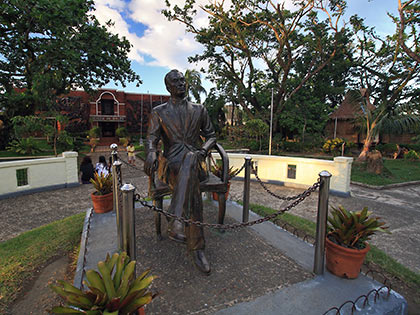 The Quezon Memorial Park with the Museo de Baler in the left background and a replica of Quezon's house on the right.

The Quezon Memorial Park along Quezon St. and almost adjacent to the town plaza was laid down in memory of President Manuel Quezon, Baler's most famous son. The park contains a 1937 Cadillac Cabriolet once used by Quezon as well as a replica of his ancestral house. The Museo de Baler or Baler Museum is also located right inside the park grounds. 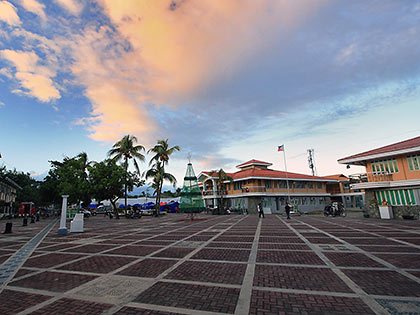 Museo de Baler has two floors that houses several artifacts showcasing the history of the town and Aurora province (the province used to be part of Quezon – formerly Tayabas – province until its separation in 1979). Particularly interesting are several photos from the Spanish colonial, American colonial and Japanese occupation periods. The museum also houses several paintings, sculptures and other works of art. There is a P35 entrance fee for the museum. 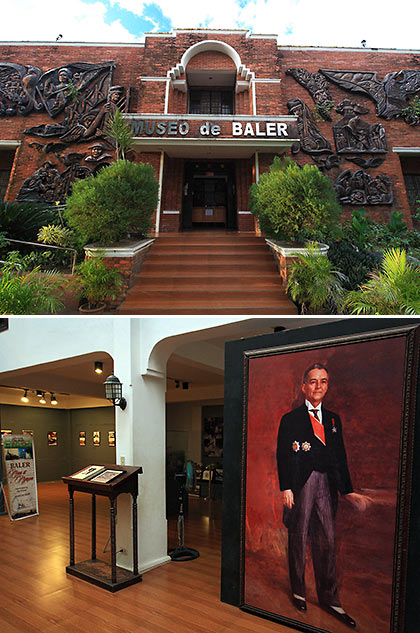 A short walk from the Baler museum into the municipal plaza brought us to the Baler Church, more officially known as the San Luis Obispo de Tolosa Church. This church housed the last holdouts of the Spanish regime in the country when a small Spanish garrison here was besieged but held out against Filipino revolutionaries for more than a year. Hostilities between the Spanish colonizers and the revolutionaries have been over for several months but the garrison did not believe the news until June 1899 when they were finally convinced and marched out to surrender. 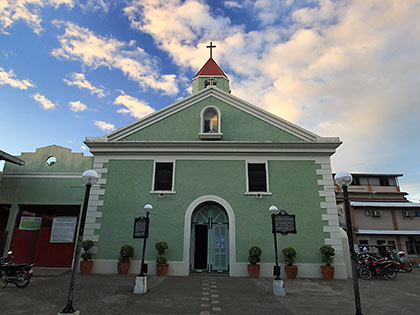 Just across Rizal Street from Baler Church, we headed for the Doña Aurora Quezon house, the birthplace of Aurora Aragon-Quezon, the wife of Pres. Manuel Quezon. We were informed by the staff at Museo de Baler that our P35 entrance fee covers a visit to the Doña Aurora Quezon house. By the time we got there, however, it was past 5PM and the house had closed its doors. We had to content ourselves with viewing the house from outside. The structure is actually a replica of the house of Doña Aurora's father, Pedro Aragon. We could also see another presidential car of Pres. Quezon inside the compound. 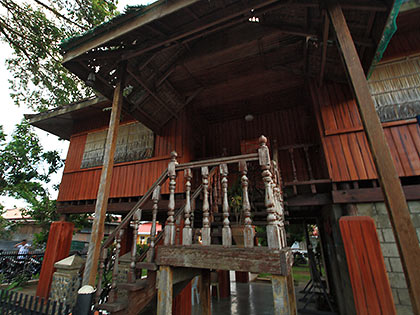 After a bit of history it was time to indulge in something more adventurous. Not too far from the town center and along Zabali Road, is the Baler Hanging Bridge. The hanging bridge is a steel-cable foot bridge over the moss-green waters of the Tibag-Sabang River. This river empties into Baler Bay at a point just to the south of Sabang Beach. We had a grand view of the river mouth while crossing the bridge. 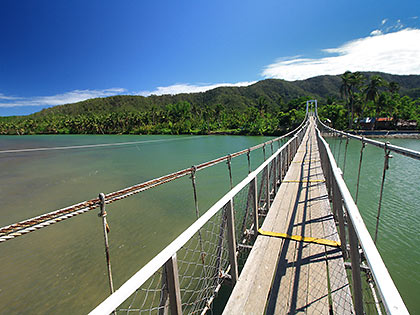 The Baler Hanging Bridge over the Tibag-Sabang River

The bridge itself was tilting alarmingly to one side, the result – our trike driver and tour guide said – of Typhoon Lando's strong winds which struck this region just a few weeks before. It did not prevent us from crossing the bridge at least up to the center of the span. However crossing this bridge back in 2011 was even more hair-raising. Just see for yourself here. 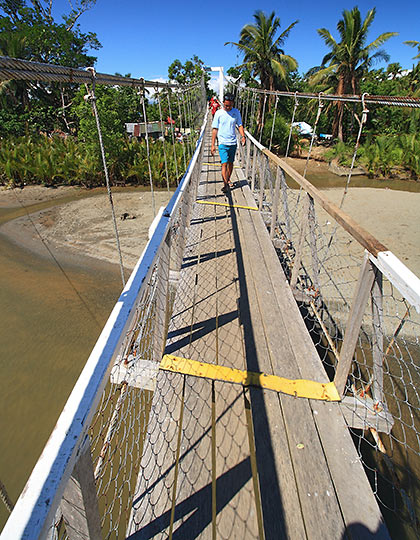 More adventures awaited us in our trek to Ditumabo Falls. The latter is actually within the boundaries of San Luis, a town adjacent to Baler. We hired trikes to take us on a half-day tour that also included the Baler Hanging Bridge. The trikes took the Nueva Ecija-Aurora Road out of town (the road that eventually leads to Bongabon, Nueva Ecija), then detoured into a paved road headed directly for the falls. This road is presently impassable to cars and is still undergoing construction but the trikes could use it. We were driven to a point from where the road ends and from where our trike drivers/tour guides accompanied us on a 30-minute trek to Ditumabo Falls. 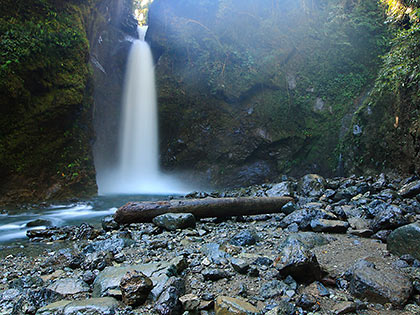 Located in similarly named Barangay Ditumabo, the Ditumabo Falls are often called by locals the Mother Falls because it is believed to be the biggest in the province. The hike to the falls carried us over rocky ground, rickety bamboo bridges over streams and at least two stream crossings.

Scenic stream leading to the falls

The stream leading to the falls are quite scenic. However, our trike driver had previously warned us not to expect the same scenery at the falls as advertised in the various tourism posters in Baler. And sure enough, the formerly deep and emerald-colored catch basin of Ditumabo Falls was gone and in its place was a small pool and a collection of rocks and debris – again another result of Typhoon Lando which dumped the material into the catch basin. The waterfall in itself however was still quite impressive, falling from a height of 140 feet and crashing down into the downsized pool below as it sprayed mists of cold spring water all around. 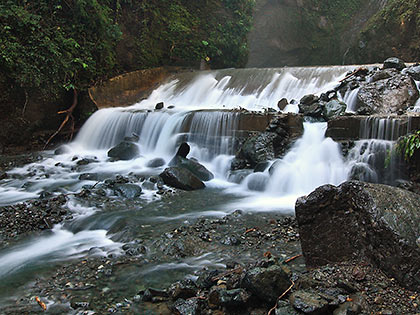 What is Baler without surfing? Still plenty actually but there's no denying that surfing is what placed this town on the tourism map. And the best place for surfing – at least for beginners and amateur surfers – is Sabang Beach. Surfing in the Philippines was born in Baler when the production crew of Francis Ford Coppola's epic film Apocalypse Now left their surfboards behind. The locals who had been observing the actors and crew surfing then picked up the sport and the rest is history. 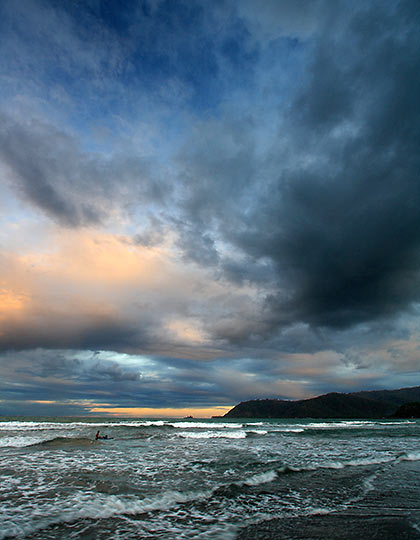 Waves and clouds at Sabang Beach

Sabang is grey sand for the most part but there is a certain kind of beauty to this beach, perhaps because of the sight of waves from the Pacific. Since Sabang Beach faces east, sunrises are what you get to observe here. During one late afternoon, however, we were pleasantly surprised to observe the sunset in the western sky casting its colors to a canvas of clouds to the east, resulting in an interesting display of colors. 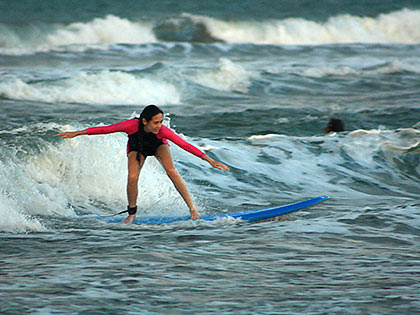 The months of March to June bring in small waves that make Sabang relatively safe for swimmers. Come the amihan or northeast monsoon season from October to February, however, medium-sized waves make Sabang the ideal spot for novice surfers and beginners learning the basics. (Pro surfers prefer Cemento Beach and Cobra Reef.) Since we are not into surfing, however, we simply enjoyed the sight of surfers learning their stuff on the beach.

The baywalk at Sabang Beach

Sabang is where many of the resorts, as well as a good number of cafes and restaurants, are located. An elevated boardwalk makes it very convenient to travel around the beach and has even become some sort of a hangout come early evening time.

Getting There, Going Around

By private vehicle: If coming from Manila, take the NLEX (North Luzon Expressway), then the SCTEX (Subic-Clark-Tarlac Expressway) and exit at La Paz. Take the road going to Cabanatuan City then, just before you enter Cabanatuan, follow the road going to Pantabangan and all the way to Baler. The drive will normally take 5 hours. You will pass by the scenic Pantabangan Dam and a mountainous stretch of the Aurora Memorial National Park where the road becomes steep and winding but negotiable.

By bus: There are regular aircon buses such as Genesis that go directly to Baler for P550 per person. Travel time is 6-7 hours. Genesis also has a Joy Bus option which is a more comfortable non-stop ride complete with wi-fi, pillows, blankets and snacks for P750. They also have a comfort room aboard these buses. Travel time on the Joy Bus is about 5-6 hours. 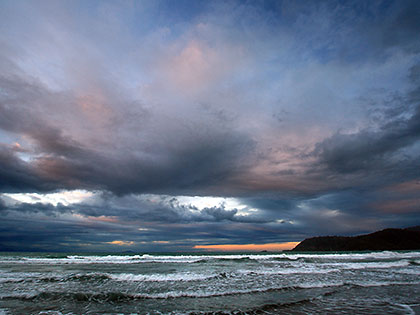 If you're traveling within Baler town, the tricycle will be your main mode of public transport. You can also hire trikes to take you to destinations outside Baler including the Ditumabo Falls in San Luis, the Balete Park & Millennium Tree in Maria Aurora and even Ampere Beach in Dipaculao (1 hour away by trike). The trike drivers double as tour guides. Many will offer tour packages for a day or half a day. Although we had a car with us, we decided to take the half-day trike tour to Ditumabo Falls (plus a visit to the Hanging Bridge and a ride to town for lunch) for P500 per trike (maximum of 3 people per trike). It was a good decision since a car cannot go all the way to the jump-off point for trekking to the falls.

There is a wide range of accommodations in Baler from homestays to luxurious resorts. Many of them are located right on Sabang Beach along with several cafes and restaurants, but there are also a few more located in the town proper and some much further out such as the ones in Cemento Beach, Diguisit Beach and Dicasalarin Cove, all southeast of Sabang. We settled for JamJen's Lodge at Sabang, just a few steps away from the beach. Jamjen's is affordable, clean, well-maintained and run by friendly and accommodating owners and staff.

Our trip to Baler didn't end here. Watch out for part 2 of this series!