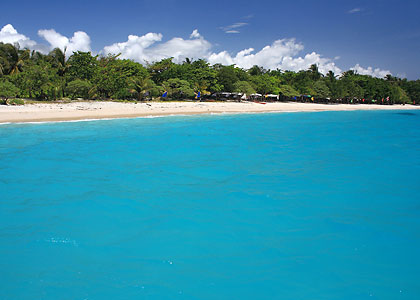 Matnog, the southernmost municipality of Luzon Island, was once described as a place where "you get a boat to go somewhere else." While it's true that this town is the jump-off point for ferries headed to Northern Samar and the rest of the Eastern Visayas, people are finding out that there is so much more to Matnog than just the gateway port it has always been. Case in point: the pink sand islands of Tikling and Calintaan and the Juag Lagoon marine sanctuary. 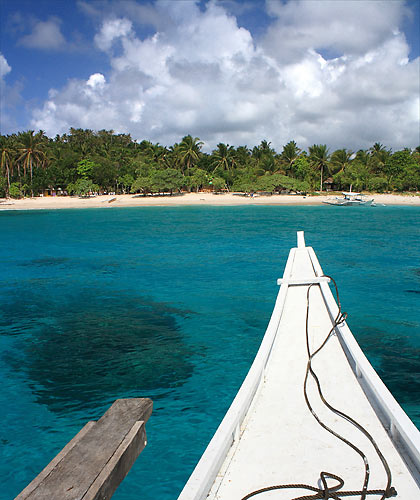 We arrived late in the afternoon at this sleepy port town after a 4-hour journey from Legazpi City, settled down at the Matunog Pension House, then arranged for an island-hopping tour with the Boatcrew and Operators Organization of Matnog the following morning. First on our list was the Juag Lagoon which we reached after just 15 minutes sailing time from the pier near Matnog's public market. And then it was off to Subic Beach on Calintaan Island, just 20 minutes away from Juag. We had to negotiate the rougher-than-normal waves of the San Bernardino Strait on the way. There was a tropical storm headed towards Northeastern Mindanao and the Eastern Visayas and it seemed it was having an effect on the seas on this day. However the blue skies and scattered white cumulus clouds seemed to assure us that the weather would not be that much of a problem. 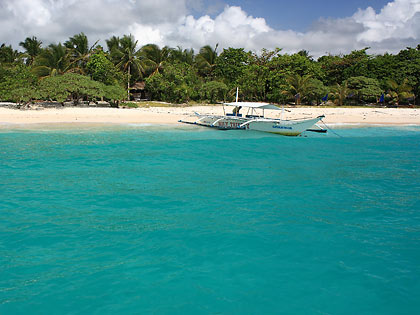 The colorful, crystal-clear waters off Subic Beach and Calintaan Island.

Instead of landing right away on Subic Beach, our boatmen first took us to see the sea caves and rock formations near the southeastern end of Calintaan Island, just a short sailing distance away from Subic. By this time the waves have become more turbulent and it was difficult to get off a good shot of the place. Our boatmen told us that under more ideal conditions the site would have been a great one for snorkeling but with strong waves battering the entrance to the caves all we could do was watch. In just a few minutes we were underway again to Subic Beach. 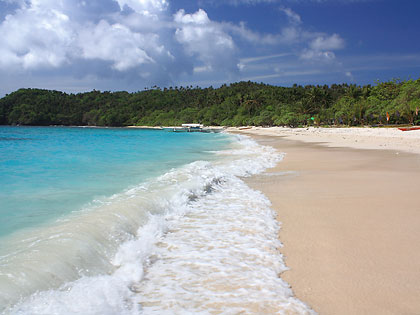 A strong surf pounds the shores of Subic Beach.

Subic Beach is actually divided into two segments. The locals call these appropriately Subic Laki (Subic Big Beach) and Subic Liit (Subic Small Beach). We landed first at the bigger of the two as our outrigger boat glided slowly through aquamarine waters. The waters are actually so clear one can easily observe the sea bed sloping down quite rapidly from shore. It's a good reminder for us to be careful when swimming and to never go down there without our life vests. 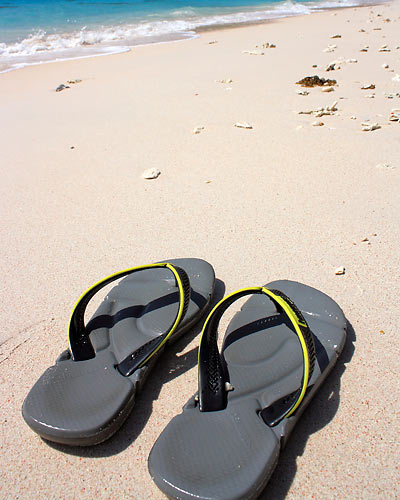 The sand here is quite fine and when viewed from afar it takes on a pinkish-white hue. On closer inspection we could see why: mixed in with the creamy white sand grains are particles of deep red color produced by the crushing of red corals. Along with nearby Tikling Island, this pinkish sand is the unique trait of the islands here in Matnog. 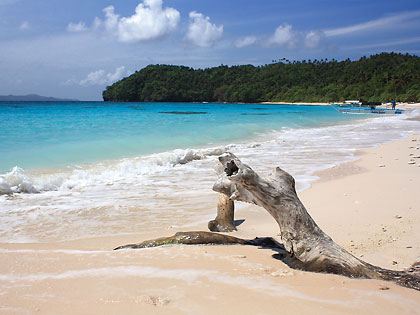 Just like us in our younger days, Leo's nephew Raffy was eager to snorkel, but with a strong surf hitting the shore and the deep slope of the sea bed it was unwise to do so on this day. We decided to explore the beach from end to end and to interact with some of the locals instead. We found a few visitors from other parts of the Bicol region who must have known about these islands since way back… some kids enjoying their innocence and building small castles of pink sand… our lead boatman swapping sea stories and how life was back when he worked in Manila. 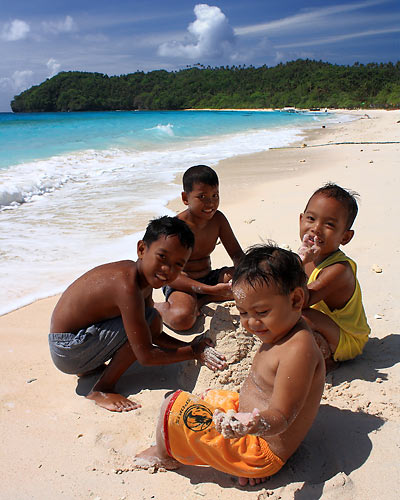 One thing we've noticed is the increasing pace of development here. Several huts and cottages have begun to sprout at Subic Big Beach. Some of these are even air conditioned. This beach is now better prepared to cater to overnight guests at affordable accommodation rates although the food prices must surely be higher than normal. Calintaan Island also has electricity through a wired connection with Matnog town in the mainland. Fortunately, the accommodations are native-style huts for the most part that somehow complements the still-pristine nature of the beach. 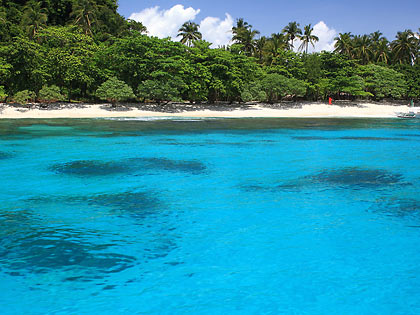 Subic Liit or Subic Small Beach is just adjacent to its big brother, separated by just a short stretch of land. If you were to look at them from a map both beaches are actually adjacent coves hidden from each other's view. This beach appears less developed and quieter compared to Subic Big Beach. There are a few huts, most of them open huts with benches for picnics, and none of the air-conditioned cottages you find in Subic Big Beach. We did not land at Subic Small Beach anymore. Our boat just stopped not too far from shore while we took pictures and enjoyed Subic Small Beach's beauty. Having spent a good deal of our time at Juag Lagoon and Subic Big Beach we were in a hurry to get to Tikling Island and back to Matnog town proper to beat the last ride to Irosin town. 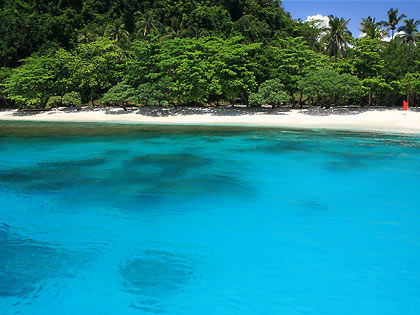 Subic Beach and the other islands of Matnog had been high on our bucket list for some time now. And when we finally got there it did not disappoint. Despite some recent developments the place has retained its pristine charm. We hope it would remain that way for future generations to enjoy. 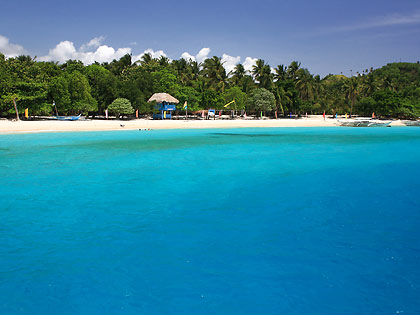 For tips on how to get to Subic Beach, click here.

For accommodations at Matnog, go here.

It should be noted that one can opt to spend a night at Subic Beach instead of at Matnog town. You can just arrange with your boat for this and pay an additional amount on top of the day trip. As noted there are now several accommodations at Subic Big Beach. Staying overnight will give you more time to tour Calintaan Island and its many other delights including the hidden lagoon just at the back of Subic Big Beach and the Parola or old lighthouse located out to sea.

Visit our Flickr page for more pictures on Subic Beach.