The Waterfalls of Nagcarlan and Majayjay 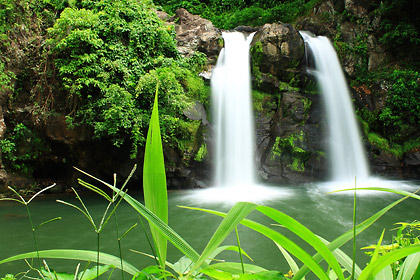 With Leo nursing a bad lower back these past several years and with bone spurs in Nina's knees it has been disappointing to find out that we would have to do a long trek up and down rugged hillsides to get a chance to see dramatic waterfalls in places such as Biliran in the Visayas or Sagada in the Mountain Province. It was therefore a welcome relief when we discovered that some waterfalls in the not so distant province of Laguna were not only relatively close to Manila; they also did not require the feared killer trek to get to them. 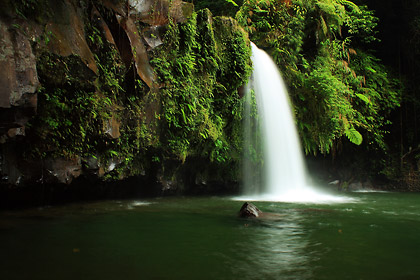 We've already shot the rapids and visited the falls in Pagsanjan but waterfalls in Nagcarlan and Majayjay? Both towns are actually located close to the foot of Mount Banahaw and Mount Cristobal; Majayjay is the last town in Laguna before Quezon province. Both towns, especially Majayjay, still contain a fair amount of forest cover and this setting is where we recently got to enjoy two waterfalls: Bunga Falls in Nagcarlan and Taytay Falls in Majayjay.

We didn't really know the exact directions to get to Bunga Falls but got there via our standard procedure: politely ask the folks around. After driving through narrow roads away from the town center we came to the end of a road in a forest clearing and parked our vehicle under the coconut palms. Bunga Falls was just a 5 to 10 minute trek down a flight of stone stairs. The falls itself is not high but its twin arms flowing into a deep green pool conveys a sense of tranquil beauty. 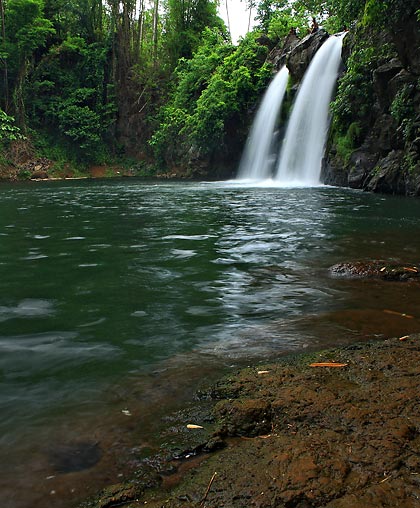 Stories about a mysterious creature snatching unsuspecting victims down to the depths of Bunga's 10-meter basin has long circulated among locals. Even sans the folklore however, we decided not to swim here because of the water's depth and cold temperature. Instead, we just soaked ourselves in the beauty of the surroundings – the rushing stream, the verdant rain forest and the thundering waters of Bunga Falls. We were the only visitors to the falls that day – an added bonus since it meant an easier time for Leo to shoot the pictures on this page. It seems Bunga Falls is still relatively unknown to tourists.

Located at the foot of Mount Banahaw, Majayjay has some fantastic views of rainforests back-dropped by the towering Mt. Banahaw volcano complex (yes Mt. Banahaw is an active volcano). As usual we did not know the exact way to Taytay Falls from the town center but our habit of asking locals brought us to barangay Taytay. Unlike Bunga Falls, the area leading to Taytay Falls has been developed for tourism. There are several stores in the area leading to the falls, a large parking area and even some rooms for overnight stay. An elevated concreted pathway will take you to the falls (a 15-minute walk) with fantastic views of the surrounding forest and the stream from the falls rushing down among the huge rocks below.

Taytay Falls is equivalent to the height of a 2-story building.

About 20-30 feet high with a wide downpour, Taytay Falls is pretty impressive. Much of the surrounding areas are still pristine but the catch basin around the falls has been dammed in and concreted. We learned that Taytay Falls is now being harnessed to irrigate farmlands in the vicinity. We actually saw a concreted irrigation canal that ran parallel to the path to the waterfalls. Because it has been developed for tourism, Taytay Falls had several visitors on the day of our visit – and this was not even on a weekend. Quite the opposite of Bunga Falls. It took Leo quite a long wait before people got out of the way for some of these shots.

There was a considerable number of tourists in the vicinity and it took a while for people to clear the area and help us get some good shots of Taytay Falls.

Still there's no denying the beauty of Taytay Falls. Given more time we could have explored the stream that flows from Taytay as well as the surrounding rain forest. There were several giant ferns, colorful butterflies (the likes of which we have not previously seen) and several different bird species. Since we were on a one-day tour however, we had to leave before nightfall set in for the 3 hour drive back to Manila.

If you're coming from Manila there are three options to get to Nagcarlan and Majayjay:

Option 1 (via Sta. Cruz): Take the South Luzon Expressway (SLEX) and drive all the way to the Calamba exit. From Calamba, drive to Sta. Cruz, then to Pagsanjan. Just a short distance from the Sta.Cruz-Pagsanjan boundary you will see Jolibee along the main road. Turn right and drive straight ahead until you reach Majayjay town. From Majayjay you can reach Nagcarlan by driving towards San Pablo; you'll pass the town of Liliw first before reaching Nagcarlan.

Option 2 (via San Pablo): Take SLEX and exit at Santo Tomas. Drive all the way to San Pablo City and from the latter take the road to Rizal, Laguna. After Rizal on the same road is Nagcarlan, then Liliw and finally Majayjay.

Option 3 (via Calauan): Take SLEX, exit at Calamba and proceed all the way to Los Banos, then to Calauan. At Calauan take the diversion road going to Nagcarlan. 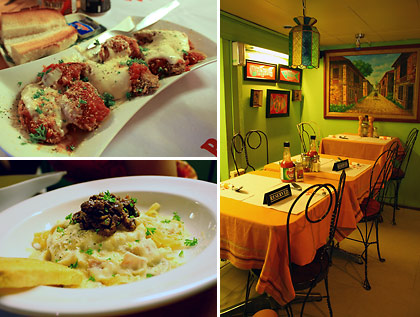 Arabela in Liliw has a cozy interior and serves good Italian cuisine.

Both Nagcarlan and Majayjay have other attractions. Nagcarlan has its famous Underground Cemetery and St. Bartholomew's Church. The large church at the town center of Majayjay is also worth a visit. Between Nagcarlan and Majayjay is the town of Liliw, a good place for a quick stop. You may want to try the different shops selling colorful but inexpensive slippers that this town is famous for. Check out the beautiful red church near the town center. For dining, try the famous Arabela Italian Restaurant for its Italian cuisine. This is where we had our lunch and the food, especially the pasta, was very good. We also had the best eggplant parmigiana we've ever tasted here. Beware the low headroom though. The restaurant sits on the ground floor of a traditional Filipino house that was probably used in the past for storage purposes and not originally meant to be occupied by people. You can also try the Chef Mau Restaurant on the road to Sta. Cruz. If you still have time and are going back to Manila via Sto. Tomas, you can pay a visit to any of the seven lakes in the San Pablo area especially Lakes Pandin and Yambo.