It might be just a 2- to 2.5-hour drive from home but the city of San Pablo, Laguna has not figured prominently on our travel radar until fairly recently. Despite passing by this city on the way to destinations in Quezon and the Bicol provinces over the years, it was just last year when we really stopped to spend time here. Our main reason? San Pablo's Seven Lakes.

Located in the area between dormant volcanos Mt. Makiling and Mt. Banahaw, these lakes – termed maars by geologists – are low profile craters created by volcanic activity. Water subsequently filled up these craters and created the Seven Lakes of Sampaloc, Bunot, Palakpakin, Mohikap, Pandin, Yambo and Calibato, each of exceptional depth. We've known the existence of these lakes for a while but finally decided to pay them a visit starting last year. Eventually we got to visit 6 out of the 7 since, although our frequent visits down south from the city could allow us to easily cover all 7 within a few more months. 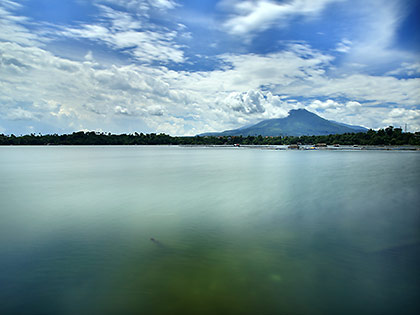 Lake Sampaloc is the largest of the Seven, the closest to the city proper and also the most accessible and popular. Equipped with a view deck and lakeside walkway, this lake continues to draw crowds from the city. As a result several business establishments including cafes, food stalls and restaurants have sprouted around the lake. Unfortunately, Lake Sampaloc is the least clean of the lakes because of the large number of houses along its shores and fish pens on the lake itself. 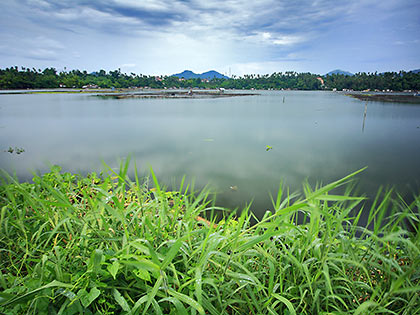 Lake Bunot at a serene moment

(For more pictures of the Seven Lakes visit our Flickr album)

Lake Bunot is the next closest lake to San Pablo City proper. Like Lake Sampaloc it too has been spoiled by the many fish pens and houses along its banks. One thing Lake Bunot has going for it, however, is a restaurant-café located on its shores that provides good sunset views of the lake itself: Cusina de Sabang. The lake is best viewed from this restaurant. To get here by private vehicle, turn right on Sabang Road in Barangay Concepcion from the main road from San Pablo going towards Nagcarlan (the Werner Schetelig Avenue). Apparently you can also take Carmelita Road, just off the main road, to get to this lake. 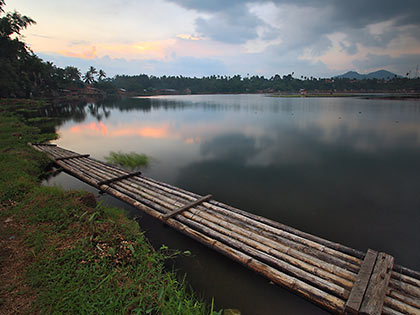 Lakes Pandin and Yambo are sometimes called the Twin Lakes because of their proximity to each other. Both are more pristine than the two previously mentioned lakes and probably the most beautiful among the seven with the possible exception of Lake Mohikap. To get to Lake Pandin, take the main road out of San Pablo going to Nagcarlan and look for the Lake Pandin sign on the left side of the road. There is a parking lot where you can leave your car and walk the kilometer or so to the lake. If commuting, take a jeepney bound for Nagcarlan/Liliw near the cathedral at San Pablo proper. The jeepneys will pass by the parking lot (15-20 minutes travel time). Everyone will have to walk to get to the lake from this point. The first time we went here we paid for rides on motorbikes but those have since been banned as they tended to frighten the horses that are also using the trail to the lake. 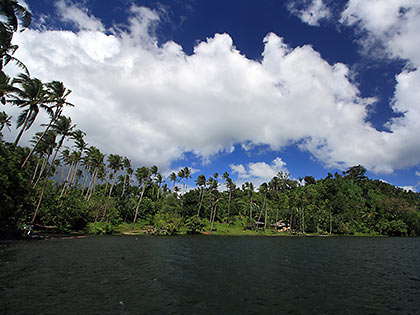 As you reach the end of the trail and descend down a slight rise of ground to get your initial view of Lake Pandin, the first thing you notice is the cluster of floating huts on bamboo rafts at the lake's edge. The association of enterprising local fishermen and their wives have organized rafting tours of the lake with a lunch option. The tours are well organized and visitors are given life vests for safety. The cost of the tour without lunch is P180 per person. Lunch would cost another P180 and consists of paco or fiddlehead fern salad, grilled tilapia, shrimp cooked in coconut milk, rice and coconut juice fresh from the shell. 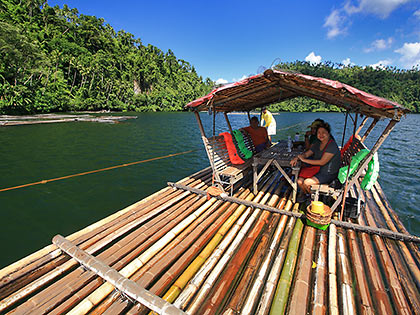 While you enjoy lunch the raft crew will ferry you over the placid waters of the lake and into the opposite shore. Lake Pandin's waters change colors depending on the season. The first time we were here – towards the end of summer or the dry season – the water was a pleasant emerald green. When we next visited in November of this year the water had turned into a deep olive shade.

Lake Pandin's colors at the close of the dry season

The other side of the lake offers some surprises such as thick and huge vine hanging out from one of the trees on the shoreline that people can use for a swing and a nearby grotto. The biggest surprise though is the presence of Lake Pandin's twin – Lake Yambo – which can be viewed by climbing a steep rise of ground from this side of the lake. It's not a difficult climb and it wasn't long before we were enjoying a picturesque view of Lake Yambo. Incidentally, Lake Yambo may also be reached by avoiding the raft tour and simply walking around Lake Pandin. There is also a road from Nagcarlan town that goes all the way into the shores of the lake. From our vantage point at the hill above both lakes we could actually spot the road as it ends on the lake's banks. 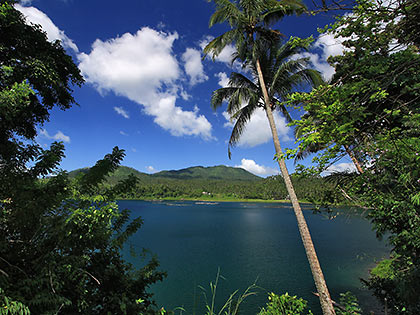 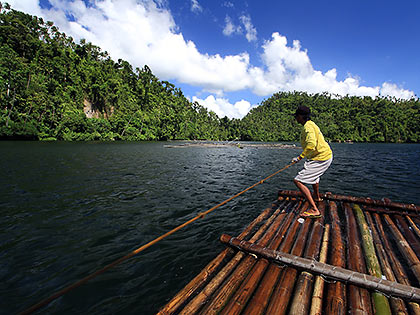 On a windy day, the rafts at Lake Pandin are simply pulled by ropes across the width of the lake to the other side

The next set of lakes lies to the east of Lakes Pandin and Yambo: Lakes Palakpakin and Mohikap. Both lakes are the farthest from the main San Pablo-Nagcarlan road. Lake Palakpakin is located in Bgy. San Buenaventura and is closer to the main road than Lake Mohikap. When traveling from San Pablo proper turn left from the main road on the Barangay San Lorenzo Road. This point is just before the Lake Pandin signage and parking lot. Driving along this road will take you along the shores of Lake Palakpakin and into a bridge between Bgys. San Buenaventura and San Lorenzo. This bridge offers the best view of the lake, with Mts. Banahaw and Cristobal as a backdrop. We took time to get down to the lake's shores and chat with the fishermen and their families living in the area. If you are not driving you can simply take a trike from the main road to get here. 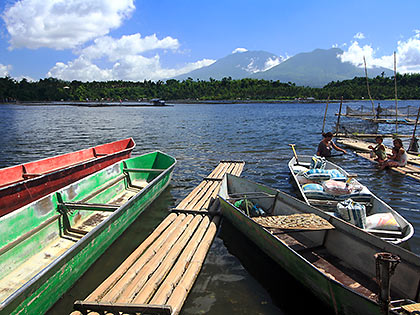 Lake Palakpakin with Mts. Banahaw and Cristobal in the background

The next lake, Lake Mohikap (sometimes spelled Mojicap or Mohicap) is not too far off. After viewing Lake Palakpakin, we simply continued on the Bgy. San Lorenzo Road until we reached a dead end, then turned right on Dolores Road. (Incidentally, taking Dolores Road in the opposite direction will bring you to Lake Sampaloc.) While trying to decipher our Waize and Google Maps apps we somehow ended up parking on the side of Dolores Road about 2 kilometers from the bridge at Lake Palakpakin. Turns out we parked at the exact spot from where we could pass beside a few houses before beginning the descent into Lake Mohikap on a very steep, concreted stairway.

Lake Mohikap is a picture of serenity

The walk down was short – around 5 minutes – but the walk back up had us huffing and puffing. The view of the lake, however, with its still, green waters and a surrounding verdant forest, is well worth the effort. Lake Mohikap would battle toe-to-toe with Lakes Pandin and Yambo for the most beautiful of the Seven Lakes. 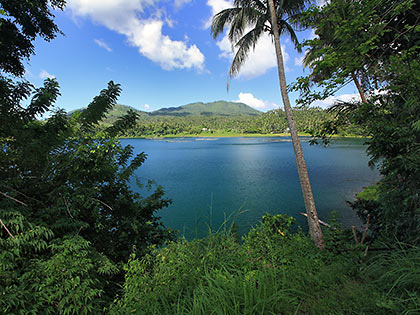 A last look at Lake Yambo

Lake Calibato in Barangay Sto. Angel is the farthest of the Seven Lakes from San Pablo proper and actually touches the boundaries of Rizal town. Trekking is required to get here – probably a short 15-minute hike. The start of the trek to this lake is less than a kilometer from the Lake Pandin signage and parking lot and is on the right side of the road when coming from San Pablo proper. We have yet to get here and are looking forward to visiting this lake in the near future. And maybe add that drive to Lake Yambo's shores from Nagcarlan.