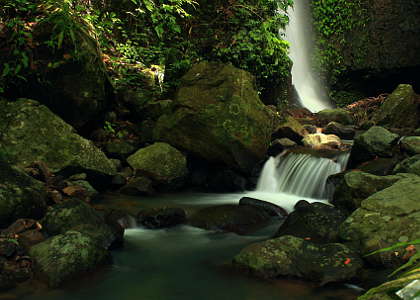 Lying at the foothills of the Sierra Madre range and Mounts Banahaw and Makiling has its own advantages for Laguna. The many streams and rivers from these surrounding hills and mountains have created numerous waterfalls all over the province. So, while Laguna may be famous for its Pagsanjan Falls (indigenous name Magdapio Falls), there are dozens of other falls with most towns having at least one. Kalayaan, a municipality located between Paete and Lumban and lying along the shores of Laguna de Bay, is one such place. Although the Kalayaan Twin Falls is not as well-known as other falls in the province we've seen enough of it in photographs that we decided on a visit.

After a scenic drive through the hills of Pililia and along the shores of Laguna de Bay we arrived at Kalayaan just before lunch time. The Kalayaan Twin Falls is nestled within a barangay-operated resort that had been renovated the previous year (2012). The resort itself is just a short drive away from the national highway or the Manila East Road and can even be reached on foot – albeit via an uphill trek – from the same roadway. Immediately upon entering the resort we noticed two falls along a stream leading away from the resort and flowing straight into Laguna de Bay not too far away. But we already knew beforehand that these two falls were NOT the Twin Falls we came for.

One of the falls that drain into the resort pool; this is probably the smallest in the whole area.

The centerpiece of the resort is a huge swimming pool that is fed directly by two waterfalls (one big and one small). The pool water was not very clear due to recent rains that have muddied up the stream feeding the falls. The caretakers though seem to be doing their best to keep the pool and its surrounding premises clean. We did read from a previous account that there used to be a large catch basin filled with huge rocks in what is now the pool area. Looking into the pool today we couldn't help but think how much more beautiful the place would have looked like had the developers kept that basin intact and just made it more accessible and swimmable. Anyway the two falls here were still NOT the falls that we came for. 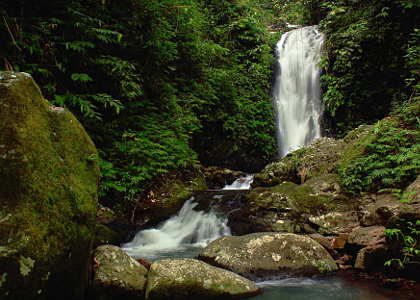 The first of the two waterfalls we encountered on our way up from the resort pool area.

To reach our ultimate objective we had to ascend a series of concreted steps at the back of the pool area. Due to the recent rains part of the way up was slippery. We let one of the caretakers help us on our short uphill climb and he was especially helpful in lugging camera equipment. Our ascent brought us into a forested area where we finally we encountered the first of the two waterfalls that we came here for. It was a medium-sized falls that fed into a small but deep catch basin with smaller cascades that meandered their way through large rocks scattered all over the stream bed. Some huge boulders stranded along the stream gave an indication of past floods that have sculptured the landscape of this place. Here and there colorful butterflies playfully teased us as we waded into the cold stream running from the falls. 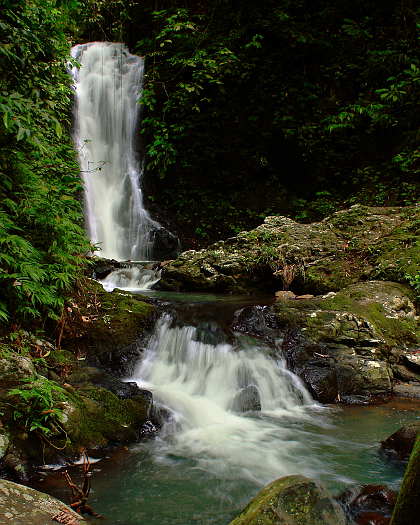 Another view of the first of the two falls upstairs from the pool area.

Another short ascent from the falls above and we were soon at the last of Kalayaan's Twin Falls. This last waterfall is much taller than the previous one and its catch basin was peppered with rocks that produced a host of smaller cascades (see topmost picture). It would have made for a really excellent photographic subject except for a considerable amount of debris from a previous flooding. We – along with the resort caretakers – were also disappointed by pieces of garbage that were left behind by visitors during the weekend. Nina suggested that the caretakers adopt a policy of not allowing visitors to bring foodstuff on their way up to the two falls and to let them eat at one of the many tables by the pool area below instead. Still visitors will do well to take responsibility themselves for helping preserve the beauty of Kalayaan's Twin Falls. 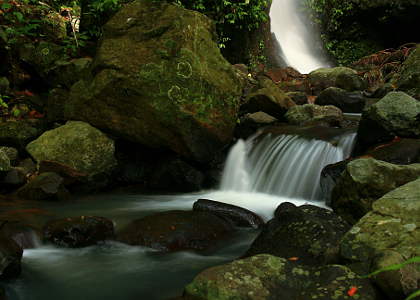 The water from the catch basin of Kalayaan's biggest falls (in the right background) meanders its way through a rock-filled stream bed.

We finished our tour of the Kalayaan Twin well past the lunch hour so it was imperative to find a dining place really close by. We decided on Exotik Restaurant which was a short drive away and right along the national highway. We've seen images of this restaurant with four levels of nipa hut cottages set amidst finely landscaped grounds and with a nice view of Laguna de Bay. We realized on arriving, however, that a previous typhoon had wrought havoc on the two upper levels (probably causing a landslide that destroyed the huts and other facilities there) leaving only two levels operational. The landscaping was still quite good, however, and two caged pythons were still around – one of them a rare albino. But we were here for the food. Exotik serves mainly local cuisine and, as their name suggests, they also serve wild game: namely snake, wild boar, deer and frog dishes. We inquired about the monitor lizard (local bayawak) but were told they had removed it from their menu as no more could be found in the area. (Perhaps overhunting of the poor creature by people looking for an exotic pulutan.) But since not all of us were adventurous with such a cuisine we simply opted for Exotik's more traditional and less exotic fair – and they did not disappoint.

By private vehicle: Kalayaan town may either be accessed through the "backdoor" – the Manila East Road that runs through the towns of Morong, Tanay and Siniloan on the northern shores of Laguna de Bay – or via the South Luzon Expressway (SLEX). If using the "backdoor" route, just drive all the way to Kalayaan town along the Manila East Road. You will pass through the towns of Siniloan, Pangil, Pakil and Paete before Kalayaan. If using the SLEX route, exit at Calamba and drive all the way to Pagsanjan town. Just after the welcome arch at Pagsanjan take a left turn towards Lumban. Kalayaan is the next town after Lumban along the National Highway.

In Kalayaan look for the San Juan Evangelist Parish Church along the National Highway (Manila East Road) in Barangay Longos. This church is almost across the road from a Globe cell site. Beside the church building is a road heading slightly uphill towards the resort in Kalayaan. You can drive uphill and park near the entrance to the resort.

Commuting: If you're coming from Metro Manila, take abus going to Sta. Cruz. At Sta. Cruz take a jeepney going to Paete and ask the driver to drop you off along San Juan in Kalayaan town. The jeepney ride will take about 20-30 minutes. You can then take a tricycle near the San Juan church to take you up to the resort or simply walk going up if you want a little exercise.