Baler: It's More than Surfing, Part 2 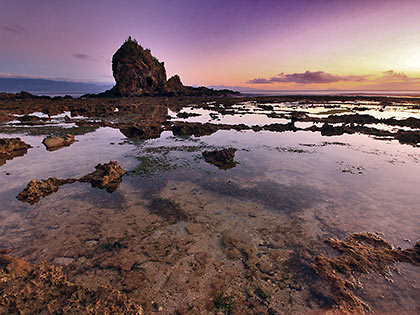 Our car was waved down by a little girl holding a handheld radio on the side of the road. Puzzled and amused we surmised that she must be the one controlling traffic on this end of the road going up the hill towards our destination. We've heard that the people here have a system in place to ensure that only one car will be on the road at any given time. Fine. But a little girl?

The road going up the hill overlooking lovely Dicasalarin Cove is winding, steep and just wide enough for one four-wheeled vehicle, thus the reason for such a system. It turned out that the guy controlling the traffic at the foot of the hill had to go to the john and got his young daughter to temporarily take over. She was soon waving us on. Eventually we made it to the main entrance gate uphill, then drove downhill to the cove itself. Along the way we were treated to spectacular panoramic views of Dicasalarin Bay and Cove. 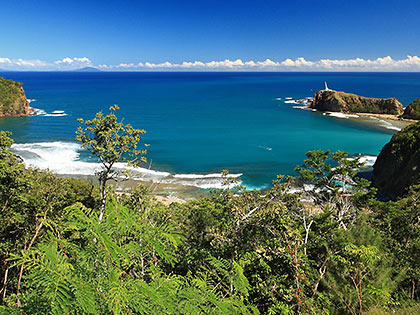 (For more pictures of Baler visit our Flickr album)

Dicasalarin Cove is just one of the many scenic destinations outside Baler town proper. It is probably the most picturesque of all (although we're somewhat holding off on this one until we see Dibut Bay and its coves in San Luis). The cove is owned by the Angaras who have built a small resort inside as well as an Artists' Village. It is however open to the public for a P300 fee (P150 if you're a guest at their Costa Pacific Resort). It's almost imperative that you get on a car to make it to Dicasalarin. Trikes for hire will not go up on the steep and twisting road. 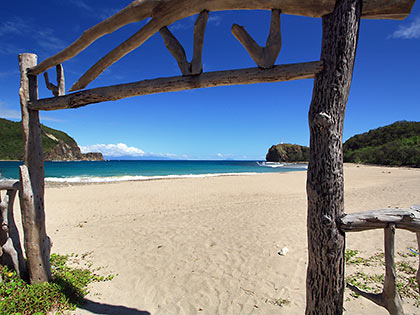 Entrance arch to the beach at Dicasalarin Cove

Dicasalarin has a beautiful creamy white sand beach ringed by cliffs and turquoise waters. It's a short walking distance from the restaurant near the parking area at the end of the road. The waves are especially strong at this time of the year, although not as strong as the ones at Sabang Beach, but still hardly a place for swimming. We were therefore surprised to see someone in swimming attire and looking as if she had just taken a dip. 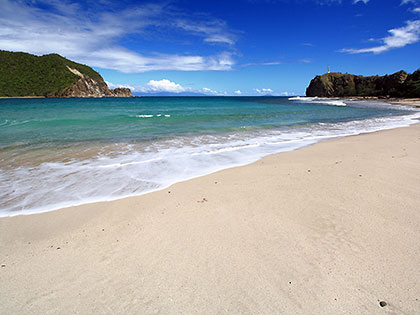 The beach at Dicasalarin Cove. The Baler Lighthouse is at the top of the cliff on the right.

At the far right end of the cove and up a cliff is the Baler Lighthouse, an intriguing piece of architecture. 180 concrete steps lead up to the lighthouse from where one can get another panoramic view of the cove. Unfortunately we did not make the climb. We decided against it after ascending all the way to the top of Ermita Hill earlier in the morning. 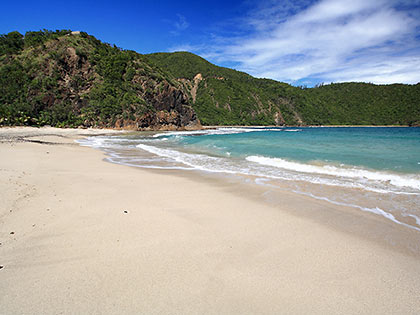 In retrospect we should not have gone all the way to the top of this hill, the highest point of Baler – at least to give us more energy for a possible climb to the Baler Lighthouse. The views from two observation decks at the level of the parking area were good enough. But upon asking a guy at the parking lot we thought he meant that the best views were even further up – at the peak of Ermita Hill where a huge white concrete cross sat. A long uphill flight of concreted steps led that way. 275 exhausting steps later we found the cross alright but no panoramic views. A thick growth of shrubs and trees blocked views in every direction.

Disappointment aside, we headed back to the view decks near the parking lot to enjoy the panoramic views of Baler Bay and Baler town but also thought for a while about a tragic event that took place here in 1735. A tsunami swept through Baler in the wee hours of December 27, wiping out the town and snuffing out the lives of its citizens except for a few families who managed to swim through the raging waters and climb up Ermita Hill to safety. The Tromba Marina sculpture at the bottom of the hill is a memorial to these survivors.

The road from town that leads to Ermita Hill and Dicasalarin Cove also passes by another attraction on the coast. Diguisit Beach like Dicasalarin Cove's beach has creamy white sand, although much coarser than Dicasalarin's. The real star of the show at Diguisit, however, are its stunning rock formations. Nearest to the beach are the Lukso-Lukso Islets, three rocks islets that are easily accessible on foot at low tide. The islets – with the waves of Baler Bay smashing against them – make for some stunning shots at sunrise. 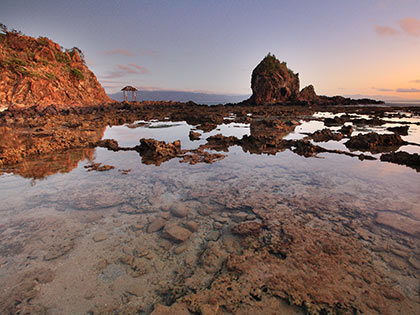 We visited Diguisit twice, once just before sunrise and the other time on our way back to Baler town from Dicasalarin Cove. Apparently the reef here offers splendid snorkeling opportunities but the crashing waves just make that impossible during the amihan season. 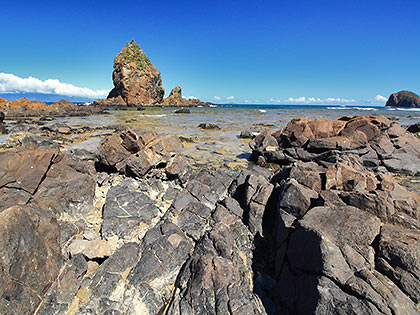 A little further east along the coast are the larger Aniao Islets, two small islands located just offshore from Diguisit Beach. Both small islands contain vegetation growing on their upper surfaces. Prior to this trip we thought that these islets can also be reached on foot. One look at the islets and the surrounding waters however, we realized this was not the case, although the nearest islet seems accessible at low tide and when the waves are not as strong. 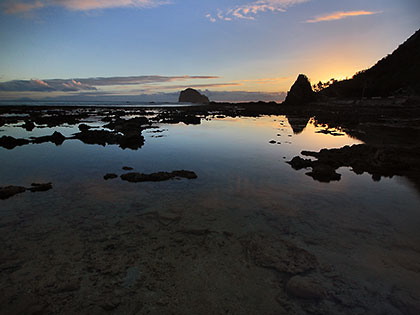 That afternoon we paid a visit to the historical sites in Baler, then left for Manila the following morning. With more time we could have visited more attractions. Just near Diguisit Beach and on the opposite side of the coastal road are the 3-tiered Diguisit Falls. We saw the last tier of this waterfall at the side of the road but didn't have enough time to stop and look further. Just west of Diguisit Beach and close to the fishing port is Cemento Beach. Cemento is popular among advanced surfers for its large and excellent quality waves. Unlike Sabang Beach, which is almost pure sand, Cemento Beach includes crushed corals, making it less safe for novice surfers and beginners. Within Cemento Beach is Cobra Reef where waves can go as high as 14 feet, making it a favorite of pro surfers. A few meters offshore is the Dimadimalangat Islet, a beautiful rock formation that is also accessible on foot at low tide. Like the Lukso-Lukso Islets it offers splendid photo opportunities especially at sunrise. We at least saw the rock islet as we sped down the coastal road on our way back to Baler town from Diguisit Beach.

Beyond Baler are still more attractions. We already visited the Ditumabo Falls in San Luis, but this town also has the less spectacular but more accessible Caunayan Falls. Dibut Bay, also in San Luis offers several attractions in the form of rock formations, islands, beaches and imposing cliffs. The very few pictures we saw of Dibut Bay made us really interested in this place but we have yet to find out how to get there as it is still pretty much off the beaten path.

We were planning to visit the Balete Park and Millennium Tree in Maria Aurora town on our way back to Manila but decided to forego this visit after deciding to have lunch in Pampanga. The 600-year old tree is said to be the biggest of its kind in Asia. It's also easily accessible, located just off the main highway from Pantabangan to Baler. 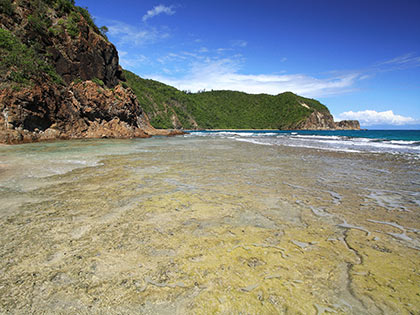 Another beach we had initially planned to visit but never got around to doing so is Ampere Beach in nearby Dipaculao town, favored for it round, smooth stones and rock formations. It's roughly 30-40 minutes away by car (or an hour by trike) from Baler town proper. Farther away are Borlongan Beach and Dinadiawan Beach. The latter is a long stretch of white sand beach, 63 kilometers away from Baler.

We've only scratched the surface as far as touring Aurora. Even just in the area around Baler there are still destinations waiting to be explored. We can't wait to visit this place again.

For information on how to get to Baler and around, visit this page.