Batad: An Amphitheater of Rice Terraces 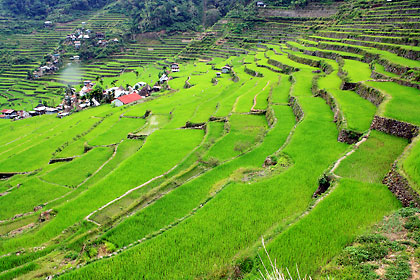 It was late in the morning when we arrived at the village entrance. It was almost an hour's hike from the Saddle where the jeepney had left us in the hands of our wiry local guide. As we trudged the last few meters into the village and past the entrance, a sight until now hidden from our view suddenly emerged: an amphitheater of rice terraces almost yellow-green from ripening rice stalks.

(Click on the pictures for a larger size version.) 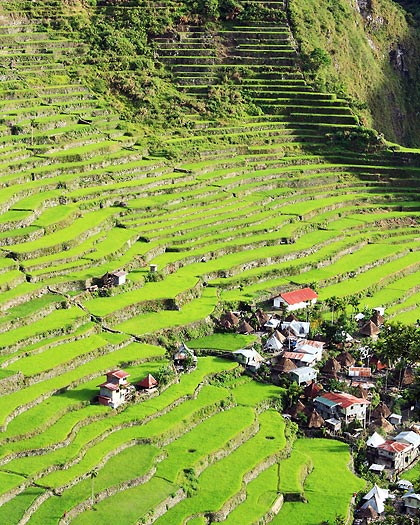 In the past the rice terraces in Batad has played second-fiddle to its more famous brother in the poblacion of Banaue. The latter has often graced postcards and elementary school textbooks and was the iconic representation of the rice terraces in Ifugao, the Mountain Province and other provinces up north. But gazing at the view before our eyes it was obvious that the terraces in Batad is a winner. I learned somewhere that the Banaue poblacion terraces, contrary to popular belief, is not a UNESCO World Heritage site. But Batad and 4 other terraces, all in Ifugao, (Bangaan, Mayoyao, Hungduan and Nagacadan) are.

After taking in the beauty of the terraces we hopped over to Simon's Inn. Simon's, like most other inns in Batad offer basic accommodations but has a fantastic view of the terraces below. After resting and taking lunch we were off for a closer look at the terraces and the village below. 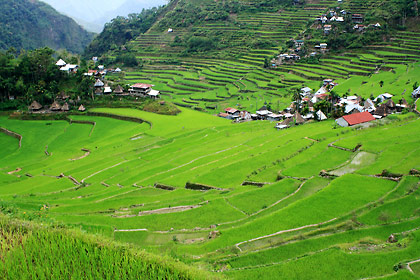 Part of the fabulous "amphitheater" of rice terraces in Batad showing clusters of houses below.

The hike that followed was not a walk in the park. Besides having to scale a few steep slopes we had to do a delicate balancing act in walking along the edge of the terrace embankments. One mistake and we could have dropped down almost 10 feet into the next paddy below. A drizzle that made the walk slippery further complicated our trek. But you can only appreciate the effort that the ancient Ifugaos put into building these magnificent structures by admiring them from up close. It's amazing to even think that the natives carved these terraces from the steep hillsides by hand, walling the terraces using embankments of rocks and stones nine feet high held in place by clay. Some 2,000 years later, their descendants have continued the practice and maintained the beauty of the landscape. 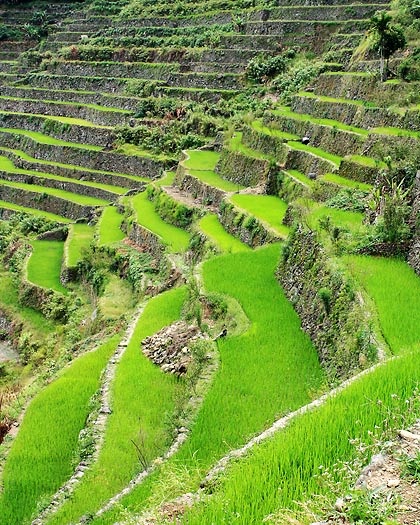 A closer view of the rice terraces, Batad.

At the time of our visit there was a typhoon that hit Bicol and caused some flooding in Metro Manila. Fortunately it only rained intermittently in Batad during that time. Whenever the rain intensified we would stop at some houses along the way. This is the advantage of having a guide who knows almost everyone else in the village and who could ask to stay inside the houses until the rain stopped. In one of them we were even able to watch a round of the Pacquiao-Mosley boxing fight! Our guide, Manong Jun, also taught us how to use banana leaves as makeshift umbrellas.

We were supposed to go to the Tappiyah Falls for our last destination on this trek but we got too tired and opted to just return to our inn. We had hardly slept on the 8 hour bus ride from Manila, had to take another hour of jeepney travel then do an hour-long hike from the Saddle to Batad village – all before we even did this trek. And we've been told that the final leg to the falls was a killer hike, as some Aussies that we met affirmed. In retrospect we could have spent two nights instead of just one in Batad – by resting the first day after our arrival, doing the trek among the terraces and to the falls the next day and then returning to the Saddle for the journey back to Banaue on the third day. 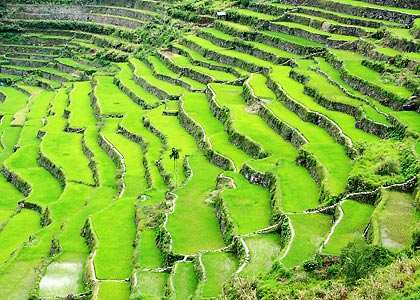 We rested our tired bodies that evening. I probably had the most restful sleep in years but I can't help but think that all the effort we expended to admire the beauty of Batad was well worth it. The next morning we woke up to see the sun cast its early morning glow on the terraces, a really spectacular site, turning the color of the rice plants to a golden yellow. You hate to leave a scene this majestic but we had a bus to catch later that day. Still it was a fitting finale to one of the most remarkable vistas we have come across in our lifetime. 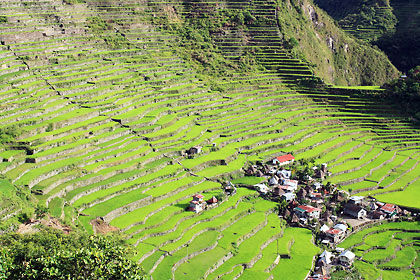 Early morning sun casts its glow on the terraces and a village below.

The first step is getting to Banaue. If you're going by private vehicle from Manila, take the north Luzon Expressway and take the Sta. Rita exit to go all the way to Solano, Nueva Vizcaya through the Maharlika or Pan Philippine Highway. You'll pass through Cabanatuan and San Jose, Nueva Ecija, cross the Dalton Pass at Santa Fe and drive past Bayombong, Nueva Vizcaya before Solano. The highway goes on to Bagabag past Solano. At Bagabag look for the road going to Banaue (the Bontoc highway). You'll pass by Lamut and Lagawe before reaching Banaue town proper. Banaue is about 370 kilometers from Manila. 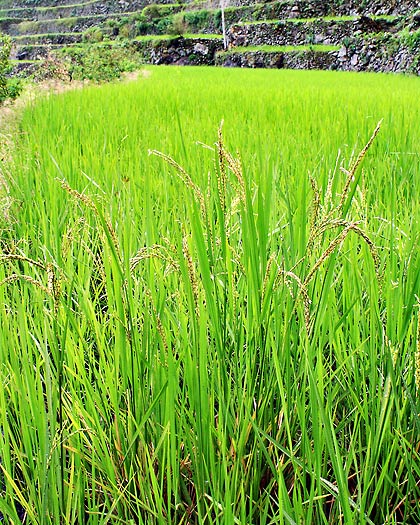 If you're going by bus: From Manila the only bus now going direct to Banaue is Ohayami Trans with buses leaving for Banaue from their terminal at the corner of Fajardo and Lacson streets in Sampaloc. Buses leave at 9 and 9:45 PM every day. Apparently there is more than one bus leaving at the same hour. The trip normally takes 8 to 9 hours. (We found it is good to bring a jacket or sweater along as the aircon on the bus can get too cold and for some reason the drivers can't or won't turn down the thermostat.)

Batad is a village within Banaue but is located about 18 kilometers from the poblacion or town center. So at Banaue you can hire a jeepney or tricycle to take you to the Batad Saddle. You can check with the Banaue Tourism Council for this (they will also guide you about the official rates for travel to Batad and the other terraces in the vicinity such as Hapao, Bangaan and Mayoyao). A significant portion of the ride is over rough stretches of road so I would prefer a jeepney to minimize the effects of a bumpy ride although it is of course more expensive. There is also a regular jeepney service that leaves Banaue for Batad between 9 and 10 AM but if you can't catch this you will just have to hire a private jeepney which is again more expensive. The jeepney ride usually takes an hour.

From Batad Saddle you can already catch a glimpse of part of the terraces in Batad but you will have to hike for 45 minutes to an hour to get to the village and a grander view of the terraces. You can hire a porter to carry your bag if you want. There are also walking sticks for rent at the Saddle which I will recommend especially for non-experienced hikers. The hike is downhill for most of the way and the slopes are not that steep except for an initial stretch. There are huts located along the trail for rest and even refreshments. (We ended up buying plenty of water and Gatorade on both trips to and from the Saddle.) I will not recommend this hike for people with heart ailments. 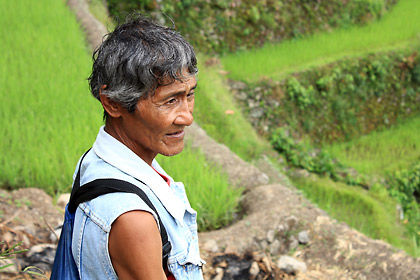 Manong Jun, our Batad guide. A native of Nueva Vizcaya, he married a native of Batad and has moved here ever since. Some of their children are beginning to do their studies in Metro Manila.

At Batad you can best enjoy the scenery by taking a tour around the terraces and visiting the village at the bottom of the amphitheater. This is not a walk in the park and can be exhausting for those who are not fit. You don't need a guide but it is a big plus to get one because he would know the way around the terraces and can take you through people's backyards part of the way. You can include a hike to the Tappiyah Falls but since this requires a climb through an almost vertical slope it can be a killer trek for people not used to hiking. We were too exhausted by the time we arrived at the jump-off point to the falls so we opted to forego this trip. As I mentioned before I would have preferred to go to Batad on the first day, rest, sleep overnight then do the trip around the terraces, to the the village and the Tappiyah falls below on the second day. Then we could make the return trip to the Saddle in the afternoon or even the next day depending on our physical condition. The return trip to the Saddle is uphill so it would take longer than the hour or so it usually takes to go the opposite direction. Remember to bring along extra medication (there are no drugstores in Batad), an extra change of clothes for the hike and a water bottle.