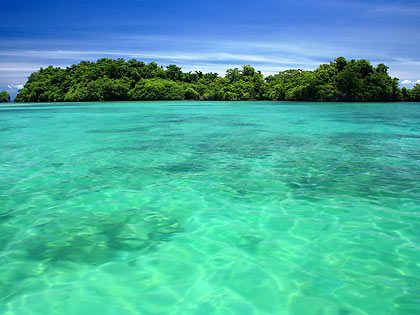 We had barely left the creamy white sand beach of Alubihod when we noticed that something was not quite right with our rented motorized outrigger. It was a fine Monday morning when we left Raymen's Beach Resort for our island-hopping trip, the sun was up and the waters of the Panay Gulf unusually calm during this time of the year. And yet our boat, even while equipped with a new engine, was plodding along at the majestic pace of 5 kilometers per hour. Worried, we asked our two boatmen if there was any problem. They replied that this was usually the case with the new engines but assured us that all was well. 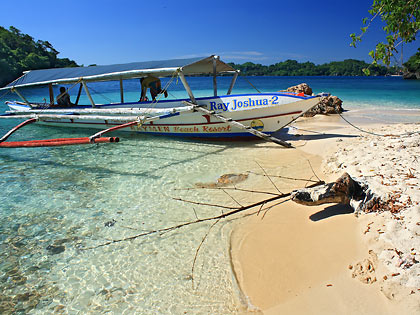 We had chosen to stay at Raymen's in Alubihod because it is the most popular jump-off point for island-hopping in Guimaras with some of the islands or islets just 15 minutes away. But at the rate we were going these islands seemed to be much further away now. We tried not to let our boat's situation affect our disposition. Fortunately our first destination soon appeared on the horizon: Ave Maria Islet. 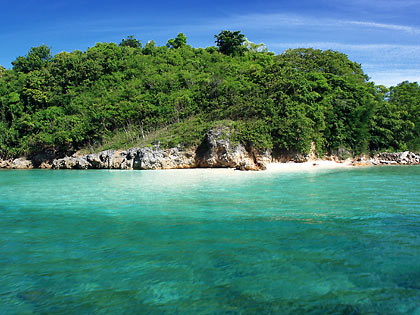 A part of Barangay Lawi in Jordan, Ave Maria Islet has a beautiful curving white-sand beach with a sprinkling of coral rocks. It has very fine, white sand surrounded by crystal-clear turquoise waters. Ave Maria Islet is also uninhabited so you won't find any dwellings here except for an abandoned and run-down native hut. 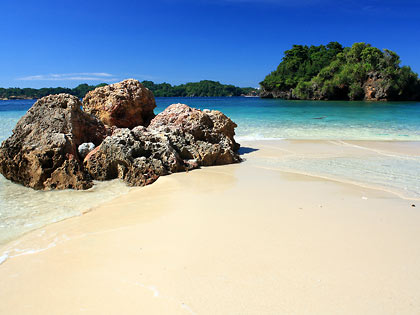 As our boat slowly glided into Ave Maria Islet, a sea turtle gliding in shallow waters off the islet, dived into deeper water and disappeared before we could come close. It was high tide and a large part of the charming sandy beach was submerged. We've seen pictures of this beach before during low tide and we have to say that it is the best in this part of Guimaras. We spent a good deal of our time swimming in the shallow waters around the beach. Leo also went further out to snorkel, guided along by one of our boatmen who took a piece of bread with him to encourage the fishes to come out.

Swimming and snorkeling over we were off to Pawikan or Turtle Island which is just across from Ave Maria Islet. We've read elsewhere that it might be possible to walk or swim across to Turtle Island from Ave Maria Islet during low tide. That's how close to each other these two islands are. We also noticed that our boat had finally began to move much faster and never did experience its initial problem for the rest of the trip. It was futile to worry after all. 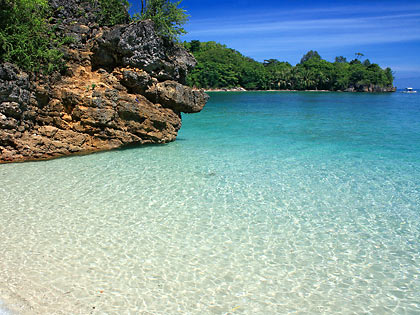 There is a small fee of P5 per person at Turtle Island, so named because the island used to be a sanctuary for sea turtles. That sanctuary have since been transferred to the Sea Turtle Feeding and Caring Station also in Barangay Lawi, Jordan. Turtle Island has a wider beach front compared to Ave Maria Islet although its sand is not as fine. It shares the same waters as Ave Maria Islet so it is also possible to swim and snorkel in the clear waters. 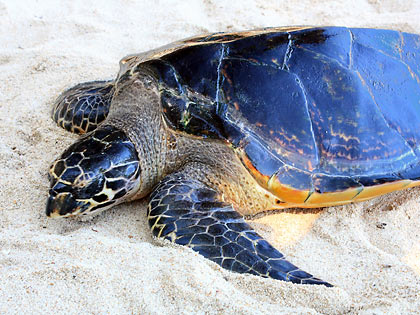 The turtle sanctuary might have moved but there is a lone Olive Ridley sea turtle remaining in the island. Our boatman took it from its holding tank and told us that we could lift and hold it up high for picture taking, but noticing that it was stressing the poor creature, we just refrained. This turtle had been hatched and raised on the island. We also saw a small group of baby turtles in another holding tank; our boatman said that some turtles would still wade ashore to lay their eggs on the island. 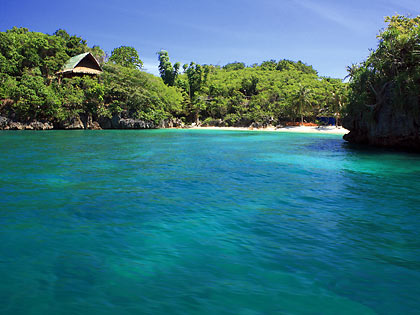 One of the small beaches at Baras Beach Resort.

A short boat ride away is Baras Beach Resort which is tucked away in a sheltered inlet and includes a small cave that can be explored by boat in calm waters. By this time however, moderately strong waves have made it dangerous to try to enter the cave. We simply sailed by Baras Beach Resort, observing the native-style resort cottages on the beaches and on the surrounding cliffs. The white sand beaches lining Baras are a bit narrower and smaller compared to other islands nearby so we decided to skip beach bumming here and head off instead to our next destination.

The narrow entrance to Natago Beach at high tide; at low tide the sand bar (seen submerged here) will block boats from entering.

Our next stop was Natago Beach, another white sand wonder on this group of islands. On the way there our boat had to pass through a narrow opening between two rocky islets. A beautiful white sand bar ran right across that opening and we feared the boat would ran aground but the sand bar was actually submerged – the water was just so crystal-clear it gave the impression the sand bar was high and dry. We understood why the staff at Raymen's advised us that it was better to do island-hopping in the morning, during high tide. At low tide the sand bar at this opening would have been fully exposed, blocking any boat from passing through. (High tide would have made a great photo opportunity though.) Natago Beach is located just to the right of this opening.

A closer look at the submerged sand bar at the entrance to Natago Beach.

Unfortunately non-guests of the resort are not allowed to land on Natago Beach anymore. The boatmen informed us that the new owners – a foreigner and his Filipina wife – do not allow it. Hmmm… from what we know beaches are supposed to be public areas and while resorts might be off-limits to the public, the beaches themselves are not. We ended up just sailing right by Natago Beach and observing it from our boat before moving on to our next destination: Isla Naburot. 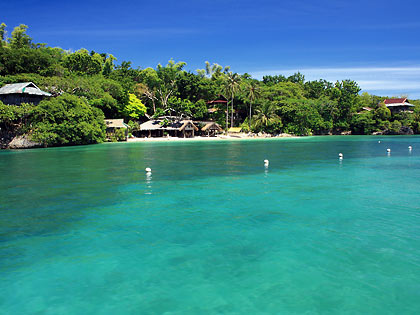 We've watched Isla Naburot get featured on travel programs before. It has eight native-style cottages perched on cliffs and on a lovely white sand beach. The surrounding turquoise waters contain rich marine life, making it ideal for swimming, snorkeling and scuba diving. Originally designed to function without electricity, it is now solar-powered. Owned and operated as an island hideaway by the Saldana family it is not surprising that Isla Naburot is pricier than the typical Guimaras resort. And as with Natago Beach we could only pass by, admire and take pictures of this resort. 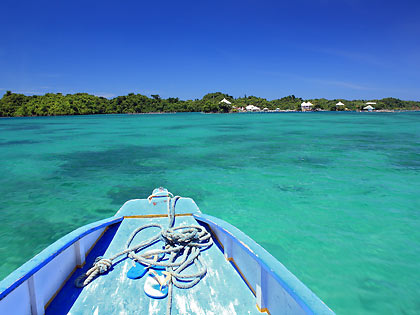 We almost never got to SEAFDEC's Igang Marine Station, the last stop of our island-hopping tour. After all, who would want to go to a marine research center on an island-hopping trip unless you're really into aquaculture? Furthermore this station is way south of Alubihod Beach while the rest of our destinations were to the north of that location. Some bloggers suggested by-passing this place if we have only a limited amount of time. But with our time clock running well below the 3 hours we have set for this trip we decided to give it a go. It turned out to be our tour's most interesting stop. 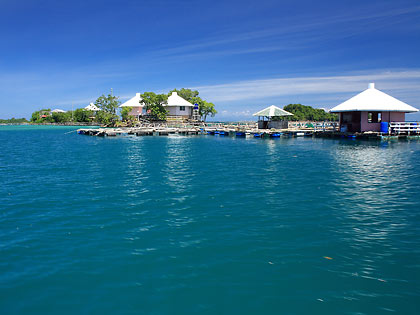 Our approach to Igang Marine Station was a foretaste of things to come. On the way to the station, we passed a few rock islets in the middle of a crystal-clear turquoise sea (see top picture) with clumps of coral clearly visible in the water below. It was hard to imagine that this same area was the site of a disastrous oil spill only eight years ago. This SEAFDEC (Southeast Asian Fisheries Development Center) station is composed of four islets housing research facilities and clusters of fish cages interconnected by pontoon or floating foot bridges. 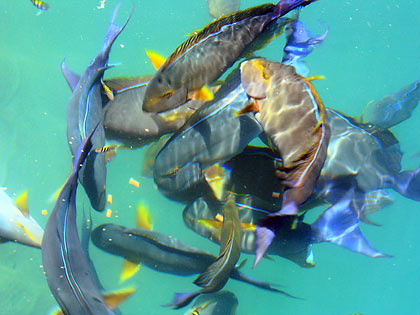 Surgeon Fish in a frenzy as our guide feeds them.

The most interesting feature of the station is what's inside the fish cages. After paying the P25 entrance fee per person we were given a guide who toured us around the cages. The latter contained grouper (local name: lapu-lapu), sea bass (apahap), surgeon fish (labahita), pompano, red snapper (pulang maya-maya), milkfish (bangus) and abalone. Many of the fishes are HUGE – we saw several bulky groupers that were 2 meters or so in length. The sea bass here reached lengths we've never seen before and the milkfish (the salt water version) are also much larger than the ones we are used to seeing in markets back home. And the pompanos! They zipped to and fro so quickly Leo had an impossible time trying to get a good shot of the hyperactive fishes. 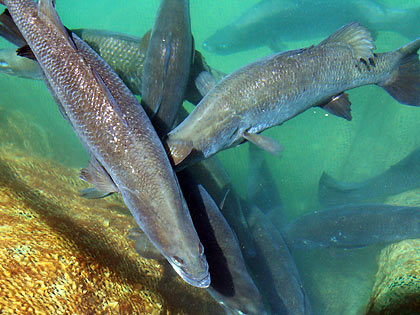 Our helpful and enthusiastic guide made our visit more interesting as he shared a few anecdotal experiences with the fishes at the station. He actually had names for some of the more notable inhabitants of the cages: for instance he kept calling "Mike!" to a huge grouper whenever he would throw the fish some feed. He also had a ready answer to our curious questions. We had noticed that several colorful reef fishes including butterfly fish, lion fish, Moorish Idols and even a few poisonous puffer fish were mixed in with the much larger residents of the pen. Our guide explained that these types of fish are not usually allowed inside the cages but some were able to sneak in when they were much younger and smaller. Once inside they shared in the feed with their larger co-habitants, grew and stayed there permanently. 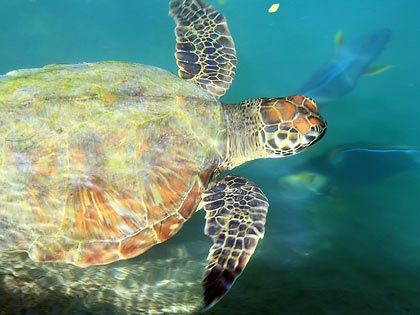 Sebastian, the green sea turtle, practicing his strokes inside a fish cage.

To our pleasant surprise there was a green sea turtle sharing a pen with the surgeon fish. Sebastian was named after the fisherman who caught him (probably got him snared by accident in his fishing net) and was brought here by the SEAFDEC people to recover. He will be released in a few months back into the wild. It was a delight to see Sebastian gliding gracefully around the pen and to realize that he will soon be free to roam the open seas once more not too long from now.

Alubihod Beach is the most popular jump-off point for touring the islands in southwestern Guimaras. The resort where we stayed - Raymen's Resort – offers island tours. However, you do not have to stay at Raymen's or in any of the resorts at this beach; you can simply pay the entrance fee of P10 and book a trip either inside the resort or at a kiosk on the beach. The prices are the same: P500 for the first hour and P150 for each succeeding hour for a boat that can normally take 6 -7 guests. This arrangement was a small surprise for us since almost all island-hopping arrangements in other places have a fixed package rate for one whole day even if you consume only a fraction of the day.

The boats are ready to go as early as 6AM. You can arrange your itinerary with the boatmen but we recommend a minimum of three hours to visit all or most of the islands mentioned here. Remember to bring along food and drinks (and some bread for the fish at Ave Maria Islet and Turtle Island) since your destinations will not offer any. The staff at Raymen advised us to make the tour in the morning to enable the boat to cross the sandbar at Natago Beach at high tide. However, the sandy beach at Ave Maria Islet looks best during low tide which occurs usually later in the day. Just find a balance between these two options. You may also rent snorkels at P100 each from Raymen's.