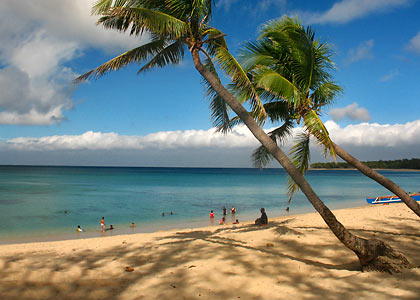 Unlike continental countries such as the United States and Canada, the Philippines does not readily lend itself to long, extended road trips due to its archipelagic topography. A noteworthy exception is the drive to the northern tip of the island of Luzon along the coastal towns of the Ilocos Region. Always a favorite of ours, the Ilocos road trip takes you through stunning scenery of the region's coastline past tranquil coves, sleepy towns, old Spanish-era churches and green farm fields.

The good condition of the roads in the region also makes for an enjoyable journey. We've made this trip at least four times now with the first two happening during the time when we lived in Baguio City and we enjoyed every single one. Just like the typical Ilocano's penchant for thrift, this was one trip that we shoestring travelers could well afford even if we had to go by private vehicle.

There isn't any lack of interesting stops along the way beginning from La Union, the first Ilocos province on the trip. Bauang has long been popular for its long stretch of sandy beaches and resorts but since we've been there a few times before, we've always moved on to other less well-known spots. We were attracted to San Juan during our earlier trips primarily because of its less-crowded beaches and strong surf but it is now steadily becoming popular with local and international surfers. Poro Point in San Fernando City has a white sand beach and now boasts a Mediterranean-style resort inspired by the architecture of the Santorini Islands in Greece. Well, not exactly an ideal accommodation for shoestring travelers, but still a remarkable place all things considered. 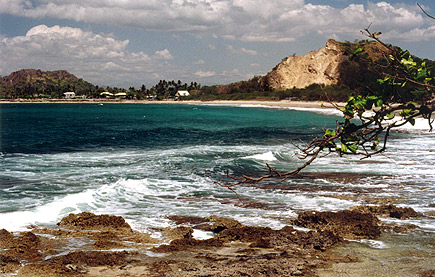 As we drive into Ilocos Sur we discover plenty of interesting churches along the way at Tagudin, Sta. Lucia and Candon. Santiago Cove (also known as Sabangon Cove) is a stretch of crescent-shaped golden sand beach located just beyond the town of Candon. After Santiago is Sta. Maria with its UNESCO World Heritage church of Nuestra Senora de la Asuncion, Pinsal Falls and Suso Beach located just along the national highway. Once we couldn't resist going down to the beach to take a look at the fishes trapped in the coral pools at low tide. Continuing further north past the town of Sta. Maria takes us to the rocky and ruggedly beautiful shores of Sulvec in Narvacan. This is a favorite stop for locals and commuters alike and you can see many locals taking a dip or washing their clothes on the beach below the elevated road. 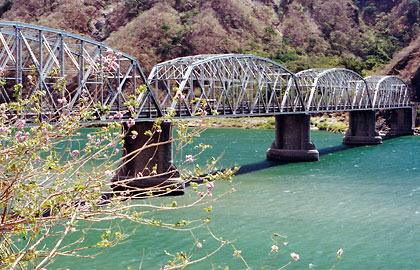 The Quirino Bridge over the Abra River, Ilocos Sur (2000 photo)

We rarely take pictures of bridges that we encounter on trips but the Quirino Bridge spanning the Abra River and connecting the towns of Santa and Bantay is one scenic spot we simply could not resist. It's not the bridge structure itself which is just an ordinary, World War 2-era steel truss bridge, but the setting that captivates passers-by. Framed by the hills of Santa, the bridge crosses over the jade-green expanse of the Abra River which empties into the China Sea not too far away. We were fortunate to have taken pictures of the bridge in 2000. A year later strong waves generated by a typhoon washed away one of the bridge's middle spans. The replacement span was markedly different from the old steel truss section that was washed away and we felt this detracted from the beauty of the whole scenery. 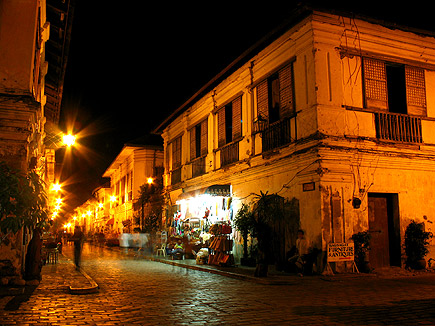 After Bantay town (where the famous Bantay Church Bell Tower is located) we detoured from the national highway to get to the center of Vigan, the capital of Ilocos Sur and a UNESCO World Heritage site known for its Spanish-era colonial houses and cobblestone streets. Vigan is the best-preserved example of a Spanish colonial town and fuses elements of European architecture with Asian design elements. Most of the colonial homes are located along Calle Crisologo, otherwise known as the Mestizo district. The more than one hundred houses of the Mestizo district are typically two-story structures where the first floor was made of stone or brick and the upper floor of wood. Calle Crisologo and its surrounding streets are made of cobblestone and are off-limits to modern vehicles. Instead, horse-drawn kalesas offer rides along the cobblestone streets. Nearby is Plaza Burgos with the Vigan Cathedral and the Vigan Empanadahan, a location on the eastern part of the plaza that sells the delectable Vigan empanada. Naturally we had to sample the dish every time we visited Vigan. 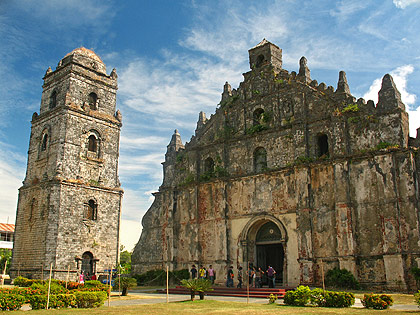 The next best stop on the Ilocos Road Trip after Vigan is the town of Paoay in Ilocos Norte, famous for its lake and the huge resthouse of the Marcos family along its shores (also known as the Malacañang of the North). But Paoay's tourism showcase continues to be the San Agustin Church (sometimes known as the Paoay Church), another UNESCO World Heritage Site. The San Agustin Church's architecture is a combination of Baroque and earthquake-resistant styles resulting in a unique form known as Earthquake Baroque. Twenty four massive buttresses on the sides of the church reveal the efforts given to reinforcing this church against strong earthquakes so common to the region. 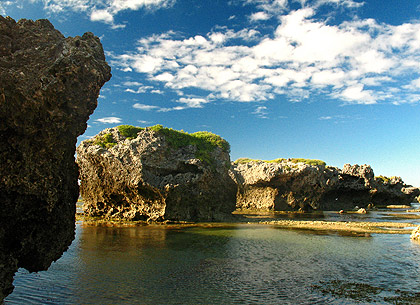 The coral rocks and tide pools of Pangil in Currimao, Ilocos Norte

On our third Ilocos road trip, a friend of ours who hails from Paoay invited us to stay at their place – another piece of shoestring traveler fortune. We not only ended up with very good accommodations for the night but also got to fill ourselves with generous amounts of the famous bagnet (deep fried pork, Ilocano style), courtesy of our gracious friend and his mom. The next day he took us to see the coral gardens of Pangil in Currimao. Studded with large coral formations, this two-kilometer stretch of beach was a pleasant surprise since we've never heard about it until our friend took us there. We spent a whole afternoon picnicking in the shade of the huge coral rocks and playing with fish trapped in the numerous pools formed by the low tide. 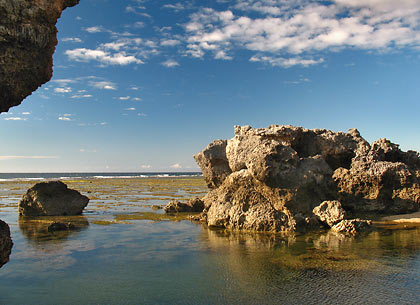 Laoag, the Ilocos Norte capital is another interesting stop along the way. We usually stop to eat at this city and on two occasions spent the night there at some relatively cheap but very clean inn. We took some time to roam around the city center, dropping by the provincial capitol and observing the Sinking Bell Tower. (No exaggerations here. The entrance door of the tower had sunk so much that people had to duck to be able to enter.) Attractions in and around the city include the La Paz Sand Dunes (also known as the "Desert of the North") and Fort Ilocandia, the only five-star resort in Northern Luzon.

The final leg of our road trip took us to the towns along Bangui Bay, at the northwestern tip of Luzon. The national highway past the town of Pasuquin winds along the rocky, windswept coast off the China Sea, a picture of rugged beauty that gradually transforms into the sandy shores of Bangui Bay. At Pasuquin, we once stopped by the bakery famous for biscocho, a kind of rolled bread made with anise. We waited for a few minutes for the next batch of freshly baked biscochos and were rewarded with our snack for the day. 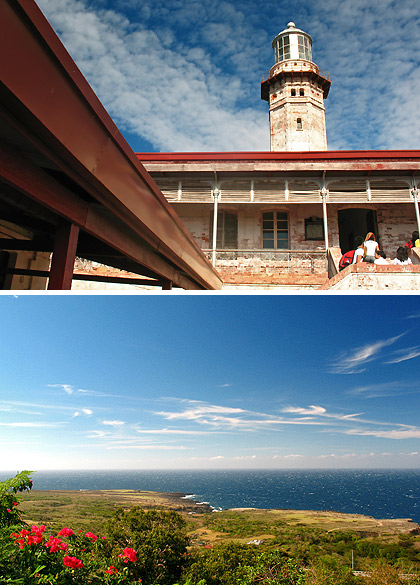 Cape Bojeador Lighthouse (top) and a view of the rugged coast from the lighthouse (bottom).

Burgos, the next town after Pasuquin, is the site of the Cape Bojeador Lighthouse. Located 35 kilometers north of Laoag, this lighthouse was built in 1892 and still functions to this day as a beacon for ships entering Philippines waters. A paved road took us up to the top of the Vigia de Nagparitan Hill where the lighthouse is located. Even from the parking lot one get easily get panoramic views of the rugged Ilocos coast with its array of huge, windswept rocks pounded by the strong surf of the China Sea. Incidentally, this is the northwesternmost point of Luzon, an ideal place for a lighthouse. From the parking lot we climbed a flight of stairs to get to the courtyard where the service buildings and tower are located. It is possible to get all the way to the top of the lantern room, although only a certain number of people are allowed at the tower at any one time. It is best to go to Cape Bojeador Lighthouse on a weekday as the place can really get crowded on weekends and you have to wait in a long line for a chance to go up the tower. 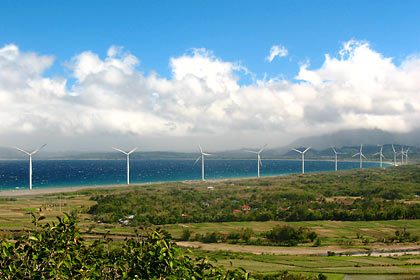 Windmills along the coast of Bangui, Ilocos Norte.

Continuing north along the national highway takes us to the town of Bangui. The Bangui View Deck along the road is impossible to miss and offers yet another panoramic view, this time of Bangui Bay and its coastal towns. On our last road trip in 2008, we saw for the first time the row of windmills on the shores of the bay. Known officially as the NorthWind Bangui Bay Project, the windmills are said to furnish about 40% of the power needs of Ilocos Norte (it's encouraging to note a greater trend towards renewable energy sources). It's possible to get up close to the windmills by taking a dirt road that leads to the bay but we did not have the time to do so on this particular trip. 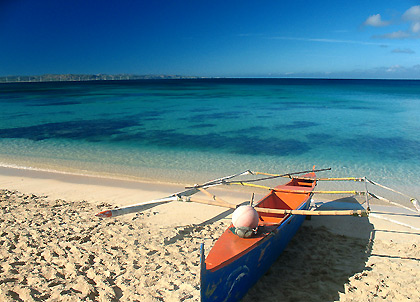 At the Edge of Luzon

The town of Pagudpud is the northernmost of the Ilocos Norte municipalities and boasts of clean white-sand beaches and emerald green waters. There are actually three white-sand beaches in Pagudpud: Saud, Maira-ira and Pansian. Saud Beach has long been a popular spot but Maira-ira, also known as Blue Lagoon, is more pristine and is fast becoming popular despite not being as accessible as Saud Beach. With these three beaches Pagudpud can lay claim to having the best beaches in Northern Luzon. 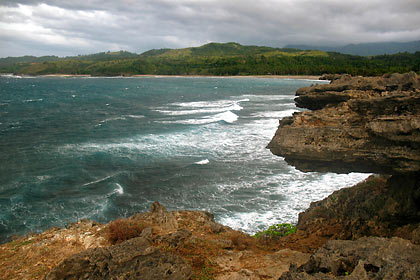 While we've visited Saud Beach twice now, we haven't really taken a dip in its waters, preferring to just picnic and enjoy the scenery of the place. We have yet to visit Maira-ira although it's possible that we have seen it from a distance, from the tall cliffs of Hidden Treasure Resort in Barangay Caparispisan also in Pagudpud. This resort is another ideal getaway for the shoestring traveler as it offers economical accommodations in a secluded and untouched area by the sea. The resort is situated near the top of a cliff with excellent views of the rugged coastline of this part of Pagudpud. (See more about Pagudpud here.) 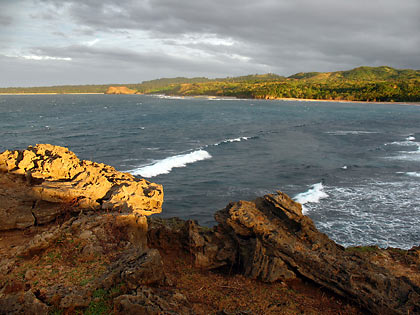 View of the coast from atop a cliff on Hidden Treasure Resort at sunset, Pagudpud, Ilocos Norte.

Our last destination on our third Ilocos Road Trip is the Patapat Viaduct, an elevated and winding coastal highway constructed along the foot of the mountains of the Cordillera range in the northernmost part of Ilocos Norte. Patapat is close to the boundary of Cagayan province. We actually drove across the provincial boundary into Cagayan but as it was getting dark we had to turn back for the drive to Paoay. We had a spectacular view of the setting sun on Pasaleng Bay as we drove across the Patapat viaduct.

Although we've done the Ilocos Road trip four times now (twice from Baguio City and twice from Metro Manila), we'll probably do another one or two in the near future. There are a few more places we have yet to visit: the coastal rock formations in Kapurpurawan, Burgos, the Tanap-Avis and Ka-Angrian waterfalls in the same town and Maira-ira of course. And the ones we've visited before are always worth a second, third or fourth look. Such is the immaculate beauty of this region.