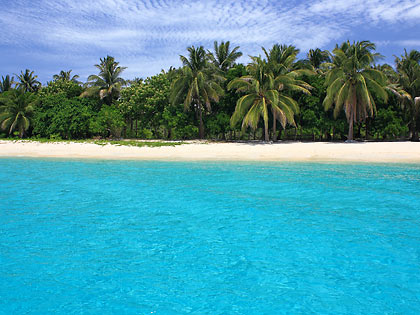 We have just finished our tour of the two Subic Beaches in Calintaan Island off the port town of Matnog and were on our way to our last destination for the day. The stronger-than-usual waves of the San Bernardino Strait had kept us from leaving Calintaan Island earlier. But with lunchtime rapidly approaching we decided to go ahead – with approval from our boat crew – and head towards Tikling Island. The waves were still in a playful mood but our outrigger easily covered the distance in less than 30 minutes. Soon we were descending unto Tikling's pinkish-white sand beach while its lush green vegetation swayed gently in the soft wind. 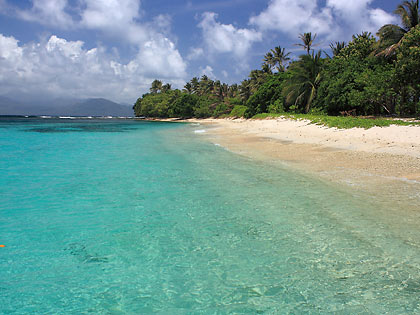 Tikling is a privately-owned island although day tours are allowed. No cottages or huts for rent here and definitely no resort. Surprisingly there are no entrance fees either although we did leave a tip with the caretaker. The only hut in the island houses the caretaker and his family. We cannot even remember seeing tables or benches; we had simply left our things back at the boat. Instead we were rewarded with views of the island's still-pristine state: the crystal-clear aquamarine waters, coconut and other tropical trees in thick clusters beyond the beach and the sandy beach… 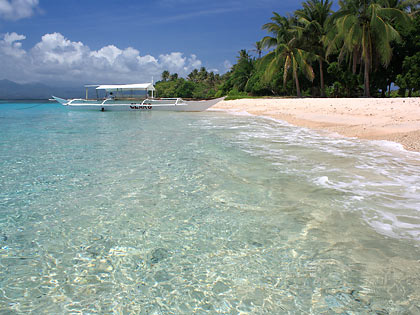 Our rented outrigger boat resting on a beach at Tikling Island.

Just like nearby Subic Beach on Calintaan Island, Tikling's beach boasts of creamy white sand peppered with crushed red coral particles, giving a pinkish color when viewed from a distance. Of all the places we've visited before only the sand of Caramoan's Cotivas Island comes close to this color (other Philippine beaches with pinkish hue sand are Apo Reef in Mindoro and most notably Santa Cruz Island in Zamboanga). 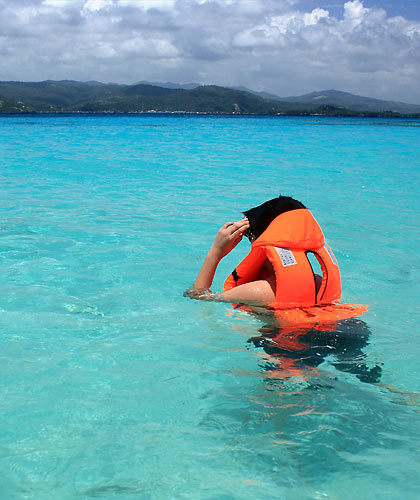 Raffy trying out the warm waters.

After briefly exploring the beach front we were soon frolicking in Tickling's very clear azure waters, probably one of the clearest waters we've ever encountered in the country. We did discover, however, that the beach drops off pretty sharply from shore, making it a bit unfriendly for children and non-swimmers. We had wanted to snorkel too and asked one of the boatmen to assist us as we swam off in search of a good snorkeling spot not too far from shore. There seemed to be a nice area of coral rocks not too far from where our boat had docked but the strong waves soon made it clear that snorkeling was not to be an activity on Tikling Island for this day. The beautiful sights around this island, however, would more than make up for the disappointment of not being able to explore its underwater treasures. 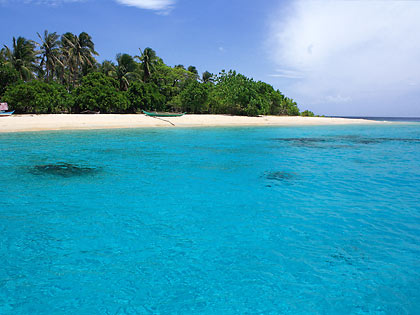 Tikling's beautiful scenery more than made up for the disappointment of not being able to snorkel here.

The beach and waters are not the only attractions to be found on this island. At the opposite end of the main beach and facing the island mass of Samar are rock formations along the shore. This may be reached via a short walk inland through the lush green vegetation. As is the case when we were trying to cover many destinations in one trip, we had to forego this attraction to be able to make it back to the port of Matnog and to catch the jeepney for Irosin.

"Tamed" wild boars at the backyard of Tikling Island's caretaker.

An unexpected attraction was the presence of several wild boars on the island, although "wild" might probably not be an appropriate way to describe them. We learned from the caretakers that someone gave them a few of the wild animals some time ago (probably taken from Palawan) and they ended up domesticating and multiplying them. The male boars we saw did not have the distinctive tusks we usually associate with wild boars; most of the males here are quite young and have yet to grow their tusks. 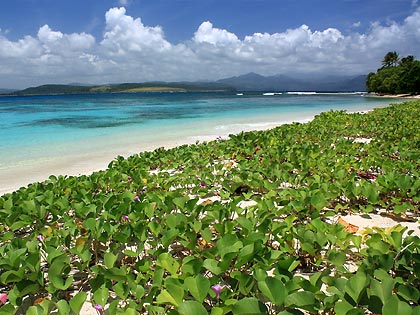 A carpet of green over a small portion of Tikling's pink sand beach.

Unlike Subic Beach, Tikling Island has no accommodations. It may be possible to pitch a tent here to spend the night but you need to ask permission from the caretakers first. There is a tree house on the island but we were not able to ask of it was possible to rent it. However, since it is just 20-30 minutes away from Matnog by boat it is better to get your accommodations at that town or to arrange an overnight stay at one of the hut or cottages at Subic Beach and then drop by Tikling Island on the way back to Matnog town proper. 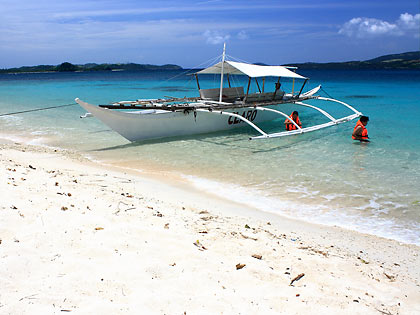 For tips on how to get to Matnog and Tikling Island, click here.

For accommodations at Matnog, go here.

Visit our Flickr page for more pictures on Tikling Beach.