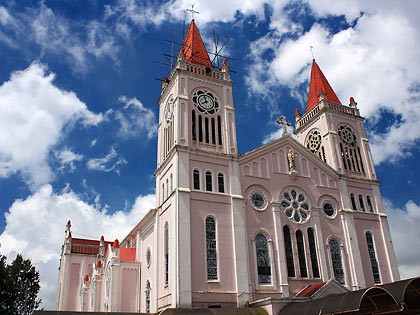 In our younger years Baguio City was the prime tourist destination for us with its pine forests and colorful flowers, charming green and white wooden structures, cool mountain air and relaxed pace. However, despite the disastrous 1990 earthquake, Baguio's urban development has speeded up in later years and when we lived and worked there briefly from 1998 to 2004 it was not the laid back mountain retreat we had known it to be. Go to Sagada was the advice we would hear from people who miss the Baguio of old (and visit Sagada we ultimately did). Our recent visit to Baguio revealed more signs of continuing urban development but like a homecoming of sorts its old charm somehow still rubbed off on us. Only this time we realized that our former abode has several new attractions to offer to its guests.

Getting to Baguio these days is a lot more convenient with the completion of the Tarlac-Pangasinan Expressway (TPLEX) and the Subic-Clark-Tarlac Expressway (SCTEX) which enables the motorist to go all the way to Rosales in Pangasinan without having to pass the congested cities of both provinces. This time though we took Victory Liner's deluxe bus which passes through both expressways and the North Luzon Expressway.

Still some green around: pine trees at Camp John Hay.

Traveling up Marcos Highway we noticed it has a new name: Ben Palispis Highway. While we were wondering who Mr. Palispis is, we observed some new attractions right along the highway: Dinosaurs Island, The Holy Land and the Tuba Science Museum. We were riding a bus so we couldn't stop and give Dinosaurs Island a serious look but found out later that all three attractions have only recently opened. It also turned out Mr. Palispis is a former Benguet governor who was instrumental in helping Benguet State University attain its university status.

After dropping off our things and resting briefly at the hotel where we would be billeted for the next two nights, we were off with Nina's aunt and uncle to take the obligatory walk through Session Road and see the pink, red and white Baguio Cathedral on Mount Mary Hill along the way (see top photo). While many old establishments including some mid-20th century Art Deco buildings have remained at Session, there are several more new buildings that have risen up along the most famous road in the city. We also observed that several iconic establishments such as the Star Café were now closed. Likewise, an old favorite – the Euro Swiss Deli (Leo used to crave after their potato salad and sausages) – is now gone. After a few moments of sadly reflecting on the fates of once-proud landmarks here we hailed a taxi to a new attraction: the BenCab Museum. 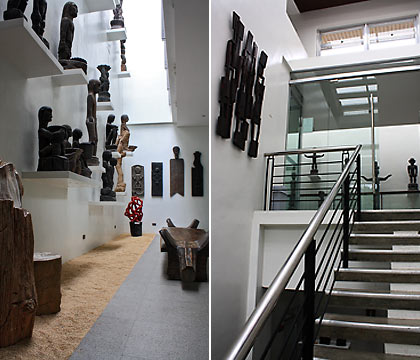 Inside the BenCab Museum: the museum architecture is likewise fascinating.

The BenCab Museum is the four-story home of Philippine National Artist Ben Cabrera's art collection. This museum, located at Km. 6, Asin Road is actually a part of Tuba, Benguet but is just outside Baguio's city limits. There were extensive road repairs going on when we visited but fortunately traffic was not as bad as we had feared. 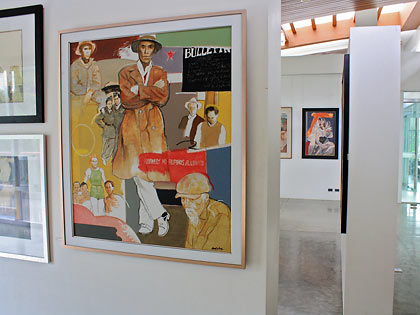 A collection of the Ben Cabrera's personal works; many of BenCab's paintings are social commentaries.

Benedicto "Ben" Cabrera was awarded National Artist of the Philippines for Visual Arts (Painting) in 2006. His museum also includes paintings and sculptures by other Filipino artists, a Contemporary Arts Gallery, a bulol collection of wooden native figurines (rice granary gods) and the Cordillera Gallery. The latter is Ben Cabrera's collection of tribal artifacts and indigenous crafts of the northern Philippine highlands – functional carved objects like furniture, eating utensils, bowls, and other implements like baskets, as well as the weapons of the numerous tribes once known for their headhunting practices. 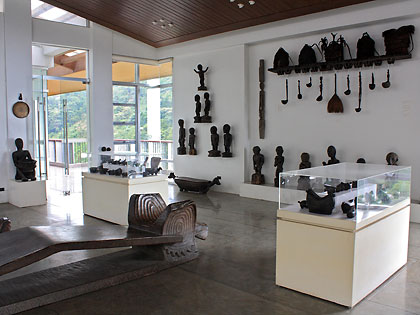 The Cordillera Gallery features tribal artifacts and indigenous crafts of the northern Philippines.

At the lower level of the museum is Café Sabel named after BenCab's famous muse in his paintings and where guests can try their salads and the spicy tuyo pasta with basil and chili. Café Sabel also offers a beautiful view of the landscaped garden and farm that BenCab laid out. The garden has a pond and a walkway leading to a hut on one end of the pond. Below the garden is an organic farm with a stream and waterfall running through. We've heard that BenCab had to buy the adjacent forested hillside lot just to preserve the natural look of his farm and garden.

The garden and pond at the BenCab Museum.

We had wanted to snack at Café Sabel but decided instead to return to town and visit another old favorite: Café by the Ruins at Chuntug Street. We've enjoyed our cinnamon bread breakfast at this place years ago but were delighted that they have added a lot of new fare since including Ernie's Kamote: bread fortified with sweet potato and served with kesong puti or cottage cheese made from carabao's milk.

Coffee and snack time at Café by the Ruins.

We've always assumed that the ruined wall – over which the newer structure was built – was the remains of a building destroyed by the 1990 earthquake. Our curious research later revealed that the ruins were really those of the pre-war residence of the American governor of Benguet which was destroyed during World War II by air or artillery bombardment during the battle for the city. Except for the remains of a wall you won't see much evidence of the old structure.

Dinner was at another old favorite: Forest House on Loakan Road and near our old home at Greenwater. As we dined with Tiyo Rene and Tiya Tess, it reminded us about our dinner dates more than ten years ago. Looking around we thought the place had not changed much – only the menu probably did. The old ambiance was still wonderfully there.

We've always enjoyed Camp John Hay even during the '80s when it was still a hill station for American forces based in Subic and Clark. Today the lush forests of pine trees, green-lawned golf courses and old white and green timber houses continue to evoke a sense of nostalgia and natural charm amidst the recent influx of hotels, restaurants and shopping places. It was here that we chose to go on the second day of our stay, choosing to skip Mines View Park in the process, which even during our stay in Baguio at the turn of the Millennium had already turned into an over-commercialized tourist stop. 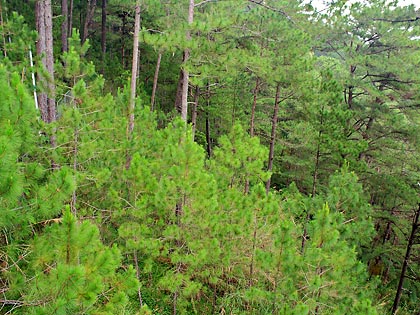 But Camp John Hay's most exciting new development is the Tree Top Adventure set amidst unspoiled scenery near the Bell House. Leo had done something similar in Subic six years ago and later discovered that it was the same company managing this facility. A big difference from Subic is the view of the well-preserved pine woods in this area. Most of the rides here are meant for thrill seeking dudes with such names as Superman (a 200 meter long, 150 feet high zip line), Tree Drop (a 60-foot, head-first, free fall in 2 seconds) and Silver Surfer (a 70-meter long diagonal zip line ride for two people that takes the riders up and down at 6 meters per second). 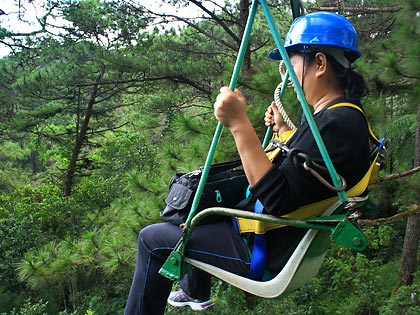 With our uncle and aunt in tow and with our knees and backs dangerously approaching senior status, we opted for the more mundane Canopy Ride, Funicular and Skywalk combination. This was an almost one hour-long affair where we were taken anywhere from 20 to 100 feet above the pine forest floor, taking stops at 8 stations along the way and traveling on a suspended cable chair and, on the last stage, a 4-person carriage. There is also a stretch where we got to walk for a few hundred meters on a metal platform to be treated to amazing views of Baguio's highlands and wooded areas. Every now and then our tree top adventure was punctuated in the background by blood-curdling screams from more adventurous folks doing the Silver Surfer at another station. Our advice on these rides: if you want to conquer your fear of heights take the Superman, Tree Drop or Silver Surfer rides but if you just want to relax and enjoy the view then take the Canopy Ride, Funicular and Skywalk. 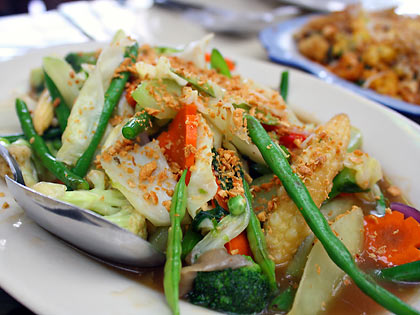 Baguio has always been known for its fresh veges. This is a Thai-Pinoy dish at Happy Tummy, the Ketchup Food Community.

It was almost lunch by the time we were through with the Tree Top Adventure and after a brief ride through South Drive where we used to walk to our old office more than 10 years ago, we ended up at a small compound with the curious name of the Ketchup Food Community. Located at Romulo Drive in front of Wright Park this place houses 5 dining establishments with such names as Happy Tummy, Canto, Rancho Norte, Green Pepper and Rumah Sate. Most of these places feature affordable dishes.

After taking a quick look around we settled for Happy Tummy which serves Thai and Thai-Pinoy fusion dishes (or is it Thai dishes adapted to Filipino taste?). The ambiance of outdoor dining and rustic architecture combined with heaping plates of fresh food made it a hearty but relaxing meal at another new discovery at a place we use to call home.

We were still resting at Happy Tummy minutes after finishing our lunch when it started to drizzle outside. We would soon spend the rest of the day curling up and enjoying the cool weather inside our cozy hotel room – another reminder of how life used to be like this more than ten years ago when we called Baguio home.