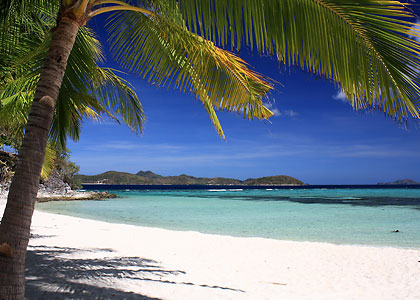 Our boat slowly glided into the beige sand beach, past clear waters through which corals of different sizes, shapes and hues could clearly be seen. We were baking in the early afternoon heat as we disembarked and slowly made our way past the beach into a clearing and then over a small hill. Within a few minutes we were soon greeted by a long line of coconut palms just behind a long stretch of powdery white sand beach – the best we have seen so far in the whole of Coron, Palawan. 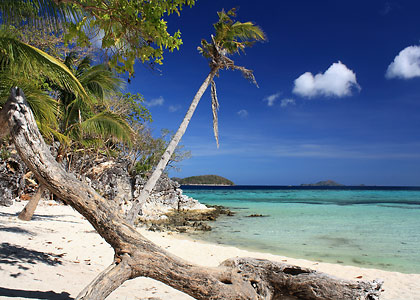 Malcapuya's relatively pristine state: we are wishing this will be preserved but with tourism development in high gear these days we can only hope this is done responsibly.

Malcapuya Island was the third and last stop of our second day of island-hopping in Coron. It is part of the cluster of three islands on that tour package that included Bulog Dos in Bulalacao Island and Banana or Dicalabuan Island. Although still part of Coron, it is located about 30 kilometers south of Coron town and actually lies closer to Culion Island in the east. Because of its distance from Coron, it has remained relatively underdeveloped like Banana and Bulalacao Islands. Times are changing though. These islands are becoming more popular (we were part of a group of 5 boatloads of tourists – around 70 or more people – who visited all 3 islands on this day). The upscale Two Seasons resort has already opened last year at Malaroyroy Peninsula in Bulalacao and there are rumors that Malcapuya – itself privately owned – will follow suite. 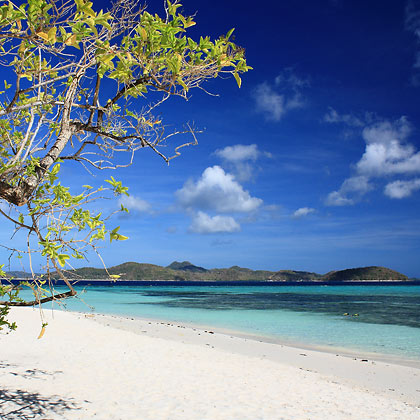 Malcapuya is actually privately owned but is open to the public.

It was around 2PM – the hottest part of the day in summer – when we left Banana Island for Malcapuya. Our boat docked at the island's western beach from where we made our way across a narrow inland portion of the island to arrive at the southern beach – the white sand beach that is arguably the most beautiful in this part of Coron. We were told by our boatmen that the island's owner only allows boats to dock on the western beach, ostensibly to preserve the beauty of the southern beach. The island has a nice but shorter stretch of white sand beach on its northern shores but that was too far for a casual walk from the southern beach. 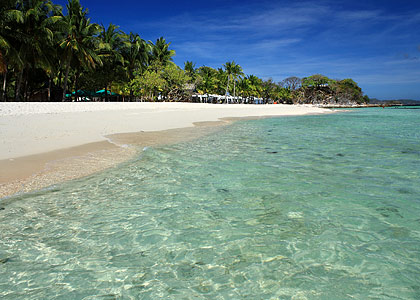 The southern beach consists of a long stretch of fine, white sand with a long line of coconut palms that provide a good shade. A few native huts and white canvas party tents underneath the coconut palms provide more shade and a place to store one's personal effects. There is a hill on the eastern end of the beach that provides a panoramic view of the whole southern beach, a portion of the island's eastern shores and distant views of Banana Island and Bulog Dos/Malaroyroy Peninsula as well. The views from this hill reveal the rich growth of corals surrounding the island.

Malcapuya's eastern shores viewed from atop a hill at the edge of the southern beach. Notice the corals showing clearly through the aquamarine waters.

View of the waters in front of the southern beach from the same hill.

The picture-perfect southern beach has shallow waters of varying shades of aquamarine, turquoise and emerald. This beach is perfect for swimming, although a growth of sea grass several meters from the shore might deter swimmers looking for a nice, perfectly clean beach

Beyond the sea grass and not 100 meters from the shore is an extensive bed of corals containing a wide variety of colorful marine life including giant clams and a few species of clownfish. It's an area perfect for snorkeling and we did not hesitate to take advantage. And fortunately so because it turned out to be the first time we were to see clownfish and giant clams in the wild (we had seen giant clams before but they were all in marine sanctuaries). There is a sudden drop of the sea floor beyond the corals as evidenced by the deep blue color of the water in the pictures above. From previous experience, we've learned that this is an area where one can find a huge quantity of fishes but we didn't reach that far even while being assisted by the experienced and very helpful crew from our boat.

A beach this beautiful deserves a long walk from end to end but this day was blisteringly hot and as a result we couldn't go very far from the area of the party tents. We all put on plenty of sun tan lotion for this trip (twice during the day actually) but still ended up being sunburned. Such was the heat on this particular day. A pity since the western portion of the beach contains tall karst or limestone rock formations that would have made for excellent photo opportunities. 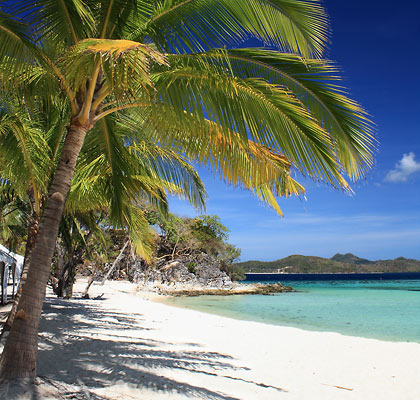 Despite a particularly hot day, Malcapuya provided plenty of shade underneath the party tents and coconut palms.

Resting under the coconut palms after our snorkeling adventure, we treated ourselves to refreshing coconut juice and meat being sold by the island's caretakers. It was then that we noticed a villa located inland and found out that it was for rent should one wish to stay overnight in the island. We were headed back to Coron town on this particular day however and it wasn't long before we were soon sailing back to that town before the sun set. 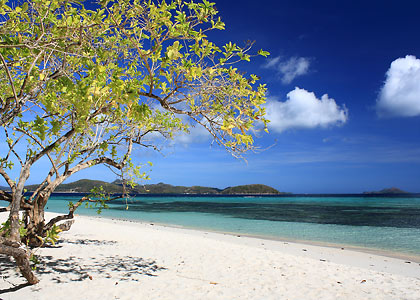 Those who want to visit Malcapuya usually go on a tour package that includes the 2 other islands of the cluster, namely Bulog Dos and Banana Islands. Alternatively, one can charter a boat to get there. You can keep the cost down if there are 10-15 people in your group (the normal complement of boats traversing this route), otherwise it will be a bit more expensive. The advantage of chartering your own boat is you get to choose the islands you want to visit.

Click here to find out how to get to Malcapuya Island and the other islands in the cluster.