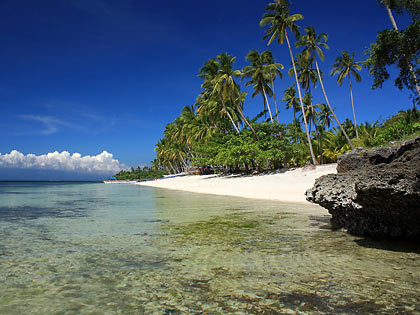 Just off the national highway going to San Juan town we skirted towards a narrow road and headed for the coast. After a few minutes Dondon parked his trike and told us that the way to the beach was a path that seemed to go through someone's private property. No one was charging us anything (it reminded us of a sign we saw in Siquijor that read "private property but you may pass through") so we went ahead and descended unto a pretty white sand beach with crystal-clear waters.

Dondon mentioned that the view is even better if we rounded the mass of coral rocks on the right side of the beach and sure enough – after we rounded that bend – we saw an even prettier sight with the same white sand and glassy waters but lined by a long stretch of coconut palms. This is Paliton Beach, one of the most stunning beaches in the island. 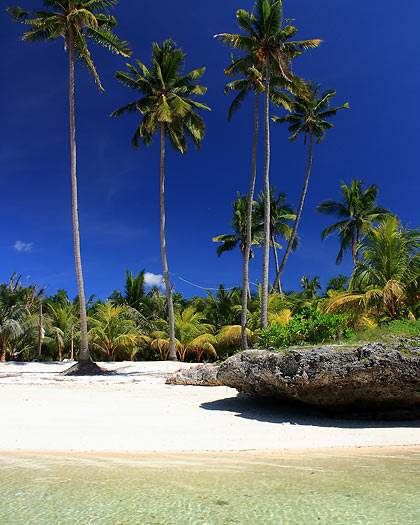 No doubt one of the most beautiful beaches in Siquijor: Paliton Beach.

Our second day of touring brought us to the western side of the island – to the towns of Siquijor and San Juan. Siquijor town is the provincial capital and offers the visitor a cluster of several white sand beaches easily accessible from the national highway, beaches with names like Candanay Sur, Candanay Norte, Dumanhog and the Poblacion Siquijor Beach. There is a small concentration of resorts along these beaches similar to what we saw in Sandugan Beach in Larena. After consulting with Dondon we decided to skip the Candanay beaches and head instead to Dumanhog Beach. 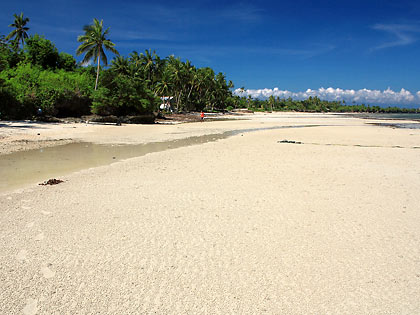 Just like many of the beach destinations in Siquijor we had to pass through private property to get to Dumanhog but were not being charged for the access. We've seen a picture of Dumanhog Beach before with its white sand and turquoise waters but only saw white sand when we got there. Quite disappointing to say the least but we realized that we had arrived on a morning – at low tide – and consequently the water had retreated scores of meters away from the shore. We spent only a few minutes here and soon we were on our way. 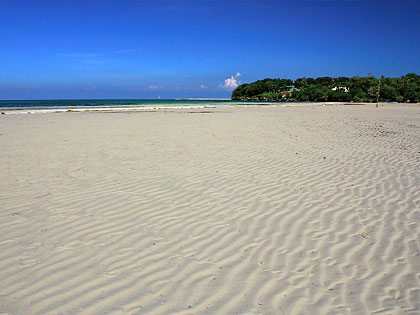 The poblacion Siquijor beach beside the Jetty at Siquijor port.

Next destination for us was the port near Siquijor's town center where we booked our ferry ride back to Dumaguete City for the following morning. Beside the jetty is a white sand beach fully exposed at low tide. We've seen pictures of this beach before at high tide, just like Dumanhog, and it was a sight to behold with its turquoise waters. There are huts, food establishments and even a resort here – the Das Traum Guesthouse. Many have often referred to Siquijor as having the most beautiful port in the country because of this beach. 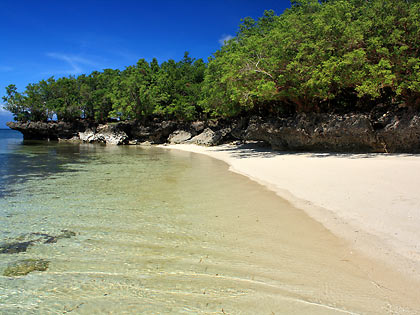 This mass of coral rocks on a white sand beach was our first view of Paliton Beach but there was more to come.

The next town on our itinerary after Siquijor is San Juan, the town with the highest concentration of resorts anywhere on the island. Just after the boundary with Siquijor town we took the detour from the main highway to Paliton Beach. We noticed a signboard that indicated Paliton is also a marine sanctuary. Indeed when we started dipping into its shallow waters we immediately spotted corals in crystal-clear water lying not too far from the beach, some sea urchins and several fishes darting out of our path. As a marine sanctuary, Paliton is a diver's dream with three submarine caves where divers can spot sleeping reef sharks and plenty of other marine life. 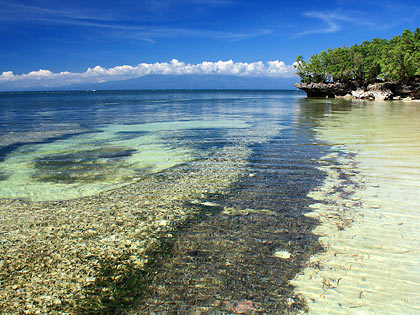 Beyond the mass of coral rocks is a palm-lined beach – still part of Paliton – where we spotted several docked fishing boats. Unlike San Juan's other beaches there are no resorts here and we were the only ones on this piece of paradise. The sand is blindingly white, fine and soft on the feet – almost like Boracay's. We later learned that the owner of Coco Grove Beach Resort also has a beach front property here. Fortunately we got to Paliton while the beach is still in a very pristine state.

It's hard to leave a scenery like this; hopefully Paliton Beach will remain in its pristine state for others to enjoy.

There is a resort at the southern extremity of Paliton Beach – the Danish Lagoon. This is where the long string of resorts – and a similarly long string of palm-lined white sand beaches in San Juan begins – all collectively known as Poblacion San Juan Beach. To get to any one of these beaches means passing through these resorts or through private property. We decided on visiting the beach in front of Coray Cay Resort which is actually not too far from Paliton Beach. We got friendly with the resort staff and asked them if we could stroll around the beach and take some pictures to which they agreed. The beach at Coral Cay is typical of the San Juan beaches – with fine, powdery white sand, shallow and calm crystal-clear waters with seagrass scattered about and coconut palms lining the shore. The sunsets here are reputed to be the best in Siquijor and among the most spectacular in the country. 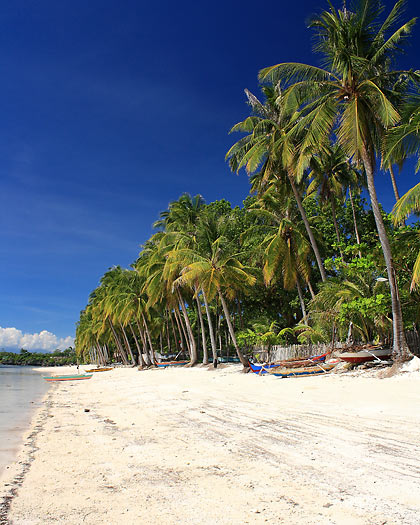 The beach in front of Coray Cay Resort. Debris brought in by strong waves at this time of the year somewhat mars what would have been a perfect tropical beach scene.

There's plenty of good diving here as well. Maite Point near the town center is known for several small fishes, octopus and giant sea slugs. Tubod Sanctuary is reputed to have the best corals in the island. The latter is located near Coco Grove Beach Resort at the southern end of the line of resorts in San Juan. We attempted to see the beach at Coco Grove but decided against it when we learned from their staff that we each have to order P200 worth of consumables just to get in – a considerable amount to shell out when we all we wanted was to just see the beach.

Most beaches in San Juan proper look like this.

On our way back to Larena we happened to pass by Capilay Spring Park which was just beside the road. Although this destination is often in the itinerary of locally-arranged one-day tours we had already decided against it before coming here. The concrete-lined pool, chairs and benches were just too unappealing to us although maybe the locals benefit a lot from taking a bath in its waters. We also were not able to make it anymore to Lugnason Falls in Barangay Napo which is not as famous as Cambugahay Falls in Lazi but still beautiful nonetheless, judging from the pictures we saw. Dondon told us it would be difficult for the trike to make the uphill drive towards the jump-off point to Lugnason and we were too tired late in the afternoon anyway so we left it at that. 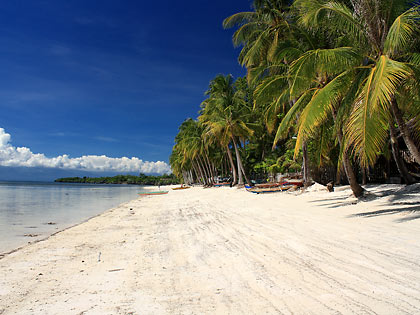 Another look at the San Juan beach in front of Coral Cay Resort.

Other Places to Visit in Siquijor Town

On our way back to Larena through Siquijor town we passed by the St. Francis of Assisi Church near the port and town center. Interestingly the belfry is separate from the church, being located several meters away. During Spanish colonial times, this part of the Visayas witnessed several raids from pirates seeking to snatch and enslave inhabitants. Many of these belfries have been utilized as watchtowers to warn the locals of approaching raiders. At its location, away from the church, the St. Francis of Assisi belfry does offer a good view of the town and sea. 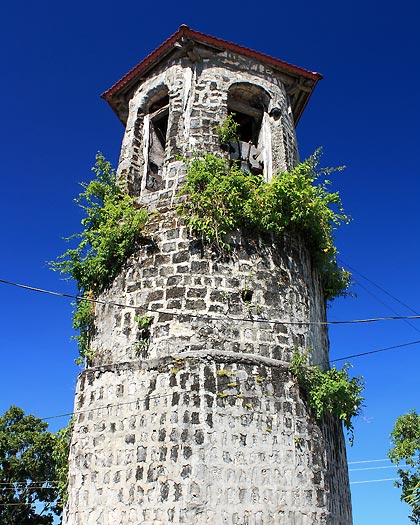 The belfry of the St. Francis of Assisi Church, Siquijor town.

Our two-day tour of Siquijor practically ended with our visit to the St. Francis of Assisi Church and the beach beside the port. However there are many other attractions in Siquijor town besides its churches and beaches. Siquijor has several caves located in the interior, the most famous of which is Cantabon Cave. There are over 45 caves in the province and many of them are located in this part of Siquijor. Not too far from Cantabon Cave is Mt. Bandilaan, the highest peak in the island and also home to many of the island's famous healers. The forested area around Mt. Bandilaan has been declared a national park. A butterfly sanctuary lies at the foot of the mountain, although it is located within the boundaries of Larena. Tourists are just now beginning to explore Siquijor's interior and exploration/trekking tours to the caves and Mt. Bandilaan can now be arranged. 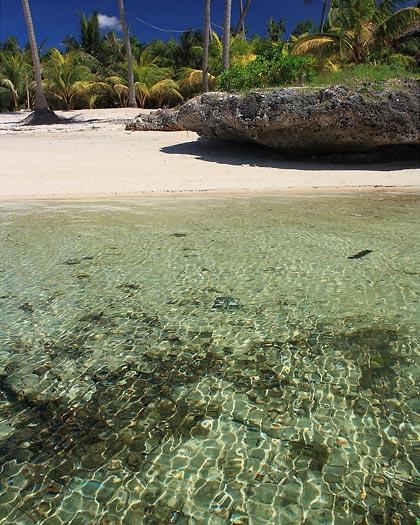 There are several ferry rides to Siquijor everyday from Dumaguete (another port in the island that caters to Dumaguete ferries is in Larena). So if you're planning to stay in Siquijor town or San Juan upon arrival, it's best to catch the ferry going to Siquijor port rather than to Larena. Trike tours can be arranged with the locals to destinations in Siquijor and San Juan towns. San Juan is located just after Siquijor town on the way to Lazi on the southeastern part of the island.