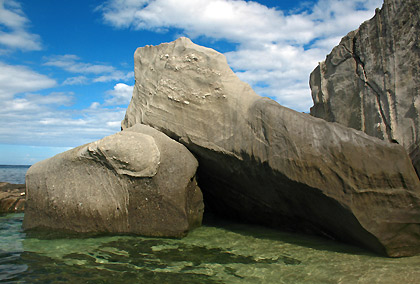 We've first heard about Capones Island, Zambales from a friend working in the showbiz industry after they have done a photo shoot on the island. So in December 2005 we decided to drop by Capones and the adjacent Camara Island along with fellow shoestring traveler friends on a road trip to the Ilocos coast. Our jump-off point was the fishing village of Pundaquit. In typical shoestring traveler fashion we rented a small hut by the beach and tried to hire a boat to take us to Capones. But it was already well in the afternoon and the waves pretty strong so the boatmen were afraid to take us. We had to wait until the next morning to get there. We later learned that the waters of the surrounding South China Sea can get pretty rough in the afternoon, particularly during the monsoon months. (Most of the boats in Pundaquit back then did not even have life vests although those are now a standard feature for boats in the area.) 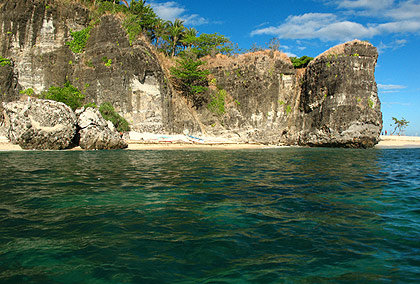 Even during the following morning we found the waves still a bit rough. We could not even get off on Camara since the beach area where boats usually dock was buffeted by strong waves. We would finally get to visit this island four years later – during a Holy Week break. Camara Island comprises two large rock islets connected by a strip of white sand bar that disappears at high tide. The surrounding waters are a pleasant emerald green. Huge rocks are scattered across the island. You can go beach combing and snorkeling here but since the island is relatively small there is little else you can do except to take pictures. 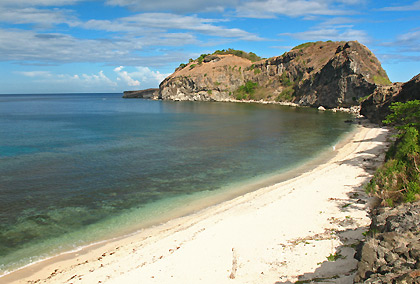 White sand beach on the eastern side of Capones Island.

From Camara, our boat continued on to Capones Island, another island with big rock formations and boulders set against high cliffs. There is little soil here so vegetation is sparse. Capones is surrounded by a number of white sand beaches. The best stretch of beach for us is located on the eastern side. This particular beach features huge, stunning rocks and boulders and is also a good place for swimming and snorkeling. You can find a good number of fishes swimming among the rocks. We also climbed the hill just beyond the beach to be rewarded with a really nice panoramic view of the crescent-shaped beach below. Capones offers a lot of excellent photo opportunities. 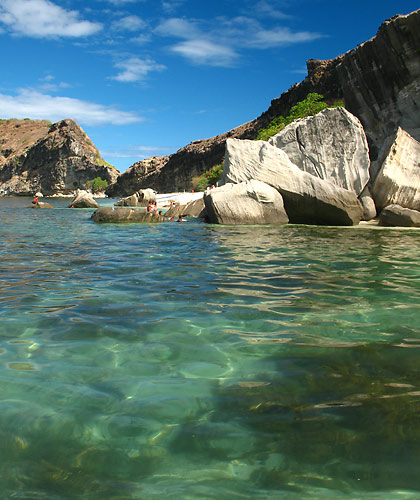 You'll find other blogs talking about the lighthouse of Capones and how it offers a breathtaking 360-degree view of the entire island, the mountain ranges on mainland Zambales around Pundaquit and the vast horizon of the South China Sea. We decided not to visit the lighthouse on our second trip to Capones since we still planned to go to Anawangin Cove on the same day. Looking back, however, we now regret we did not take the time to do so. Oftentimes it takes a few trips to a particular place to really appreciate its beauty and to be able to take excellent pictures. But this was already our second trip to Capones and we still failed to see its lighthouse...

It is best to go to Capones and Camara Islands during the summer months of March to May when the waters are calmer. (By the same token there are more visitors during those months.) Both islands are visible from the beach at Pundaquit and just 15 to 20 minutes away by boat. The two islands are 3 kilometers away from each other. Most visitors include Anawangin Cove on their itinerary, and perhaps possibly the more distant Nagsasa Cove. One request when visiting Capones Island from this shoestring traveler couple though: please do your best to keep the island clean. We were disappointed to find a considerable amount of thrash strewn about at certain spots in the island. Let's try to preserve the island's beauty for generations to come.