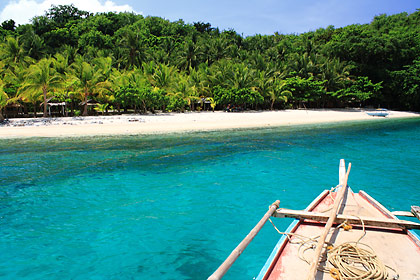 With its white sand beaches, turquoise waters teeming with diverse marine life, rushing waterfalls hidden in dense tropical rainforests and verdant rice terraces set amidst the backdrop of gently rolling hills – the island province of Biliran seems to have it all. Tucked away beyond the northern reaches of Leyte, Biliran is relatively unknown to most tourists to the Philippines. However, a bridge directly linking this island to the northern tip of Leyte makes it easily accessible to travelers arriving at Tacloban City.

I had been intrigued about Biliran for so long that the time came when I couldn't resist seeing the place for myself any longer. Nina was supposed to come along but had to beg off due to an unforeseen circumstance. I ended up meeting with Oggie, an old friend and native of Ormoc City, Leyte at Biliran's capital of Naval. 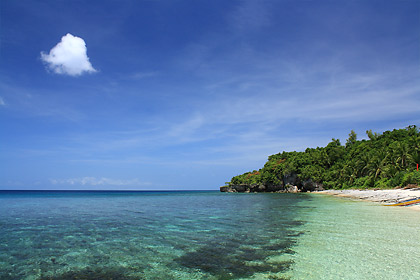 Lone cloud over a beach in Higatangan Island, Biliran.

There are a few lodging places in Naval that offer budget accommodations. However, unlike similarly priced establishments elsewhere in the country, they seem to be cleaner and better-maintained. TJ Lodge, the place where we stayed at for P580 a night (air conditioned room for two), has cable TV and free wi-fi. There are more upscale resorts in and around Naval such as Chamorita Beach Resort and Marvin's Seaside Inn that are reasonably priced. As shoestring travelers we chose TJ Lodge also because of its proximity to the pier, bus terminal and city center. The town center of Naval is not that large and could easily be traversed on foot. 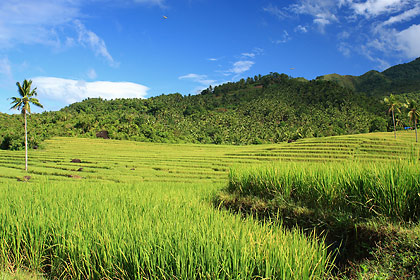 Iyusan Rice Terraces, Almeria. These terraces can be viewed on the way to Bagongbong Falls.

We spent our first day touring the island's waterfalls. Biliran has several spectacular falls and many are accessible only on foot through wooded hills and forests. First on our list was the Bagongbong Falls of Barangay Caucab in Almeria town just north of Naval. Along the way to Bagongbong we passed by several terraced rice fields on the rolling hills of Iyusan, also in Almeria. We couldn't help but notice not only how fertile Biliran's soil is but also how industrious the locals are in making the most of a hilly region normally unsuitable for farming. Bagongbong Falls itself is accessible via a moderately difficult and steep downhill hike although a major portion of the route through the hills has now been concreted.

Tinago Falls in Caibiran is the most visited falls in the whole province because of its proximity to a well-paved cross-country road. One only has to walk a short distance from the parking lot to the falls itself. There are several other notable waterfalls in Biliran such as Ulan-ulan Falls (in Almeria), Casiawan Falls in Cabucgayan, Tomalistis Falls in Caibiran and the Recoletos Falls also in Almeria.

Sambawan Island in Maripipi (north of the main island of Biliran) was high on our island-hopping list but we later learned from our tour guide that it was still recovering from the effects of a strong typhoon last year. Sadly, it seems much of its white sand beach had been eroded by strong waves generated by the howler. It was also a good 1.5 hours away through an open sea buffeted by rough waves around this time of the year. 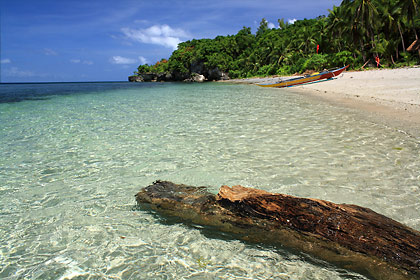 One of the beaches at Higatangan Island.

Instead we headed off towards Higatangan Island along Biliran's western coast, just 45 minutes by boat from the pier at Naval. Higatangan was past Philippine president Ferdinand Marcos' hiding place during World War 2 and boasts a long, shifting sand bar where we docked and frolicked for a while. Afterwards we set sail for the white-sand beaches and rock formations of the southern and western faces of the island. 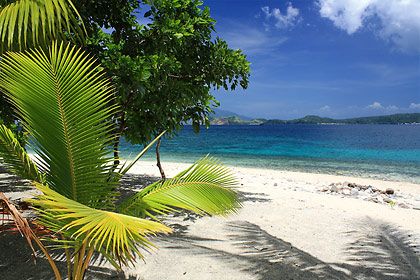 Coconut palm on Dalutan Island; the main island of Biliran is easily visible in the background.

From Higatangan we hopped over to Dalutan, a small island just off Agta Beach in Almeria. With its white sand and turquoise waters teeming with marine life, Dalutan was a typical beach bummer's haven where we got to laze around, snorkel and enjoy the underwater scenery to our hearts' content.

There are everyday flights from Manila to Tacloban. Try to get flights that leave in the morning to avoid traveling by night and to enjoy the beautiful scenery along the way. From the airport at Tacloban you can ask a taxi to take you to the transport terminals of Duptours or Van-Van – both have vans that make several trips to Naval. Otherwise you can go to the New Bus Terminal to get buses or other vans bound for Naval. Vans usually travel much faster than buses so we opted for the former.

Travel to Naval by van usually takes around 2.5 hours (this depends on the driver; my trip to Naval actually took almost 3 hours but my return trip to Tacloban took just slightly more than 2 hours) and as of this writing costs P130 one-way. On my trip to Tacloban for the return flight to Manila, the van offered to take me to the airport for an additional P50 (on the condition that there are at least 3 other passengers bound for the airport).

Looking back it was clear that two to three days were not enough to be able to take in all the beauty that Biliran offers. In waterfalls alone, there are at least 8 that deserve a visit. There are also several beaches on the main island besides the ones on the islands off shore. It's indeed MORE FUN... in Biliran!