Please go to this page for an updated story on Dasol.

Some of the most beautiful places in the Philippines are also among the least known and accessible. Until recently, the Caramoan peninsula and its surrounding islands were hardly mentioned in travel guidebooks – until it was featured in the 2008 French version of the reality show Survivor. Today, thanks to the internet, people are discovering scenic places in the most unlikely of locations. Getting to those places in one piece, however, is still a challenge. 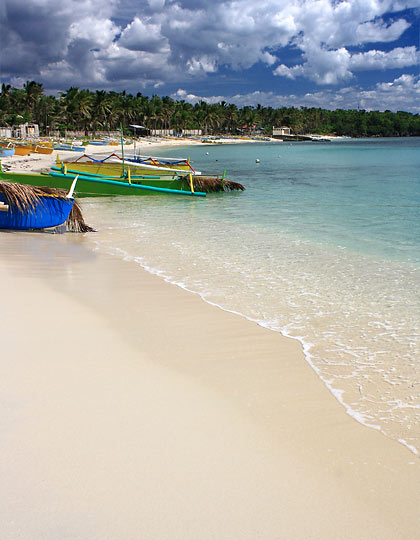 In the early 2000's a popular travel guide about the Philippines mentioned about a remote but beautiful coastal village in Pangasinan province. The book referred to the nearby Hundred Islands in Alaminos as "overrated" and instead recommended the beaches in the coastal area of Dasol. But it also stated that the place was only accessible by boat or a long, bumpy ride over rough terrain from other coastal towns in the province. That ended any thoughts we had about paying the place a visit. However, after negotiating the long road from Olongapo in Zambales to Alaminos in Pangasinan during the time when we were living in Baguio City, we happened to pass by Dasol town a few times. The beaches in sight were pretty much ordinary-looking so we wondered if the travel book was referring to some other place.

Enter 2010. We discover that the Dasol the travel book referred to was in fact the fishing village of Tambobong, one of the barangays of Dasol, and its nearby beaches and islands. Tambobong is about 18 kilometers away from Dasol town proper over mostly unpaved road. That sounded like we needed a 4-wheel drive SUV if we wanted to travel by land. Later on however, we found out that some bloggers on the internet were able to make it to Tambobong on ordinary cars. We also learned that if we took the road from Burgos to Tambobong instead of from Dasol, the going was better. 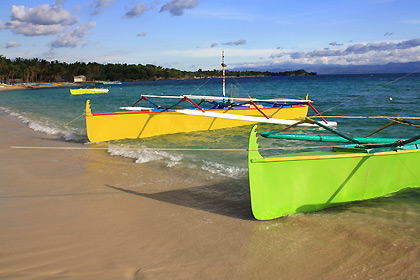 The way from Burgos to Tambobong turned out to be longer than the Dasol road – more than 20 kilometers – but for more than half of the trip we made good going on stretches of newly paved road. It was on the other half of that road where we encountered hard going, namely a total of about 6 kilometers of unpaved and gravelly road so rough it made us wonder if we were going to make it at all to Tambobong and back – and kept us praying that we won't suffer a flat tire or worse. 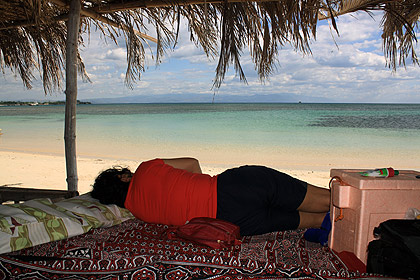 Sleeping under a cool shade on a lazy afternoon at Tambobong Beach.

The Lord answered our prayers and we made it safely to Tambobong. The entrance to the coastal village is marked by – of all things – a vulcanizing shop. Our accommodations were typical shoestring traveler-friendly: a home stay-type of resort near the northern end of the beach for an P800 overnight fee (without aircon which we really didn't need at this time of the year). Just across the road from the resort was a line of huts on the beach where we had lunch and lazed away the afternoon as we gazed at the beautiful fine sand and the crystal-clear waters. The cool shade of the huts and a gentle sea breeze combined to lull us into a restful sleep after lunch. 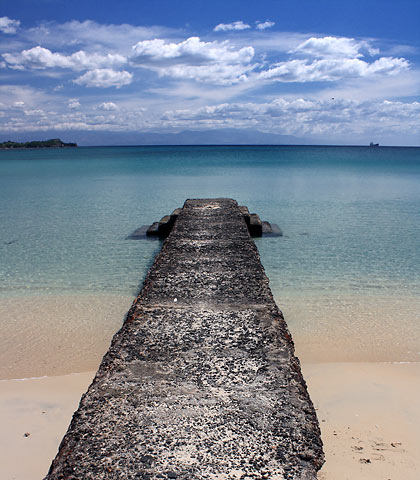 As mentioned earlier, Tambobong beach is also a fishing village (it is actually part of Barangay Osmena now but the locals still call it Tambobong). Colorful boats lined the beach and there is even a small concrete pier that juts out from shore near the southern end, a good platform for taking pictures. We got to talk to a few people at work on the beach: two ladies washing newly-gathered sea weeds and a group of fishermen hauling their catch. We talked the fishermen into selling us some of their catch.

The beach itself is a long, curving stretch of beige sand. The biggest surprise for us was how the beach front was that clean, something unusual for a fishing village. The waters offshore are clear and shallow to several meters out, an excellent invitation for a nice swim. 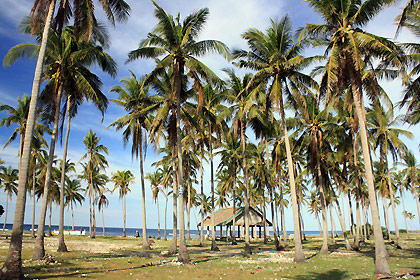 The way to Cabacungan on foot took us through this coconut-lined field overlooking the sea.

Beach-bumming at Tambobong alone is worth the hassle of going through those rough roads but there is more. Easily visible from the village is the island of Colibra (or Culebra) which is good for snorkeling and swimming. Cabacungan, a rocky, coral-filled island at the northwest end of Tambobong Beach is accessible on foot, especially during low tide. Crocodile Island, so named because its shape closely resembles the reptile, lies close to Cabacungan and may also be accessed on foot when the tide is at its lowest. Balinmanok is a clean beach with clear waters on Tambobong's southern end and is also good for snorkeling. Not visible from Tambobong, Balinmanok may be reached in 10 minutes by boat from the former. A boat said to have been used by drug smugglers had been towed to within 50 meters of the shoreline and left there; the resulting wreck has spawned corals and colorful fishes. There is also a nice beach just south of Balinmanok and still part of Osmena. 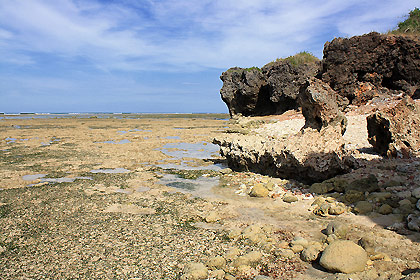 A rocky shoreline characterizes the beach adjacent to Cabacungan and the cove itself.

Unfortunately we could not take a boat to Colibra or Balinmanok because of the strong waves generated by rather unusual weather at this time of the year. Instead we took a long walk through the interior get to Cabacungan and Crocodile Islands. The walk took us through a coral rock-strewn beach also filled with several tidal pools, a scene that made for several photo-ops. Cabacungan itself is a rocky, slightly elevated outcrop that has a tidal shelf stretching out a few meters from a small cove before plunging into the sea below. Cabacungan also has a small cave with an emerald-colored pool. Our guide said that the water in the pool is calm and safe for swimming in the summer months but at this time of the year, the crashing of sea water into the cave made swimming in the pool very hazardous. 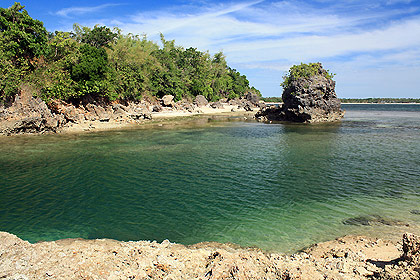 On our way back to Tambobong from Cabacungan Cove we were fascinated by this narrow but deep channel that led to another beach. Tambobong Beach is visible beyond the rock on the right background.

Traveling by private vehicle: It's best to make this trip on an SUV, AUV or any other vehicle better suited to rough terrain. We've made it using an ordinary 4-door sedan but it's definitely safer and less nerve-wracking to use more rugged vehicles. There are two ways of going there from Manila: one is through the North Expressway continuing on to Tarlac City via the Subic-Clark-Tarlac Expressway (SCTEX). The other is via Subic, also via SCTEX, then on to Iba, Zambales and up north towards Alaminos. This road will take you to Dasol and Burgos before you reach Alaminos, both of which have roads that go to Tambobong.

The drive to Tarlac City-Alaminos is somewhat shorter although the drive along Zambales is more scenic, featuring good views of the coast. (We opted for the Tarlac route.) At Tarlac City take the road going northwest to Alaminos, Pangasinan via Camiling. Before Alaminos town proper take the short diversion road to Mabini where the main road south takes you to Burgos town. In Burgos ask and look around for the road that goes to Tambobong. This road is on the right side of the main highway in Burgos opposite a gas station. Half the initial distance to Tambobong is along a well-paved road while the other half alternates between concreted and rough roads. You'll encounter a few forks along this road but since it is too long to describe in detail here, just ask around for directions or go to Matabang Beach Resort's Multiply page for a detailed map. There is another road to Tambobong from Dasol town but we opted against this when people advised us that this was an even rougher road. Total travel time from Manila is around 6 hours, depending on how fast you go through the rough roads. 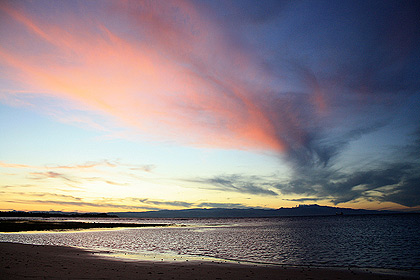 The start of another day in Tambobong; the hilly mainland of Zambales is visible in the right background.

Public Transport: Take a Victory Liner bus from Cubao to Alaminos (about a 5-hour trip). At Alaminos town proper, take another bus going to Olongapo and drop off at Burgos market. From there you can take a tricycle ride to Tambobong beach for about P300.

There are three DOT-accredited resorts in Tambobong and since the place could be full in the dry months (April to May), it is probably best to make reservations at those times. We visited in February and were the only people in Ate Benilda Donato's Tambobong White Beach Resort.

We mentioned other places near Tambobong that are worth a visit. Cabacungan and Crocodile Island are accessible via a long walk from Tambobong. However if you are exploring other places like Balinmanok and Colibra Island, it is better to visit all 4 places by boat (boats for rent normally cost P700 at the time of this writing and can accommodate up to 7 people). You can also visit Timapog na Bato in Barangay Ilio-ilio in Burgos town by boat. This is a white-sand beach with big rock formations where the water is shallow and good for snorkeling. It is a 30-minute boat ride from Tambobong. If you include this in your itinerary it will probably cost more than the P700 we mentioned since it is further out from Tambobong compared to Colibra Island and Balinmanok. A guy from the resort we stayed in told us that he can also take us to other beaches towards Burgos town by motorbike should we decide to come back. 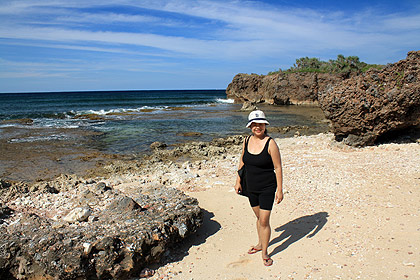 Cabacungan Cove. A coral shelf juts out from the shore before plunging into the sea several meters from shore.