Pagudpud: Jewel on the Edge of Luzon 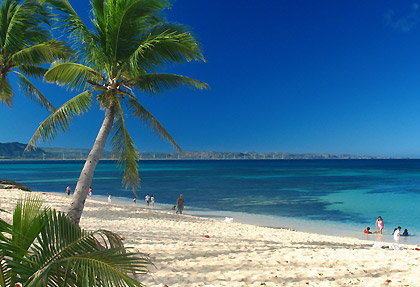 At the extreme northwestern part of the island of Luzon lies a town blessed with several white-sand beaches, vibrant waterfalls, windswept coastal cliffs and azure waters. Its natural beauty rewards those with the patience to make the trip to this remote destination. Located approximately 560 kilometers north of Manila or about a 12-14 hour drive, Pagudpud is remote enough to avoid the legions of tourists that swamp more popular and accessible destinations such as Boracay and Puerto Galera.

These shoestring travelers were first attracted to Pagudpud in 2000 when we went on a road trip to the Ilocos Region from Baguio City. Our first instinct was to head up to "Pagudpud Beach," a long, palm-fringed seafront we often see in many travel photographs of the Ilocos Region. We later discovered that "Pagudpud Beach" is really Saud Beach and that there are actually three major white sand beaches in Pagudpud, the others being Maira-ira and Pansian. With these three beaches Pagudpud can lay claim to having the best beaches in northern Luzon. 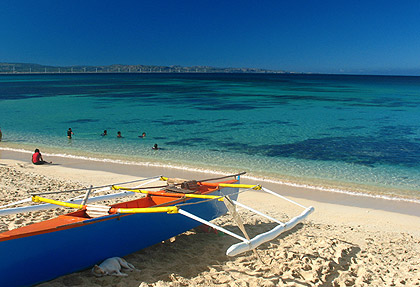 Boats are color-coded in this part of the Ilocos. At Saud Beach in Pagudpud they are colored blue.

Saud Beach is the most popular of the three and boasts of a long, creamy-white sand beach lined with coconut palms. The clean, turquoise waters definitely look inviting but can be rough during the monsoon months since Saud faces the open Bangui Bay. The beach, for the most part, gently slopes into the sea, making it good for swimming during the summer months. However extra caution must be taken when swimming since there is a sudden drop-off at some point from shore. On a clear day the Bangui windmills are easily visible in the distance. There are several resorts in Saud with accommodations ranging from inexpensive nipa huts to more luxurious rooms in the Saud Resort. However, the beach is not crowded like Boracay. All things considered, Saud Beach is one of our favorites for its size, sand quality, rows of palm trees and crystal-clear waters. 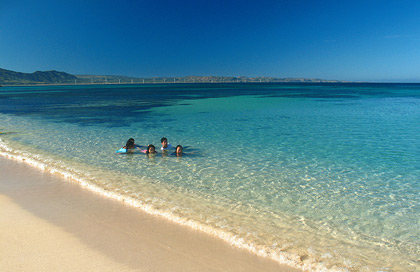 Local folk swimming in the crystal clear waters of Saud Beach. The windmills of Bangui are clearly visible in the background.

We've not yet had the chance to visit Maira-ira but this beach, also called Blue Lagoon, is fast becoming popular. Said to be more scenic than Saud, Maira-ira also has calmer waters, a gently sloping beach and sandy bottom making it even better for swimming. Its azure waters give Maira-ira the name Blue Lagoon, although a lagoon it certainly is not (it's actually more of a cove). As of this writing there is just one resort in the area. The beach is accessible via a rough road from Saud with a travel time of around 20 minutes. Pansian Beach is located even further out, almost at the border of Cagayan province and therefore rarely gets visitors. 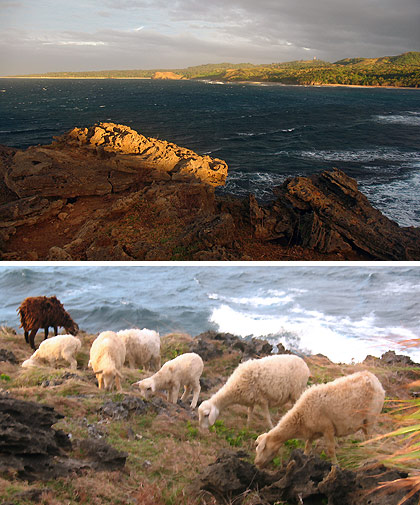 Top: Sunset view of rugged coast from atop a cliff at Hidden Treasure Resort; Bottom: a group of sheep grazing near the top of the same cliff.

Its name offers a clue to its accessibility. Hidden Treasure Resort would have remained hidden from us if not for Art, our Paoay-native friend who led us to this place on our third Ilocos Road Trip in 2005. The road leading to the place was rough and relatively long but the vistas along the way were unlike any other in the Philippines, consisting of grasslands with a sprinkling of pine trees and framed by a series of low hills in the background (just like the bush country as a South African acquaintance of Art said). 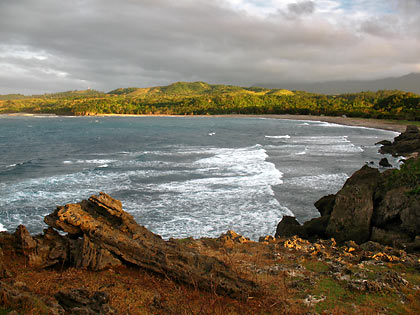 The resort itself is located in Barangay Caparispisan, near the top of a cliff along the sea. Atop the cliff you are rewarded with dramatic views of the coast including panoramic views of a white sand beach in the distance – whether that's Maira-ira or Pansian we are not certain. The first time we arrived at Hidden Treasure was just after the monsoon months and the whole place was carpeted with green grass like a well-manicured lawn. It reminded us about the coastal cliffs in Europe and it amazed us to think that there is actually a place in the Philippines like this. The resort itself offers inexpensive if rustic accommodations that definitely suited our shoestring traveler wallets. 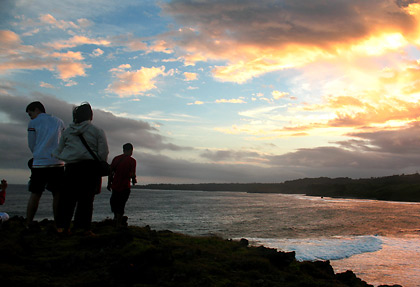 Despite its remoteness we'll probably visit Pagudpud again in the near future, especially Maira-ira Beach, the waterfalls in the area and hopefully Pansian Beach. You never get tired of visiting a place with this kind of charm and beauty.