Vigan: Echoes of a Colonial Past 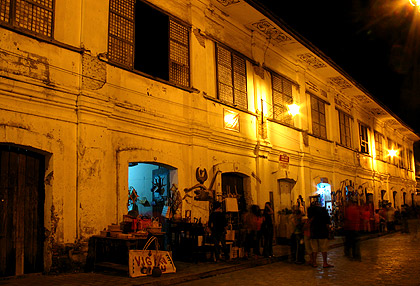 Walking along the cobblestones of Calle Crisologo in Vigan, Ilocos Sur takes one back to life during the Spanish colonial era. There, more than one hundred houses built during the 18th and 19th centuries have remarkably retained their original architecture: a blend of colonial European style, Filipino design elements and indigenous materials. 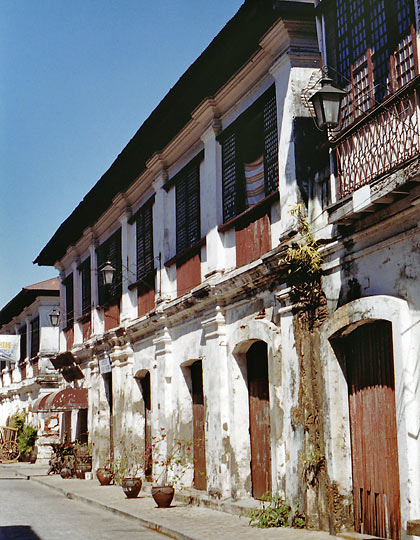 Despite the pressure to modernize this part of Vigan, the city seems determined to preserve its heritage. The Vigan Heritage Village, also known as the Mestizo district because of its proximity to the Mestizo River, has been declared a UNESCO World Heritage Site. It is also the best-preserved example of a Spanish colonial town in Asia. The banning of modern vehicles at Calle Crisologo (to better preserve the cobblestone street) and the presence of horse-driven kalesas offering rides add to the heritage atmosphere of the place. 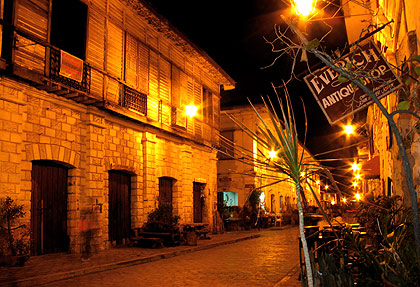 Old houses and antique shop along Calle Crisologo at night.

We've always been fascinated by Vigan and have visited the Ilocos Sur capital and its Mestizo district three times now. Built mostly by rich Chinese traders, the ancestral houses are typically two-storey fixtures where the ground floors are made up of stone or brick and the upper floors are constructed mostly of wood. Tile roofing and kapis shell windows common to Philippine ancestral structures adorn the houses. 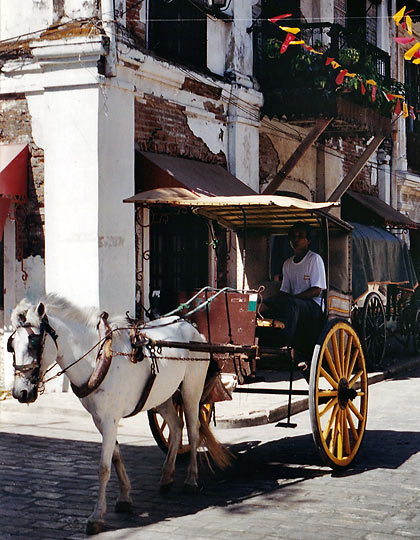 Shops selling wooden furniture, jars and souvenir items occupy the first floor in many of these houses. At first we thought this too commercial for such a heritage site until we realized how expensive it is to maintain these structures given the ravages of tropical climate. Perhaps this is a way for owners to raise the needed maintenance funds. It is also reflective of the fact that during the economic heyday of this city, many of the entrepreneurs actually worked from their homes with the shops occupying the ground floor and their residences on the second storey. 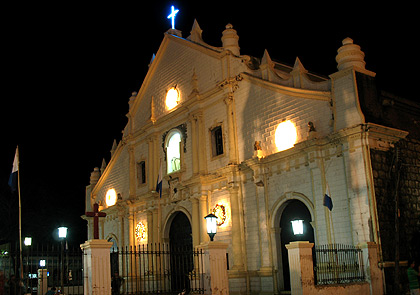 There are other interesting sites in the city. Plaza Burgos, named after Father Jose Burgos is located close to Calle Crisologo and includes St. Paul's Cathedral (sometimes known as the Vigan Cathedral), another impressive example of Baroque architecture. Like many church structures in the Ilocos region, the bell tower is placed apart from the main church building, a design meant to increase resistance to major earthquakes so common in this region. 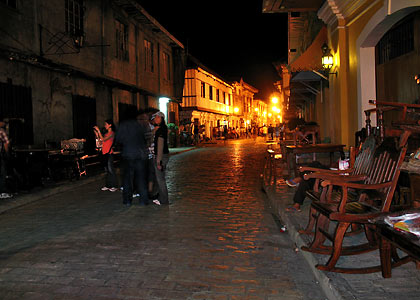 Furniture on display along Calle Crisologo at night. 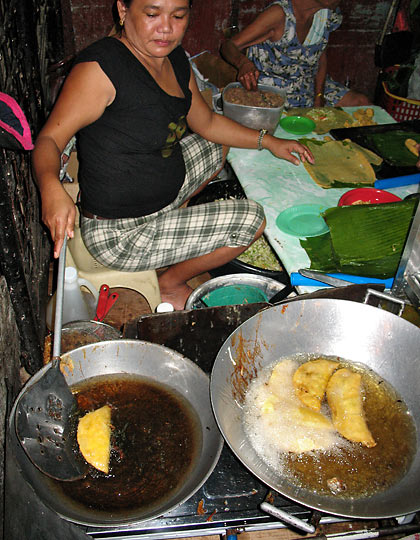 Preparing the Vigan version of empanada at Plaza Burgos.

In Leo's hometown of Pateros we looked with sadness over the last several years at how old, Spanish era houses were dismantled to make way for modern structures. This makes us all the more thankful for the farsighted Vigan folk who took pains to preserve one of the last few remaining vestiges of colonial architecture in our time.