Davao: Durian and More Besides 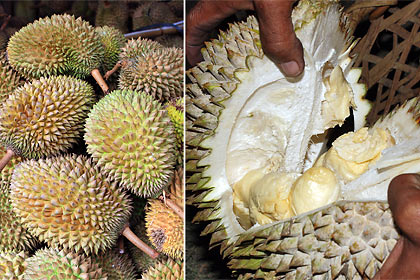 With a total land area of 2,444 square kilometers it is the largest city in the Philippines in terms of land area. To foreign visitors who know little about this place, its location in Mindanao instantly conjures up a red flag. But, according to the data released by the survey site Numbeo.com, Davao City is the fourth safest city in the world with a safety index of 82.06 or a crime index of 17.94. Having visited Davao several times (Nina worked there for one year before we got married) it's probably the Philippine city closest to our hearts. There are a variety of reasons why.


Davao is a virtual paradise of exotic tropical fruits. Many of the fruits common here are not found in considerable quantities in other parts of the Philippines. Davao is synonymous with durian, and is often referred to as the "durian capital" of the country. And for good reason since it supplies some 80% of the durian in the Philippines. You haven't really been to Davao if you fail to sample a durian. However, if you're not exactly thrilled by the fruit you can try one of the numerous sweets and desserts made from durian including durian candy, pie, ice cream, pastel, cake, hopia, piaya and many more.

The marang has an appealing interior appearance.

(For more pictures of Davao visit our Flickr album)

Another exotic fruit is the marang, a strongly scented fruit – though not as intense as the durian – which looks like a cross between a jackfruit (langka) and a breadfruit. The interior of the marang looks quite appealing with its soft and juicy white flesh. Because of its short shelf life, the marang needs to be consumed quickly once it ripens. Other fruits include the mangosteen (a sweet and tangy fruit with a reddish-purple colored rind when ripe and a soft white flesh), pomelo, and the hairy, reddish rambutan. The mangosteen is increasingly being valued for its many health-enhancing benefits. 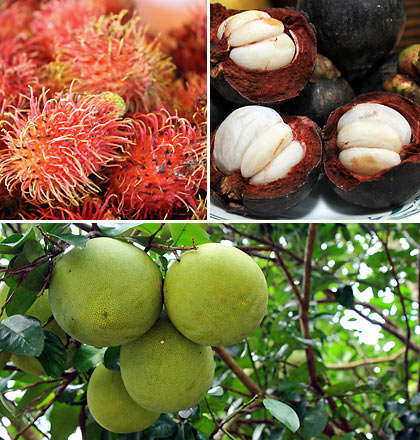 Although there several areas in the city that house fruit stands such as Magsaysay Park, the Agdao Public Market and the Bankerohan Market, you can get really cheap fruits by venturing to the outskirts of the city such as Calinan. The prices of fruits, especially durian, mangosteen, marang, rambutan and lanzones drop sharply from August to early October. This is the time when you can get durian for as low as P20 per kilo (or even as low as P10 in some places outside Davao City). 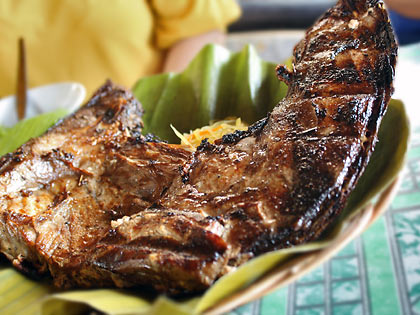 Another food item synonymous with Davao is the panga ng bariles or jaw of a yellowfin tuna. Davao is the country's second largest source of this fish, next only to General Santos City and quantities of the delicious jaw of the yellowfin find their way into Davao's markets, restaurants and food stalls. Along with the kinilaw na malasugi or broadbill swordfish ceviche (oftentimes the malasugi is translated as blue marlin), the grilled panga ng tuna is definitely one of the must-try items on a Davao food trip list. 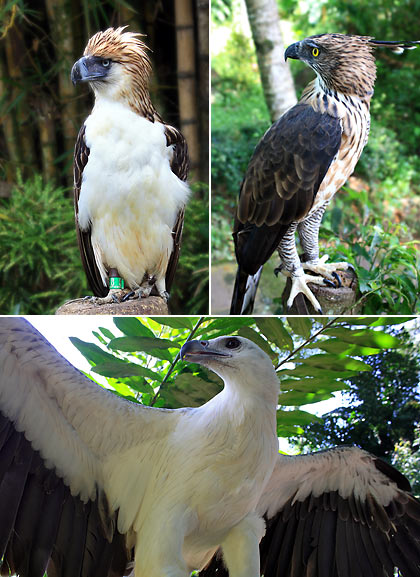 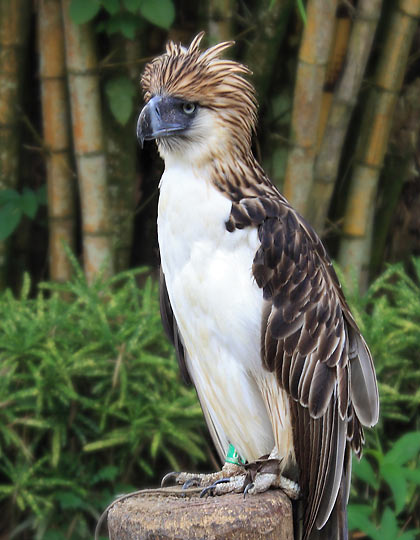 The star of the Philippine Eagle Center is of course the Philippine Eagle. Formerly called the monkey-eating eagle, this large and powerful bird preys not only on macaques but also on flying lemurs, flying squirrels and wild cats (musang). Some have even fed on small deer weighing 14 kilos – a testament to their strength and size. Sadly, this second largest of all eagles in the world in terms of weight and body mass (but largest in terms of body length and wing area) is critically endangered due to the loss of its forest habitat and poaching.

Another wildlife haven is the Davao Crocodile Park. Well not exactly wildlife since this park houses over 700 hundred cultured crocodiles. Located at the Riverfront Corporate City in Ma-a, the Crocodile Park also houses a variety of other animals including Siberian tigers, orangutans, monkeys, iguanas, monitor lizards, various species of birds including several parrots, Philippine deer, porcupines, Palawan bearcat, bats, ostriches and several species of snakes. It actually functions more like a leisure park than a zoo, offering several activities like bird shows, crocodile frenzy/feeding, crocodile walking, tightrope walking and interaction with the animals.

What interested us here besides the variety of wildlife are the various displays of products made from the crocs. It would seem that no part of the animal gets thrown away as we went through displays of such products like wallets, bags, belts and other leather products (one whole crocodile skin alone costs P80,000), crocodile oil, soap and even crocodile meat and ice cream. We were particularly intrigued by crocodile ice cream. Would they really include crocodile meat in an ice cream? We later realized that the ice cream was simply made using crocodile eggs; the ice cream tasted just like ordinary ice cream but was supposed to be healthier since it contained less cholesterol.

Crocodile products at the Crocodile Park.

Near the Crocodile Park and in the same complex as the Riverfront Corporate City is the Butterfly House, the Tribu K Mindanawan cultural village and the Davao Wildwater Adventure, Incorporated which offers wild water rafting on the Davao River.


The People's Park in downtown Davao is practically a theme park with its life-sized sculptures of native Mindanao people, lush foliage containing several species of flora from other countries, dancing fountains, artificial waterfalls and a children's playground. If you're looking for a place of quiet solitude away from the noise of the city, then head up to the Eden Eco Park with its green surroundings and vast canopy of some 100,000 pine trees.

If it's shopping you're after you can shop conveniently at several malls in the city including SM City Davao (in Matina), SM Lanang, the Abreeza Ayala Mall and a host of Gaisano and NCC malls. But if you're looking for Mindanao souvenirs at reasonable prices, the Aldovinco Shopping Center located across the Marco Polo hotel on C.M. Recto St. is still the place to go. We've shopped for batik products here as far back as 1991 and it still continues to be one of the places to visit for this item. However, Aldovinco has steadily grown over the years and besides Minadanao artifacts such as shawls, jewelries, accessories, musical instruments, brassware and porcelain plates, the shopping center now also offers batik clothing from Indonesia and Thailand. 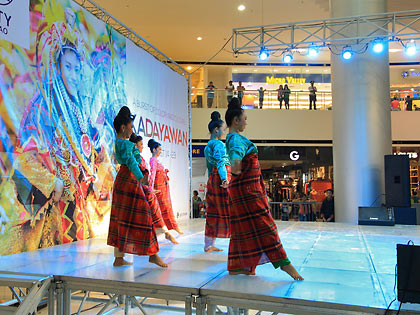 Kadayawan performance at one of Davao's malls.

If you arrive in Davao around the middle of August, you can catch the Kadayawan Festival and witness the floral float parade, street dancing and various exhibits and activities centered around the city's grandest festival. Davao is one of the first cities in the country to have something like this festival apparently, something Davaoenos are proud of. During our latest visit, we got a bit tired from frequent traveling and decided we would not bother jostling for space on the crowded streets for the float parade. We therefore ended up watching festival performances at one of the malls in the city.

Lotus flowers at a fish pond in Tugbok, Davao City.


With a major airport, bus terminals and an improved road network providing access to nearby provinces and regions, Davao City is the perfect hub for travel in this part of Mindanao. The provinces of South Cotabato, North Cotabato, Saranggani, Davao del Norte, Davao del Sur, Davao Occidental, Davao Oriental, Bukidnon and Surigao del Sur are all within easy reach of this hub city. 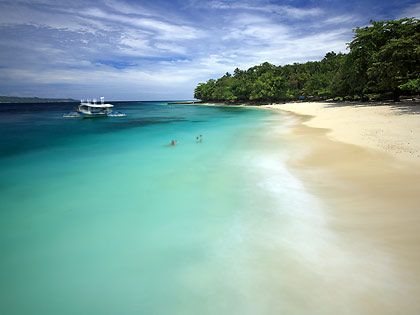 But there are also major tourist destinations just an hour or less away from Davao City itself. The Island Garden City of Samal (IGACOS) has several tourist attractions in Samal Island and in Talicud Island.

There are several white sand beaches, resorts, waterfalls, a cave that houses the largest bat colony in the world (the Monfort Bat Sanctuary is home to 2.3 million Rousette fruit bats) and other attractions in both locations plus several excellent snorkeling and dive sites. One can simply take a ferry from either the Santa Ana Wharf or Sasa International Wharf to several destinations in Samal or Talicud and still be back in Davao within the same day. It is even possible to ride a bus at Ecoland and go straight to Samal Island since the bus will take a roll-on-roll-off (RORO) ferry for Samal. All of these make Davao City a perfect tourist hub in eastern and southern Mindanao.

Visit our Facebook page for even more pictures on Davao City.