Gumasa Beach on a Cloudy Day 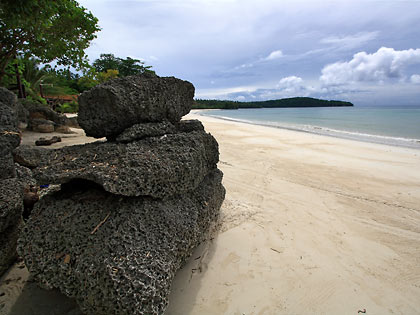 The van was packed to the max when we started our trip from General Santos City. We ended up paying for an additional seat just to accommodate our backpacks. After riding in much the same fashion on a previous trip to Lake Sebu, we had begun to wonder if this trip was worth the hassle. Speeding down the almost empty highway to Glan in the province of Saranggani, however, we began to catch glimpses of picturesque Saranggani Bay. It was a cloudy day but the view unfolding before our eyes was enough to sooth our nerves and assure us that this trip would be worthwhile after all. 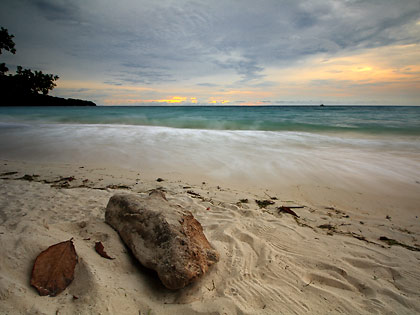 Our foray into Gumasa Beach in Glan, Saranggani was the second leg of our South Cotabato-Saranggani trip. We first learned about Gumasa Beach during our stay in the U.S. in 2006. We were visiting a friend of Leo who had migrated to Connecticut but who grew up at the Dole pineapple plantation in Polomolok, South Cotabato. He showed pictures of a beautiful and pristine white sand beach that he encountered during a recent visit to Saranggani which we later learned was Gumasa Beach. It wasn't as popular back then but we had Gumasa in our travel sights ever since.

An airline discount offer gave us the chance to fly to General Santos (GenSan) for a minimal amount. The municipality of Glan is just an hour away by van from GenSan so it was a no-brainer to choose our travel destinations for this trip (Lake Sebu was the other one). Gumasa's main attraction is its creamy white, fine sand beach located just a few kilometers south of Glan town proper. It's the crowning jewel of Saranggani Bay on this side of the province. A few resorts are lined up on Gumasa's long beach front but somehow development has not spoiled it. The beach still looks charming and untarnished the way we saw it on the picture from Leo's friend in 2006. 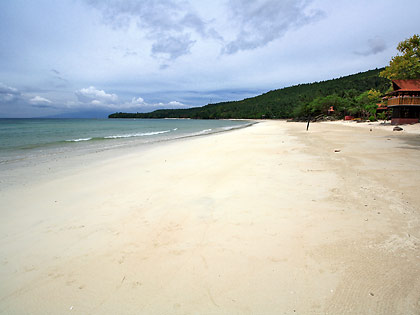 The main section of Gumasa Beach in front of Coco Beach Resort.

The main section of Gumasa Beach, a curving 2-kilometer stretch of white and beach, is where most of the resorts are located and where we stayed. Most of the resorts are owned by individuals from the same family. Initially we were hesitant to stay here because of the bad rap most of these resorts have gotten in social media circles for reportedly overpriced rooms and poor customer service. But wanting to stay in the most scenic part of Gumasa we decided to take our chances. Turns out that some of the criticism is justified. Some of the rooms are priced a bit too much and while some of the resort staff did their best, the front desk people are not customer-friendly.

It was a cloudy day when we arrived and it would stay that way for the rest of our time at Gumasa. It was a bit disappointing for Leo as white sand beaches tend to look their best for photography when the skies are blue and there are fewer clouds. We were practically the only people at the resort, however, so we had the beach all to ourselves. We were soon exploring the place, walking along the soft, powdery sand of Gumasa's main beach. When we got tired we simply reclined at the porch of our beachfront hut and enjoyed a nice view of the beach and Saranggani Bay.

We've heard that iconic boxer Manny Pacquiao has acquired a beachfront property here but has yet to develop it. We noted a vacant property between two of the resorts during our walking tour and surmised that this must be the place. (Common Manny, perhaps the resorts here need more competition to motivate them to improve their services.) 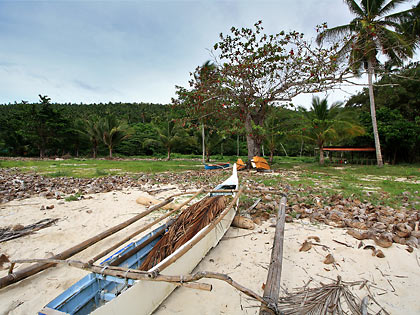 Gumasa's northern section also includes some resorts such as Davak Ridge Beach Resort but is much smaller than the main, central section. It is the same with the southern section where Isla Jardin del Mar is located. Both the northern and southern sections are separated from the main section of Gumasa by large rock outcrops. It would seem that we could only get to both sections from where we were by taking an overland route.

We were at Gumasa for only an overnight stay. We have a scheduled trip to Davao later this year and are looking forward to another chance to visit Gumasa, stay longer and frolic under a sunny sky. 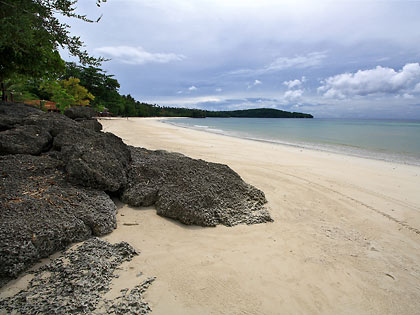 Coco Beach Resort. Nice beachfront, is located at the main section of Gumasa Beach and has the most number of rooms but is wanting in customer service. Rooms range from P1,500 to P4,500 – aircon and non-AC and for multiple people (3 or more).

White Haven Beach Resort. Located at the northern end of Gumasa Beach. P2,500 to P2,900 for aircon rooms good for 6-9 people. Backpacker rooms good for 2 with electric fans are P750-1,000. Not very good service according to some bloggers.

You can't eat at the above three resorts if you are not their guests. 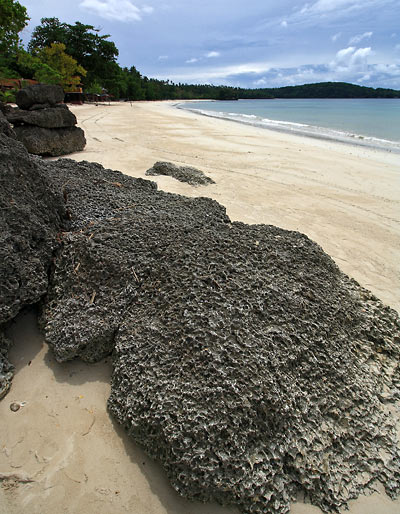 The beachfront of Rosal Beach Resort.

Brod Louie White Beach Resort. An unassuming resort tucked in Taluya Beach, it offers basic, rustic rooms at affordable prices. Aircon rooms for two are at Php 1,500 per night and service seems to be better than the resorts above. However they do not have a restaurant. If you try to eat at the other resorts on the main beach at Gumasa they will charge for entrance and force you to get a hut.

Davak Ridge Beach Resort. Like Brod Louie this resort is tucked away in the northern portion of Gumasa Beach. Fan rooms at P800, aircon rooms at P1,200. They also have cottages that can accommodate groups.

Isla Jardin del Mar. This resort lies in the quiet southwest section of Gumasa Beach that we mentioned earlier. Room rates range from P1,300 for a deluxe fan room to as high as P10,000 for a presidential suite. This resort has gotten pretty good reviews online because of their friendly staff and good food. 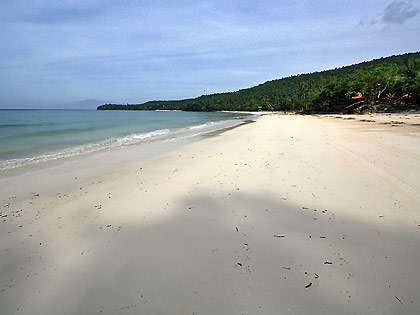 General Santos City is the usual jump-off point to Glan town and Gumasa Beach. At the terminal beside the KCC Mall (at the back of Veranza), take the van to Glan for P100 per person. The trip can be done in an hour. Upon reaching the Alegado Terminal at Glan, take a trike to the resort of your choosing at Gumasa beach (P100-120 one way). This trip normally takes just 15 minutes. Remember to book the trike for a return trip to Glan.