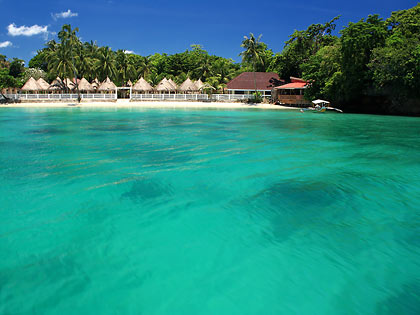 Mention Guimaras to any Filipino and the first thing that comes to his or her mind is: MANGOES! But while this island province may be famous for its sweet fruit, it also boasts several unspoiled white sand beaches, beautiful islets and marine sanctuaries. On a recent trip to Iloilo for a working conference we decided to set aside 2 days and 1 night for a side trip to Guimaras. In little more than an hour after arriving at the wharf in downtown Iloilo City, we were already resting inside a room at a beach resort in Nueva Valenca town, Guimaras. It was that near. No wonder this island is such a popular side trip for visitors in Iloilo City.

This was probably the fastest and smoothest travel we've had in years from a major city to an island destination. And that in the middle of the habagat (Southwest monsoon) season! Had we scheduled the trip a few days earlier we probably wouldn't be able to make the crossing to Guimaras so smoothly and quickly as the seas were a bit rough at that time. But here we were riding a tricycle on the main highway and enjoying the verdant rural landscape of Guimaras unfolding before our eyes.

For the past few years we have favored going to off-the-beaten-path and pristine tourist destinations not yet highly visible on the tourism radar. It was with trepidation therefore that we selected Alubihod Beach in Nueva Valencia town, knowing that this was the most popular beach in the whole island. But given a limited time schedule – our flight back to Manila was just two days away – we decided not to take a chance on other less accessible resorts (Alubihod is easily accessible by trike from Jordan wharf). We ended up at Raymen's Beach Resort, probably the most popular in Guimaras.

Part of the beach crowd on a late Sunday afternoon, Alubihod Beach.

Arriving at Alubihod, one of our worst fears was realized – or so we thought. It was a public beach alright with a good number of visitors basking in the water on a sunny Sunday afternoon. Perhaps after having gone to some of the best beaches in the country we weren't expecting much from this beach but we were surprised upon encountering it in person. Despite the crowds the beach was immaculately clean and seemed to have maintained its pristine nature. Reddish smooth pebbles mixed in with fine, creamy white sand gave the beach a rust-colored, even pinkish hue, although not as pinkish as the one we saw in Matnog's Subic Beach and Tikling Island. Visitors frolicked in the turquoise waters even as a moderate surf playfully pounded the beach front. Perimeter floaters, while somewhat distracting to photographers taking snapshots of the beach, served to keep swimmers, particularly children, from venturing too far out. It's heartwarming to realize that, given the condition of the beaches today, the island seems to have recovered from the disastrous oil spill of 2006 when a tanker went down off the southern coast of Guimaras, spilling 500,000 liters of bunker oil far and wide. 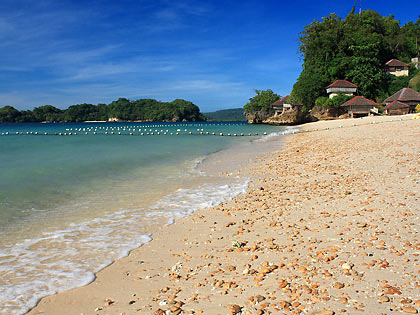 Wanting to explore a bit, we ventured into the southern extremity of the beach to the rocky area in front of and around Rico Beach Resort. We waded through waist-deep waters to get a closer view of the rocks in this area. (Rico Beach does not allow non-guests to climb the rocks adjacent to one of its guest houses to get a panoramic view of the southern end but we unsuspectingly did so with no one around to warn us.) If you want to escape the crowd in front of Raymen's this is the place to be. There is also an adjoining beach and resort on the opposite northern end of Alubihod (beyond Alobijod Cove resort) that might be possible to reach by wading around some huge rocks. However we weren't able to explore this area anymore. 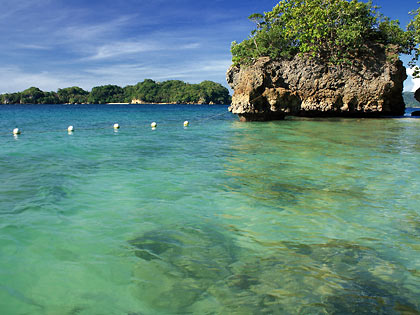 Alubihod Beach is the most popular jump-off point for island-hopping in Western Guimaras. Most of the islets are located within 15-30 minutes from Alubihod by boat and some are already visible from the beach itself. We stayed at Raymen's Beach Resort which offers clean and affordable accommodations plus a cafeteria where we had our meals but there are two other resorts here: Alobijod Cove and Rico Beach resorts. 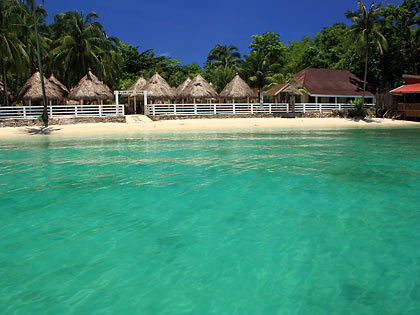 Who can travel to Guimaras and not experience what made it popular in the first place? We had our first taste of mangoes in Guimaras over dinner at Raymen's in Alubihod and kept ordering it for the rest of our stay. Most of the mangoes grown in Guimaras end up being exported – even reaching the dining tables of the White House and Buckingham Palace – so the ones we were feasting on could well be export rejects. But they still tasted marvelous, the best we've ever had with the Zambales Santa Elena variety of carabao mangos coming in a close second. And it wasn't even the mango season. 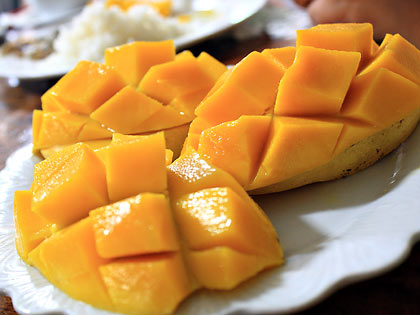 On the way to Alubihod Beach we passed by several mango plantations in the rural countryside. There is a total of 50,000 mango trees on the island in addition to other fruit trees including mangosteen. Previous attempts to grow the Guimaras mango outside the province failed to produce a similar-tasting fruit. The best one could do is to just buy the fruit from one of the stalls on the island which we did on our return trip to Iloilo while traveling on the main highway through the capital town of Jordan.

There's only so much we could cram into our tight schedule on this trip but there are several other destinations in Guimaras worth a visit. We did manage to sneak in the previously mentioned island hopping to the islets and coves at the southwestern part of Guimaras. If you've got the beach bug and more time there are a few more beaches on the main island besides Alubihod. Guisi Beach, also in Nueva Valencia town is a secluded and delightful beach hideaway featuring a wide cove of golden sand with crystal-clear turquoise waters. Besides the cliffs bordering the beach there are many interesting rock formations and a Spanish-era lighthouse on a hill that provides a magnificent panoramic view of Guisi. It is about 30 minutes away by trike from Alubihod Beach so we kept wondering to ourselves whether we should have gone ahead and visited this place after our island-hopping adventure. We also learned belatedly that there is a tiny strip of beautiful beach with a resort just 15 minutes walking distance from Alubihod that entertainment celebrities are known to frequent (Isla Margarita Resort?).

If you're shopping for mango products try the gift shop at the Trappist Monastery located in Bgy. San Miguel, Jordan. Run by monks of the Cistercian Order of the Strict Observance the monastery contains guest houses for retreats, a chapel and a gift shop where in they sell their products. These products include souvenir items, native items and processed foods such as jellies, jams, candies, pastries and piyaya made from mangoes. The entrance to the monastery is right along the main highway from Jordan to Nueva Valencia. There are also a line of stalls in Jordan town along the main highway where you can buy mangoes and mango products. 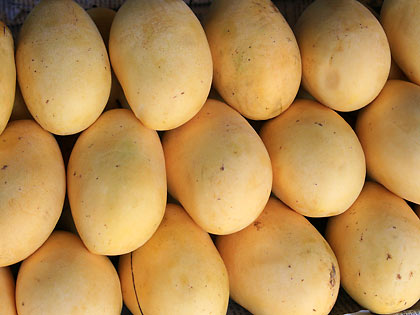 Mangoes at a fruit stall in Jordan, Guimaras.

Most tourists end up touring the southwestern portion of Guimaras which contain the aforementioned Alubihod and Guisi beaches, as well as the islets in Panay Gulf. However destinations in eastern and northern Guimaras, previously unheard of, are slowly getting their fair share of visitors. Inampulugan Island in Sibunag and a group of other islands such as Nagarao, Kamangculan, Us-usan and Nauway are on the eastern side of Guimaras facing Negros Occidental and are becoming more popular nowadays, although still relatively hidden from the tourism radar. There are resorts at Inampulugan such as Costa Aguada Island Resort which may be used as a base to tour the other islands nearby. Inampulugan itself is a wildlife haven with deer, monkeys and rare birds plus mangroves and marshes all around. Buenavista the town north of Jordan is another potential tourist destination with isolated beaches including Roca Encantada, or 'Enchanted Rock', where a summer house of the Lopez family is perched atop a giant rock. If we do return to Guimaras in the future these places, in addition to Guisi Beach, are next on our Guimaras bucket list. 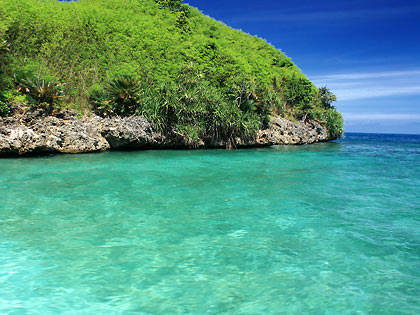 A rock islet off Guimaras.

How to Get To Guimaras; Getting Around

Once you're in Iloilo City it's a breeze to get to Guimaras. Head off to Ortiz Wharf in downtown Iloilo and catch any of the large motorized outrigger boats making regular trips to Guimaras' capital town of Jordan. Fare is P14 per person. You will arrive at Jordan Wharf, the entry point to Guimaras.

Upon arriving at Jordan Wharf we suggest you go immediately to the Guimaras Tourism Office where you log in and where the tourism people can assist you. You can get tricycles at this office at the fixed rate of P250 to Alubihod Beach (not sure about prices for other destinations). Other options for getting around are multi cabs (more expensive at P400 to Alubihod but more comfortable than trikes when traversing more rugged roads) and jeepneys. Jeepneys are the least expensive at P30 to Nueva Valencia - but the least convenient as they generally try to fill up on passengers and make frequent stops. Jeepneys also do not go all the way to resorts off the main highway so you have to take a trike after getting off them. The road to Nueva Valencia from Jordan town is concreted up to the portion before the Trappist Monastery where it turns into an asphalt road that is rough in some places. This portion was being concreted when we arrived there, however, so one can expect a smoother ride in the near future. You may want to arrange a pick-up with your trike driver for your return trip to Jordan Wharf at the same price.

Trike drivers in Guimaras double as tour guides and also offer a land tour. The land tour includes visits to Trappist Monastery, the mango plantations, Guisi Beach and Lighthouse, Roca Encantada, Balaan Bukid Shrine, and the Valle Verde View Deck. (Try the Pit Stop Restaurant and their mango pizza too.) You can negotiate with them for your itinerary. A complete day tour will cost around P1,200 or so. Since we only had a full day in Guimaras we opted for the island-hopping tour instead. 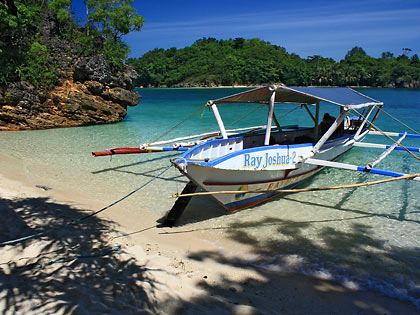 Island-hopping on a motorized outrigger in Guimaras.

Most of the well-known and therefore readily developed and accessible destinations are on the western and southwestern part of the islands – in the towns of Jordan and Nueva Valencia. You can choose to stay at one of the resorts in Jordan (such as the Zemkamps Chalet in Jordan town proper) and make it your home base or at one of the beach resorts in Nueva Valencia (at Alubihod or the more secluded Guisi Beach).