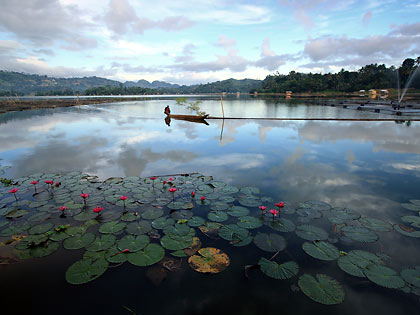 Feeling rested and energized on a cold December morning, we began the day waiting for our breakfast order at one of the huts along the lake shore. The morning sun was already up, its golden rays reflecting off the tranquil waters of the lake and revealing the magenta blossoms of lotus plants now fully awake in the morning light. Here and there white herons would glide over the waters and come to rest on the bamboo poles stretched out to mark the fish pens. A dugout canoe slowly glided along the placid waters, its skilled helmsman guiding the craft around patches of lotus plants. We could not have asked for a more ideal morning.

This is the start of a typical day in Lake Sebu, a picturesque highland town in South Cotabato. Because of its elevation (1,000 meters above sea level) and relatively cool climate, Lake Sebu has been dubbed as the "Summer Capital of Southern Mindanao." There are actually three lakes in this municipality and the biggest of the three – Lake Sebu – lends its name to the town itself. As a travel destination Lake Sebu seems to have it all – scenic lakes, majestic waterfalls, lush forests, pristine streams and the rich and unique T'boli culture. And besides enjoying the natural beauty of the place one can also choose from a number of exciting adventures. 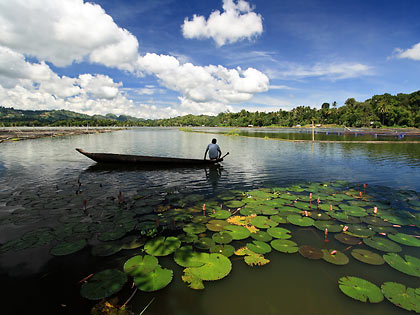 Fisherman at work with lotus plants in the foreground.

We were somewhat apprehensive about the peace and order situation in the area while planning for this trip but later found out that South Cotabato is generally peaceful. The people at Lake Sebu are friendly and accommodating and seem to know how to treat travelers and tourists intrinsically. There are a number of resorts located around the lake, affording picturesque views of Lake Sebu and a chance to go down right to the waterline. We decided on a more shoestring traveler-friendly option: Estares Lake Resort. After arriving here, unpacking our bags and taking a hearty lunch we were off to an afternoon tour of the Seven Falls. 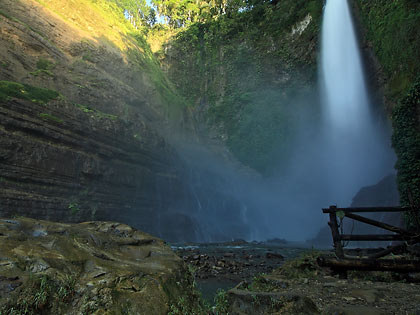 The Seven Falls of Lake Sebu are a series of waterfalls at Barangay Seloton. The falls actually feed off Lake Seloton, the second largest lake in the town. An eco-tourism park was laid out to cover the area of these waterfalls and to protect the environment. Of the seven falls, only two are readily accessible on foot. The first and most easily accessible is Hikong Alu. The second falls – accessible via a 700 plus step stairway from Hikong Alu or a ride down to its entrance via habal-habal or passenger motorbike – is Hikong Bente. Measuring 70 feet high, the latter is the tallest of the Seven Falls. The other 5 waterfalls will take long hours of hiking and climbing and so, to assist tourists, a 200 meter high zip line – the tallest in the country to date – has been set-up to give the visitor breathtaking views of all seven falls from above. 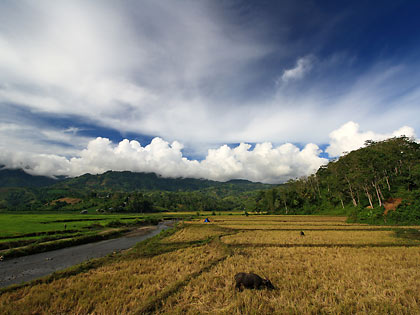 Magnificent scenery on the way to T'daan Kini Falls.

There are a number of forests around Lake Sebu that are home to smaller but no less beautiful waterfalls. One accessible cascade is the T'daan Kini Falls at Barangay Lamlahak, about 10 minutes-drive from the town proper. T'daan Kini is a two-tiered waterfall consisting of a series of small cascades. Unlike the Seven Falls which are not swimmer-friendly, T'daan Kini is more accommodating of bathers. While getting there previously required a 45-minute hike, we discovered that habal-habals can now drive up a trail to a point where the hike is reduced to 10-15 minutes. Either way the trek to T'daan Kini takes you through a stunning scenery of rice fields, verdant valleys and hills, rushing streams and lush forests. 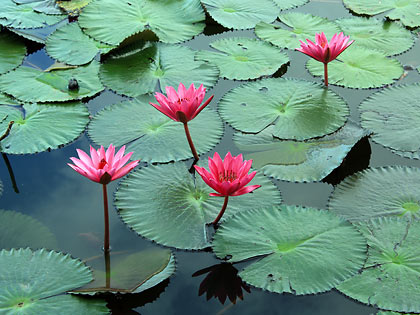 The centerpiece of Lake Sebu, the town, is of course Lake Sebu the lake. Early mornings at the lake are perfect for photography, especially when there is a slight mist that cloaks the placid waters. The lake is peppered here and there with lotus plants that are in full bloom during the morning. It's best to choose a resort where you can have a nice view of the lake during your stay. You can then go on a tour of the other resorts or even take a boat tour of the lake and its seven islets. Many of the resorts offer boat cruises. Or you can charter a boat with a local fisherman for a personal tour. 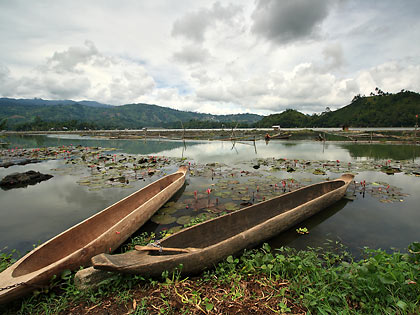 Dugout canoes and one of Lake Sebu's many changing moods.

After breakfast on our second day at Lake Sebu we started our half-day tour around the lake by habal-habal, stopping by at a few vantage points around it. Several of these vantage points are located right on the resorts, each one offering a different view and angle of the lake. (Makes sense since resort owners would naturally choose a location with a good view.) Punta Isla Lake Resort is generally considered to have the best vistas of Lake Sebu while Mountain Log Resort has a watchtower that offers a 360 degree view of the lake. The Catholic Church near the municipal hall also has a good panoramic view. The interesting thing about Lake Sebu is its ability to change photographic moods depending on the time of day, the weather and the point of view.

View of the lake from a local government office near the top of a hill. 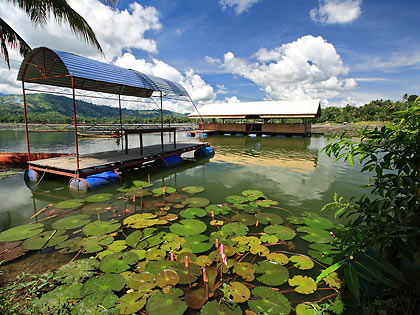 Floating restaurant in the background: at Estares Resort, Lake Sebu.

Lake Sebu is not the only lake here as mentioned earlier. Lake Seloton, the second largest of the three lakes is accessible from main road going to Surallah via a habal-habal ride. It is said to be the deepest lake among the three with a maximum depth of 200 feet. It has become known as the "Sunrise Lake" for its magnificent sunrise views. There is a resort along its shores – the Sun Rise Garden Lake Resort.

Lake Lahit, the smallest of the three lakes, is actually the first lake that will greet you as you make your way to town from Surallah. Lake Seloton and Lake Sebu itself has several fish pens but Lake Lahit has none, giving it a more pristine look. The government declared Lake Lahit as a free fishing zone, effectively banning fish pen operators from the lake. Actually Lake Sebu was much more beautiful in the years prior to the 1980s when there were hardly any fish pens around according to several old hands in town. Fishes indigenous to the lake also abounded. A multitude of fish pens raising tilapia had since sprouted reaching the point where authorities are now taking steps to curb this proliferation – even demolishing several illegal fish pens – to save the lake from further ecological damage. 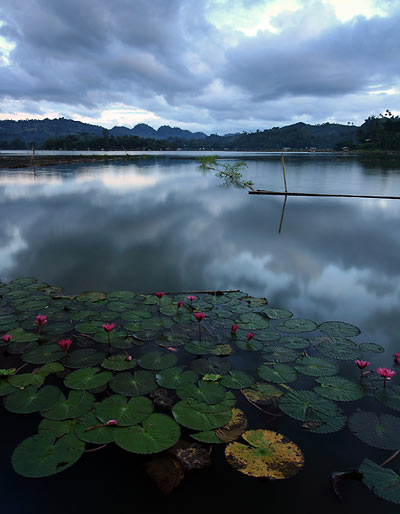 Cloudy morning at Lake Sebu – displaying yet another of the lake's many moods.

Despite the many natural wonders of Lake Sebu however, probably the most fascinating thing about the town is the cultural heritage of the T'boli, the indigenous tribe that calls Lake Sebu home. The T'boli are known for their complicated beadwork, brass ornaments, bracelets and earrings and the colorful tinalak cloth. The latter is made of intricately woven abaca fiber and has 3 primary colors – red, black and the original color of the abaca leaves. 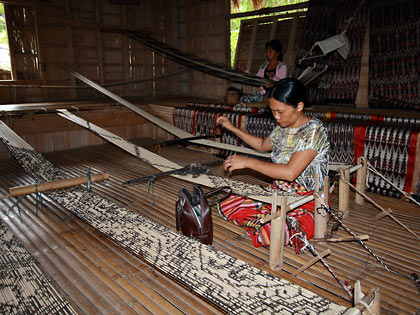 During our second day of touring we visited National Living Treasure awardee Lang Dulay at her Manlilikha ng Bayan Center where she trains younger T'boli women in the art of tinalak weaving. An adept weaver of tinalak cloth, Lang Dulay comes from a rare breed of weavers who derive their tinalak designs from their dreams, hence the monicker "dreamweaver." Besides her exceptional work with tinalak, another interesting thing about Lang Dulay is her almost wrinkle-free skin – at the age of 97. She was also pretty agile for her age, able to quickly and easily climb the stairs to her center. Her secret? She eats mostly vegetables and the occasional native chicken, her interpreter told us.

We did not get to visit the small but interesting T'boli Museum or the School of Indigenous Knowledge and Tradition (SIKAT Cultural Center) at Barangay Lambanig where you can see T'boli elders educate their young ones in T'boli native dance and art. We also learned that it is possible to observe T'bolis in native garb performing traditional music and dance at the Punta Isla Lake Resort.

Getting There and Around

At Marbel there are vans that can take you directly to Lake Sebu for a 1.5 hour-long trip. We got a (non-aircon) van for P63 (2014) and our very capable driver made it in a little over an hour. (Air con vans will probably cost P85 according to resort people at Lake Sebu.) Vans that go directly to Lake Sebu from Marbel may not always be available when you arrive here or might take a while to fill up with passengers. An option is to take a Surallah bound van or bus at Marbel, travel time is around half an hour and the fare is P24-30. At Surallah Terminal there are jeepneys going to Lake Sebu, a forty-five minute to an hour-long journey for a fare of P36.50 with the last trip usually at six in the evening – or you may take a van plying the same route for P50. 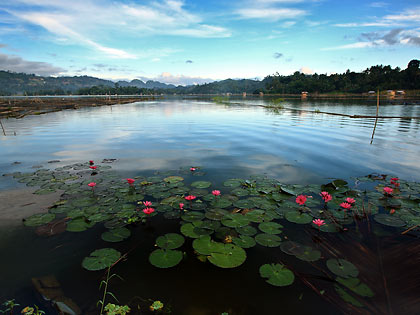 Habal-habals or motorbikes are the main mode of transportation around Lake Sebu, the minimum fare being P8-10. We were wondering why there were practically no trikes around and were told that the steep gradients of the roads made it impossible for trikes to bring people around. Habal-habal drivers can take you around for a half-day or full-day tour; those registered with the Department of Tourism will double as guides. A normal full-day tour will cost P300 per person (P150 for a half-day tour), two people to a motorbike. Since we felt some of the bikes were too small to take the two of us plus the driver, we opted to get a habal-habal each, paying the equivalent of two people for one and costing us P300 each for just a half-day tour.

You may contact Jhung, our driver and tour guide, for a day tour around Lake Sebu including the Seven Falls tour at 0926-2137488. Jhung took us around the place for two consecutive days and insisted we go to T'daan Kini Falls – a trip we had already thought about cancelling, fearing a long hike. As it turned out it was a good thing we listened to him as that trip was one of our highlights at Lake Sebu.