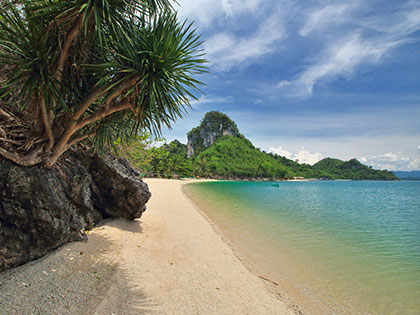 Leo's mom had been going with friends to Unisan in the Bondoc Peninsula, Quezon province, for some time and we've often wondered what attracted them to the place. Until then we haven't heard about an attractive tourist destination in the area. But when pictures of white sand beaches and quaint tropical islands lying just off the coast in Padre Burgos in the same Bondoc Peninsula started popping up on the blogosphere, we decided it was time for a visit ourselves. 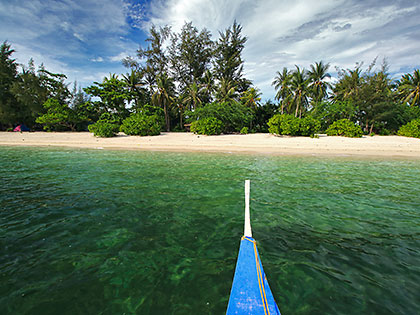 Padre Burgos boasts of several white, sandy beaches just a few minutes away by boat. This is a beach on Dampalitan Island.

It was late in October 2011 and still very much within the typhoon season when we made our first trip to Padre Burgos with a few young friends. But there was a break in the weather and although cloudy at times, the skies were generally fair when we came. Our second visit would come almost 5 years later during just about the start of the rainy season. 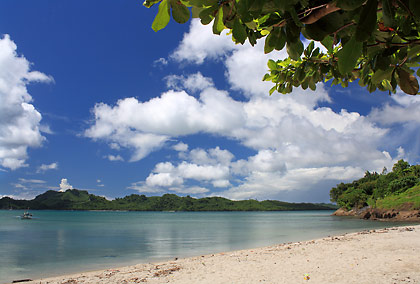 A view of Lipata Island from the beach front of the Tamarind Tree Resort. The beach front was our boat's jumping-off point to other beach destinations in the area.

One of the nice things about Padre Burgos is its distance from Manila: it's a leisurely 4 to 4.5-hour drive in non-rush hour traffic. The town itself is small and laid-back and has not yet been exploited that much for commercial tourism. We chose to stay at the Tamarind Tree Resort in Barangay Basiao which is just off the national road and has a beach front with a nice view of Lipata Island. It is one of only two resorts in Padre Burgos as of this writing. The resort has some huts close to the beach front and a few more on a hill near their second entrance. We thought their prices were a little too high but later thought that it was probably due to the cost of maintaining the resort with relatively few visitors the year round, although that seems to be changing for the last two years. 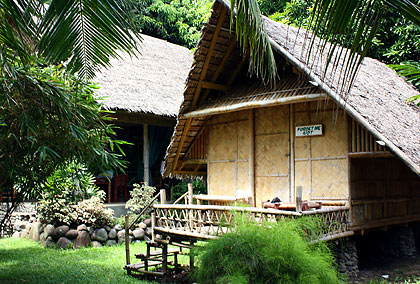 One of the beach-front cottages at the Tamarind Tree Resort.

During our first visit it was already late morning when we got into the Tamarind Tree Resort and we immediately took their boat rental package to Dampalitan Island, Borawan Beach and Puting Buhangin in Pagbilao. We could have actually taken the cheaper option of renting a boat at the Aplaya, a small port near the town center but I've read somewhere that some of the boats there do not provide life vests. We carried packed lunch aboard our boat since our island destinations won't be able to provide that. This we got from an eatery along the main road outside the resort. (Today a canteen on Borawan serves meals for visitors although their menu is a bit limited.) During our recent visit we were staying at Nina's aunt and uncle at Tiaong, just about 2 hours away, so we went for a day trip without the need for a resort. The boat we rented for our island-hopping was docked at the small port near the Tamarind Resort. 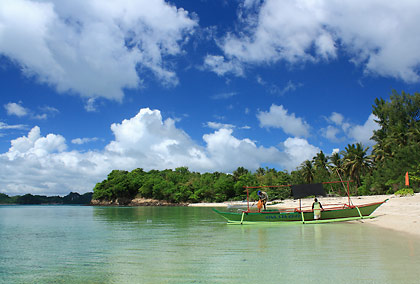 Our outrigger boat docked on the beach at Dampalitan Island.

Dampalitan Island is just 10 - 15 minutes away from the port at Basiao. From afar the beach on Dampalitan looks really inviting with its creamy white sand and crystal-clear tropical waters set against a backdrop of coconut palms and evergreen trees. The latter (called agoho trees in the native dialect) were reminiscent of Anawangin and Nagsasa Coves in Zambales. Visitors can relax and take lunch under the cool shade of the verdant coconut palms and agoho trees. 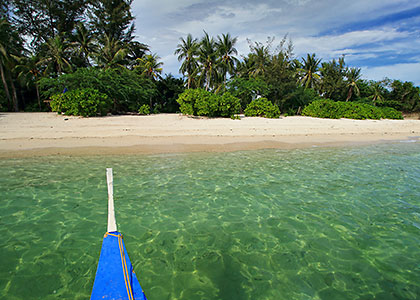 The beach in Dampalitan is not outstandingly beautiful but it is nice and laid-back and offers a peaceful retreat from the crowded beaches of overdeveloped tourist spots such as Boracay. During our first visit here we swam and snorkeled within an area protected by netting to keep jellyfish out (Leo absent-mindedly left the protective covering of this net to take pictures of the beach and instantly got stung by what probably was a deadly box jellyfish that left a long, painful mark on his leg.) Snorkeling is not outstanding here with only a few fishes visible. A lot of the corals have unfortunately been destroyed by illegal fishing. Dampalitan is really more for swimming and just lazing around. 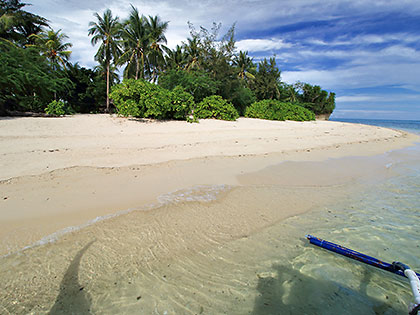 The mangrove area is just around that bend on the right.

We also took a stroll around the island and observed a cove lined with mangrove trees to the right of the main beach where our boat had docked. The cove is covered with pebbles and to get a proper swim one has to move out from shore several meters more, but it was a beautiful subject for photography. Beyond the cove lies an even longer stretch of beach. 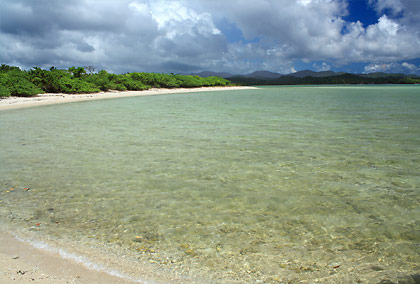 The mangrove area during high tide at Dampalitan Island.

Borawan was our last destination on our first visit (it was, however, our first stop on our second visit). Borawan Beach is in Lipata Island (named Pagbilao Chica Island in Google Maps), also a part of Padre Burgos. It is a stretch of beige, sandy beach on Lipata dominated by towering karst or limestone formations. Incidentally, there are several other beaches in Lipata Island. Several native huts with docked fishing boats on these beaches attest to the fact that the island is inhabited, albeit sparsely. 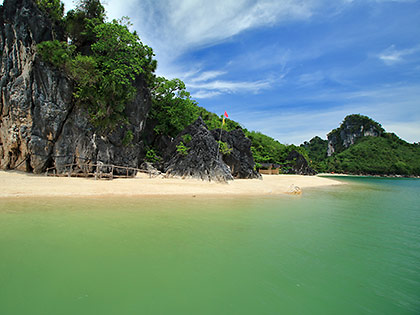 The beach waters around Borawan are not as clear as in Dampalitan and during our first visit here our young companions declined to swim there. During our trip there this year, however, this beach was full of visitors enjoying their time in the water. There were also more huts, a canteen and a sari-sari store, kayaks for rent and tents for overnight visitors. It seems that word about Borawan has spread far and wide since our 2011 visit. 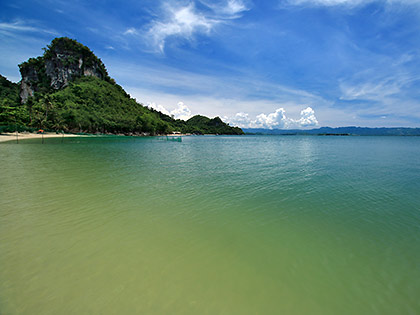 We again skipped swimming at the now-crowded central section of Borawan during our recent visit (we would take to the water instead at Pagbilao's Puting Buhangin Beach). Rather, we decided to explore the island on foot, especially the practically deserted northern section which was actually more attractive-looking than the central part where most of the huts, the canteen and most visitors were. We were particularly intrigued by the towering limestone rock formations that Borawan is known for. Although there had been many forays made into Borawan by climbers sometime back, rock climbing is now prohibited in this part of the island. 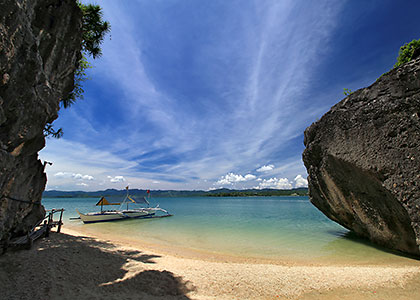 The central section of the beach at Borawan.

The small fish port at Barangay Basiao in Padre Burgos is perhaps the best way to access Borawan and Dampalitan Beach. Motorized outriggers capable of sitting 10-15 people may be rented to take you to both destinations as well as to Puting Buhangin Beach/Kwebang Lampas on Pagbilao Grande Island for P1,700-1,800.

Getting to Padre Burgos

By private vehicle
If you're coming from Manila, take the South Luzon Expressway and exit through Santo Tomas bound for Lucena City. You'll pass by San Pablo City, Laguna then Tiaong, Candelaria and Sariaya in that order. At Sariaya the main road forks to Tayabas and Lucena City. Take the latter. A few kilometers before Lucena City proper, take the Lucena Diversion Road towards Pagbilao. (Tip: Follow the signs to Bicol until you reach Pagbilao.) Follow along this road until you reach another fork leading to Bicol on the left and to Padre Burgos on the right just after the TESDA school. The road to Padre Burgos is marked by an arch that says "Welcome to Bondoc Peninsula." From this welcome arch it is just 15 - 20 minutes of driving through a scenic, winding road before you reach the town proper of Padre Burgos.

By public transport
Take the bus to Lucena City a nd get off at the Lucena Grand Terminal. (We took the JAC bus at their Kamias terminal along EDSA.) Travel time is about 3 hours. At the terminal take another bus going to Unisan, a jeepney bound for Agdangan or a van to Unisan. (You can also take the jeepney going to Padre Burgos at the SM Lucena terminal.) 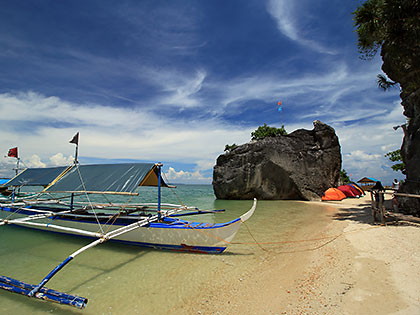 As we mentioned earlier there are just two resorts in Padre Burgos as of this writing. The Tamarind Tree Resort where we stayed is situated almost at the town proper. To reach it look for a white house along the main road just before the QCRB bank at the town proper. Make a right on the road going uphill just after the white house and continue along this road until you see the entrance to the Tamarind Tree Resort. If you're taking public transportation tell the driver to drop you off at the tricycle terminal just after the QCRB bank in the town proper. You can then take a tricycle to the resort.

The other resort, Villa Anita, is at Km 174 Barangay Cabuyao, Padre Burgos. It's along the national highway, 10 minutes further south from Padre Burgos town proper. While it doesn't have a beachfront like Tamarind Tree the room rates and food are all cheaper and the huts are nicer. The room rates also include breakfast. (Toilets are communal.) It is a bit farther away from the jump-off point at Barangay Basiao or the Aplaya though.