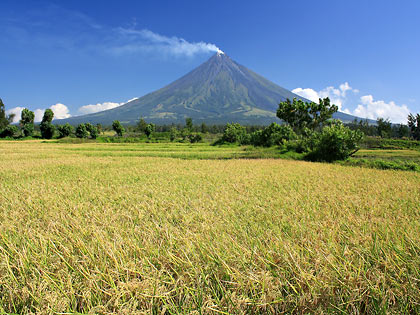 As our plane was swooping in to land at Legazpi's airport we were straining our necks, trying to catch a good view of the volcano we had been seeing for decades on postcards, on travel books and even on grade school social science text books. Alas a band of clouds hid most of the upper half of Mayon – a sight that would not change as we walked away from our parked plane towards the airport terminal. It would remain that way even as we left Legazpi City that same day for the port town of Matnog, Sorsogon and its beaches. 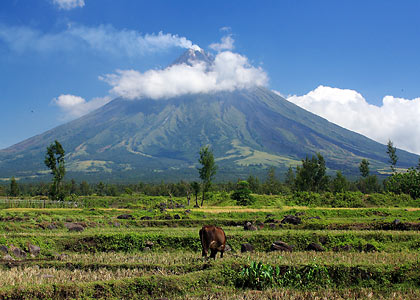 Our amazing two days of travel to Sorsogon's Subic Beach, Tikling Island, Juag Lagoon and Bulusan Lake would somehow mask our disappointment in not seeing Mayon Volcano in all its glory. But we were headed back to Legazpi a day before our return flight to Manila and had another opportunity for a "cleaner" look at the famous volcano. And so, on the morning of our last day in Bicolandia, we were headed for the Cagsawa Ruins in Daraga, Albay, a town next to Legazpi City and probably the most famous tourist destination in Albay.

Our timing was perfect this time. Just beyond the ruins of the Cagsawa Church and its still-standing belfry was the unmistakable, almost-perfect cone shape of Mayon set against the backdrop of a clear blue sky. Lush fields of ripened rice stalks just beyond the church ruins added their golden colors to the tranquil beauty before our eyes. Finally, after decades of seeing Mayon only in pictures, we had an unobstructed view of the famous volcano in person. 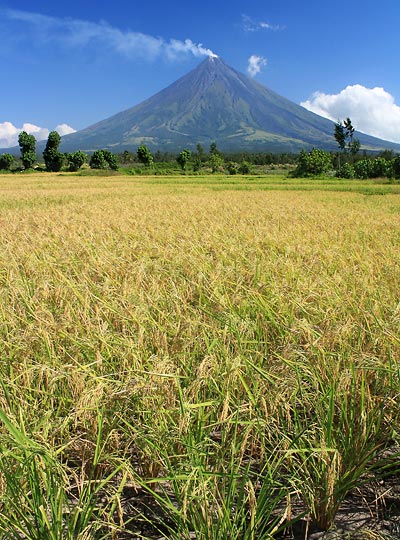 Ready for harvest: ripened stalks at a rice field with Mayon volcano in the background.

Mayon is perhaps the most active volcano in the Philippines (49 eruptions in the last 400 years). Its still-smoking top on this particular day bears testimony to that. It might be silent for the time being but Mayon has had its share of destructive eruptions, including a major one in 1814 that killed 2,200 people and buried the town of Cagsawa in ash. Several people reportedly sought refuge inside the Cagsawa Church during that eruption but were trapped inside by the resulting pyroclastic flow. The church facade actually stood for a time until brought down by an earthquake in the 1950s leaving only the famous belfry and some parts of the convent still standing. 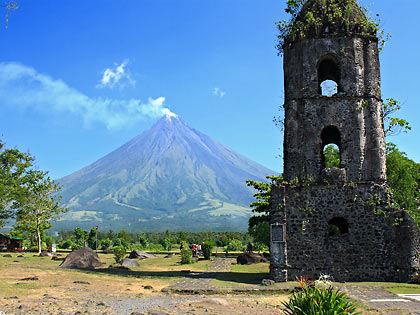 The Cagsawa Ruins are currently part of the Cagsawa Ruins Park and is currently overseen by the municipality of Daraga. In the 1990s they added the Cagsawa National Museum which contains photos of Mayon's eruptions and geological and archaeological exhibits. As with other popular tourist destinations, the park has its share of souvenir shops and stalls selling food and refreshments. We also saw several tourists posing for pictures pretending they were lifting the volcano and other trick shots involving camera point-of-views – stuff we've seen in social media sites before. What grabbed out attention though were the ATV (all-terrain vehicle) rides and the sili (chili pepper) fruit shakes sold at some stalls. The ATV rides can take you to the foot of Mayon through rocky trails fringed by lush vegetation and costs anywhere from P600 to P1,800. We opted instead for the less adventurous (and less costly) sili guyabano (soursop) with matamis na bao and sili mango shake.

Mayon behaves like a shy lass at times, hiding her face behind a cover of clouds as if to deny her beauty to the beholder. She behaved this way when we first landed in Legazpi. Not more than an hour after arriving in Cagsawa this demureness was on exhibit again as a cover of white cumulus clouds hid Mayon's famous cone. We decided to leave her this way – thankful at least that we were able to view her in full splendor for several precious minutes but ever mindful that her reticence can just as easily turn to fury. The ruins of a once-proud religious edifice offer a silent but solid proof of that demeanor.

The Cagsawa Ruins are located in Barangay Busay, Daraga and are about 8 kilometers away from Legazpi City's central business district. If you're coming from Legazpi City take a jeepney going to Camalig, Guinobatan and/or Ligao (approximately a 30-minute ride). Ask the driver to drop you off at the road going to Cagsawa. There is a signage at this point. Some visitors opt to walk the 500 meters of road to the ruins from this point but since this day was particularly hot we chose to ride one of the tricycles waiting at the junction.

Visit our Flickr page for more pictures of Mayon volcano.

Just as volcanic as Mayon are the spicy foods that are essential to Bicolano cuisine. We've had Bicolano food for years but our 4-day visit, including our overnight stay at Legazpi, enabled us to sample Bicolano cuisine much closer to its home.

Spicy foods characterize much of Bicolano cooking and they also use coconut cream a great deal in their recipes. We love both and were really looking forward to sampling more Bicol dishes. Probably the most famous is the Bicol Express, so named after the passenger train plying between Manila and Bicolandia in times past. This dish is supposed to make you whistle like a train or run as fast as one for water because of its hot and spicy flavor. Essentially it is pork belly cooked in coconut milk and saturated with hot chili peppers. Leo's nephew Raffy had Bicol Express for most of his meals in Sorsogon; most of these were served not at fancy restaurants (there were practically none in Matnog and Bulusan) but at the ubiquitous carinderia or turo-turo. 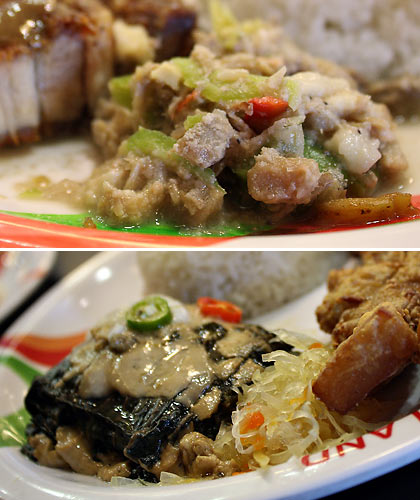 Pinangat or laing is another popular Bicolano dish made from shredded dried gabi or taro leaves simmered in rich coconut cream and served with hot chili peppers. Ground meat or seafood are often used as fillings. In Matnog we've also had the kinunot na pagi or sting ray cooked in coconut milk with malunggay leaves and chili peppers. We've been having both dishes in restaurants and stalls in other parts of the country but the Bicolanos are masters when it comes to these type of dishes.

A pleasant surprise in Legazpi was a mini-buko or coconut pie version that was being served by what looked like the original branch of a stall that serves coconut drinks and shakes in Metro Manila malls. We had initially wanted to try the sili (chili pepper) ice cream at a Legazpi mall but wanting something more appropriate to go with coffee we went with the buko pie. It turned out to be the best-tasting buko pie we've ever had, probably even better than the original buko pie at Los Baños, Laguna. 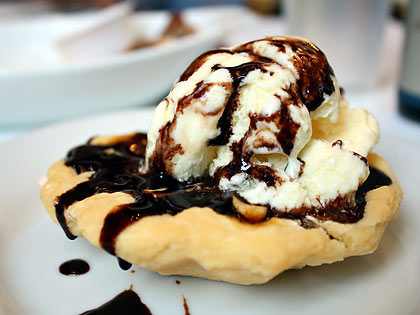 When it comes to desserts, Bicol has its unique pili nuts. For the most part we've had the sweetened/caramelized version of this nut at various times during this trip but also had the chance to try out a pili pie a la mode at a café in downtown Legazpi to go with our coffee for the morning. More than any Bicol food product, pili nuts are the first choice as pasalubongs to friends and love ones in the Metro.

Four days and three nights are not enough, for sure, to try out more unique culinary treats that this region has to offer. We are looking to return to Bicol sometime soon to try out more of its travel destinations and culinary surprises.