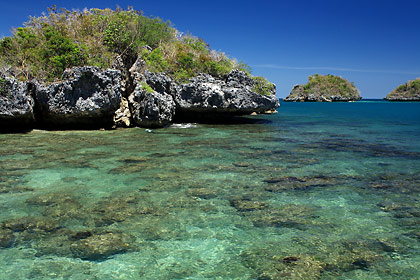 Two things make the Hundred Islands National Park in Alaminos, Pangasinan such a popular place to visit. One is its accessibility from Manila and from most major cities in western and northern Luzon. The other is its prominent appearance in travel books, postcards and even social science textbooks in the Philippines. When we did get to finally visit the Hundred Islands in the mid-1990's, it was somewhat of a disappointment. The place was overcrowded with visitors, some of the islands were unkempt and the corals were dead and practically denuded of fish. But because of its accessibility we kept returning to the place for team getaways and recreation. In the last few years however, we felt the Hundred Islands was experiencing something of a renaissance. 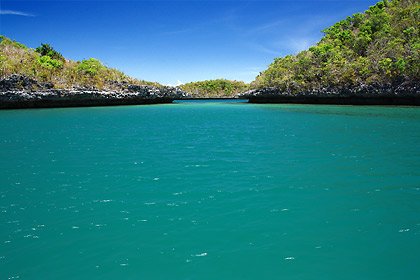 123 limestone islets make up the Hundred Islands National Park. At low tide one can even travel from one islet to another on foot.

Consisting of 123 limestone islands just off the wharf at Lucap in Alaminos, Pangasinan, the Hundred Islands is easily negotiated by outrigger boat. During our first three trips to the place we would sail to one island, pitch camp, swim, and basically laze away the day until it was time to leave. On our last trip this year with some friends (2011) we decided to tour the whole place. However the waves were a bit rough in some areas (unusual for this time of the year), so we couldn't go to as many places as we would have liked to. And then there were some islands where the boat couldn't dock at all and we just had to admire them from the boat. One of the pleasant discoveries we made during our last two visits to the Hundred Islands was the regeneration of underwater marine life. Some corals were springing back to life along with reef fishes and even giant clams (courtesy of the University of the Philippines' research institute in Bolinao). The place also looked cleaner than in previous years, regaining more of the beauty it had in the past. 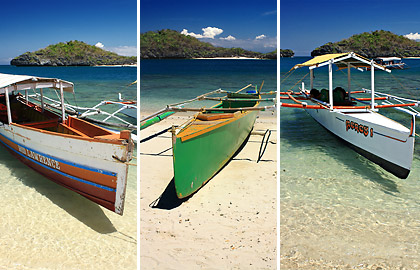 Travel to the Hundred Islands is just 20 minutes by motorized outrigger boat from Lucap wharf, three of which are shown here docked at Quezon Island.

Quezon Island is the most developed of the Hundred Islands and has two covered dining areas as well as several nipa huts. There is a snorkeling area bridged over by a wooden walkway that leads to a rocky outcrop. A variety of marine life including parrot fishes, Moorish idols, butterfly and angel fishes may be observed. Folks said that giant clams may be observed in the area to the left of the walkway in the picture below but as the waves were pretty strong on that side so we decided against snorkeling there. (There is an enclosed area for young giant clams that are easily visible in the beach fronting the entrance to the island.) The snorkeling isn't as great compared to places like Puerto Gallera and Coron in Palawan but considering how these islands have suffered from destructive fishing practices in the past, the re-emergence of the corals and reef fishes are heart-warming. It's also possible to rent a kayak at Quezon Island and paddle to the nearby islands. 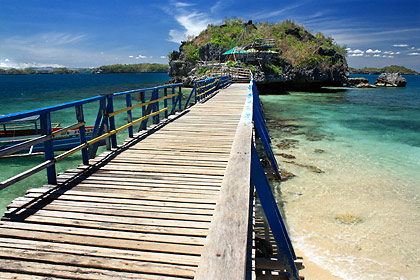 Wooden walkway on Quezon Island. The snorkeling area is to the left and right of the walkway. 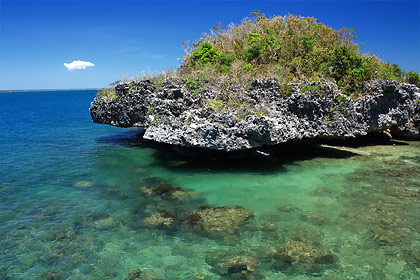 One of the rocky outcrops located near Quezon Island.

Governors Island is the largest of the Hundred Islands and now boasts the Pinoy Big Brother house than can accommodate up to 10 people. Climb up the steps to the view deck to get a sweeping view of the park from the highest elevation among all the islands here. A cove on the side opposite the docking area is ideal for swimming. Governor's Island also has a small cave that can be seen on the way down from the view deck. 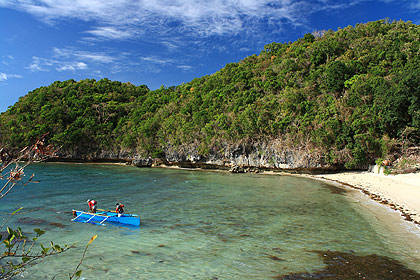 Governor's Island is the largest of the Hundred Islands.

Children's Island is suitable for family get-togethers and the beaches around are shallow and children-friendly (hence the name). One can even walk the distance to a nearby islet at low tide without having to swim. This was the first island we set foot on at the Hundred Islands during our first visit in 1994. A friend who accompanied our group was stung by a jellyfish at the islet from across Children's Island and served to remind us that jellyfish roam these waters in summer. 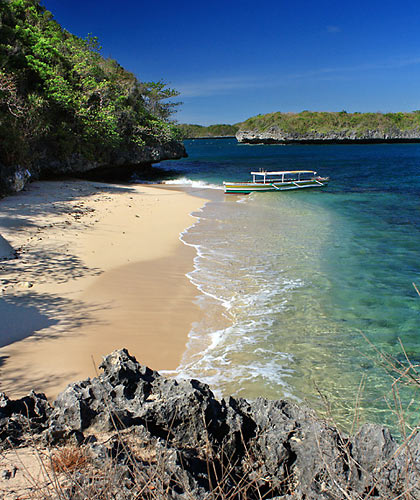 Not all the islands or islets have sandy beaches. Marcos Island is one of those that have and also has the Imelda Cave, a twin-chambered, cathedral-shaped cave. There is a pool of blue-green water 70 feet below which can also be approached from the other side of the island by kayak or a daring swim. Swifts and bats make their home in the cave chambers, adding to the surrealism of the place. The Imelda Cave is accessible via a short trail from the beach that also offers vantage points for viewing Marcos and other outlying islands.

Bat Island is home to – you guess it – numerous bats resting among the trees and rocks during the day. It's not possible to dock at this island as it does not have a sandy beach so we just admired the scene from the boat. Cathedral Island is another place where boats cannot dock but has a cathedral-shaped cave.

We had to brave rough waters to get to Lopez Island, an islet with a sandy beach and easily visible from Quezon Island. Part of the waters leading to Lopez Island is practically open sea, hence the strong waves. This was another island where we stayed with our old international team in 2003 when we were still based in Baguio. The waters around Lopez Island contain corals that were slowly regenerating and there was a number of reef fishes. But in our 2011 visit we couldn't snorkel due to the strong waves so we contented ourselves with just dipping in the shallow waters and lazing around in the sand. 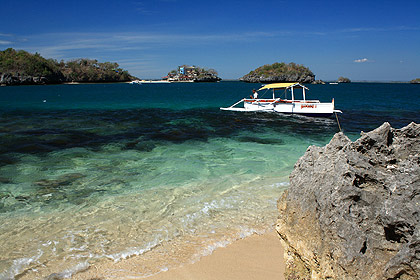 Strong waves pounding the beach and coral rocks at Lopez Island. Otherwise, the waters around this island would have been ideal for snorkeling.

Cuenco Cave in Cuenco Island is another of the numerous caves in the Hundred Islands National Park. The island itself is located in a cove formed by a group of small islands and has white sandy beaches on two sides. Cuenco Cave starts on the beach where boats dock, runs through the middle of the island and opens into another sandy beach on the opposite side of the island. The cave itself is easy to explore and offers a view of interesting limestone formations. 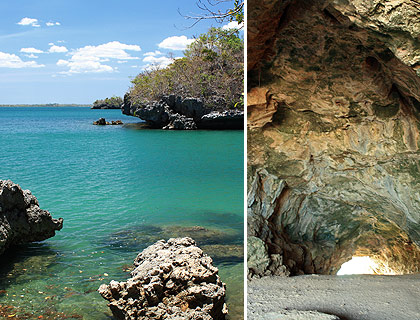 Right: Cuenco Cave runs the width of the island and opens to another beach on the opposite side (left photo).

There are other islands and caves in the park that we weren't able to visit. The rough waves in some portions of the park that made it too dangerous and the low tide also made it difficult to navigate others. We were hoping to visit Shell Island and Virgin Island but our boatmen (hopefully they were telling the truth) said it was impossible at that time of the day and year to dock at those places. 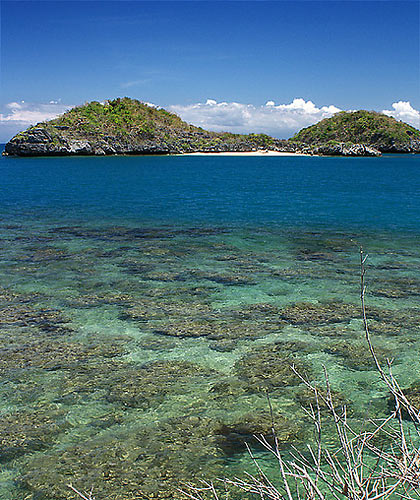 Getting There and Other Tips:

As we've said before the Hundred Islands National Park is easily accessible from Manila. Alaminos, the city that serves as the base for touring the islands is just a four to five hour drive from Manila. To get there from Manila, drive along the whole length of the North Luzon Expressway or NLEX, then take the Subic-Clark-Tarlac Expressway (SCTEX) towards Tarlac City. At Tarlac City take the road going to Camiling (it's hard to describe here so just ask around in Tarlac for directions). Drive all the way to Alaminos from Camiling; you'll pass the towns of Mangatarem, Bugallon, Labrador and Sual. At Alaminos town proper look for the road near the town plaza that goes to Lucap Wharf. Lucap is just a 10 minute drive from the town proper of Alaminos.

There are numerous resorts in the area around Lucap Wharf should you decide to stay overnight at that place (there are also lodgings at the Hundred Islands – in Quezon and Governor Islands in particular). The islands may be reached by motorized outrigger boats at the wharf. A Department of Tourism desk arranges for all the boat rentals and all rates are published at the desk. You could go all over the Hundred Islands and choose the islands you wish to visit. Bring your own snorkeling gear; the rental fees for snorkels and masks are pretty exorbitant. Life vests are standard for all the boats.