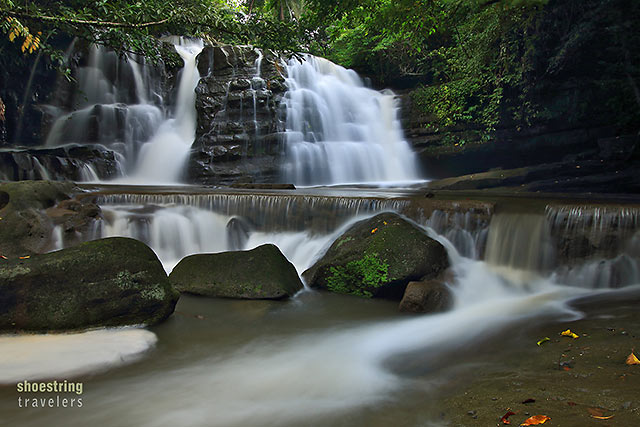 In recent years the town of Mauban in Quezon province has become synonymous with Cagbalete Island, its most popular tourist destination, no doubt. However, this sleepy coastal town is also home to caves, forests and numerous waterfalls. Locals say that there are more than 20 waterfalls in the area, however, only three are accessible for the moment. 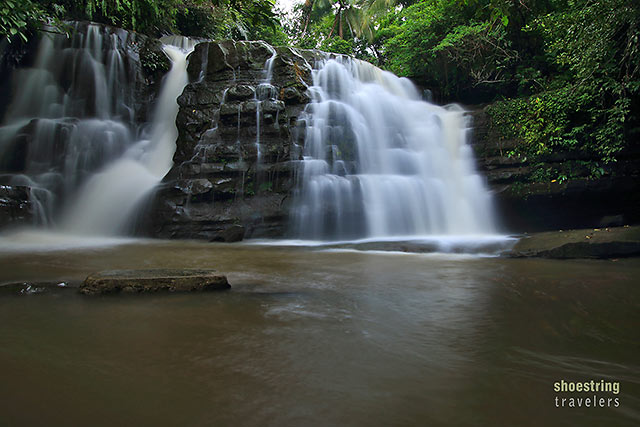 The most popular of Mauban's cascades – and its most accessible – is Dahoyhoy Falls in Barangay Macasin. The jump-off point is a short distance from the main highway out of Mauban town. This waterfall is a 30-minute trek over a residential area and rice fields. Surprisingly the pathway is cemented over practically its entire length. We think this is really a walkway paved for Barangay Macasin's residents. It just so happened that the trek to Dahoyhoy also goes over the same path. 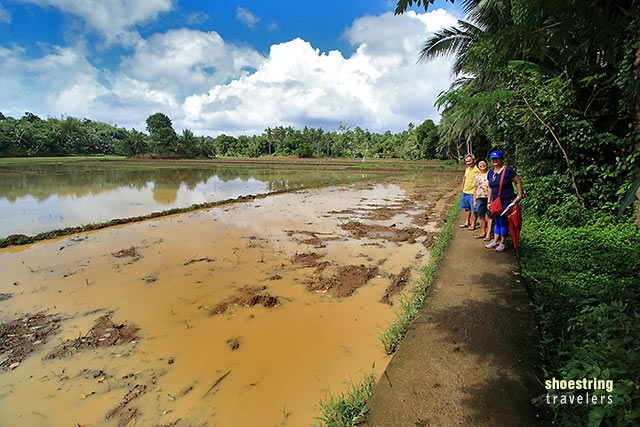 Practically the entire path towards Dahoyhoy Falls is cemented

Our hike to Dahoyhoy took place on a November Monday – during the off-season for tourism. This meant very few visitors but it also meant a high possibility of rain. Consequently we were the only visitors to Dahoyhoy Falls that morning. The rains caused by the habagat season also meant the volume of water flow would be at its maximum, making it the best time to view the falls. 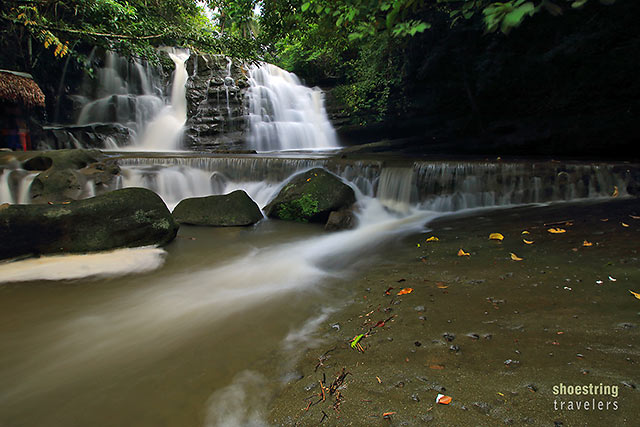 The trek is quite scenic, passing through tranquil farm scenery and over picturesque rivers (we crossed at least 3 foot bridges including 2 hanging bridges). It was raining on and off during the trek but the cemented walkway ensured that we wouldn't be wallowing in mud. We were also able to shelter in some of the sheds and houses along the way when the rains got too strong. It's difficult to get lost going to Dahoyhoy Falls with signage along the way. 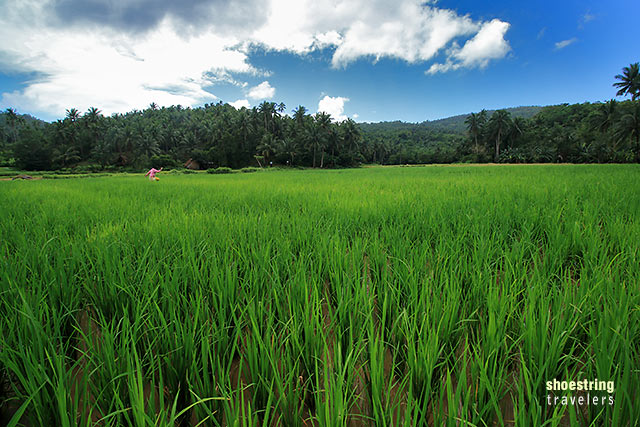 Scenic farm view on the way to Dahoyhoy Falls

The falls itself is not tall – probably not more than 20 feet – but it is spread out and flows over layers of what appears to be horizontal slabs of rock. The catch basin has been dammed in to create a swimming pool but with the copious amounts of flowing water on this day swimming was out of the question. Rocks spread out around the catch basin and along the stream below the falls add to the beauty of Dahoyhoy. 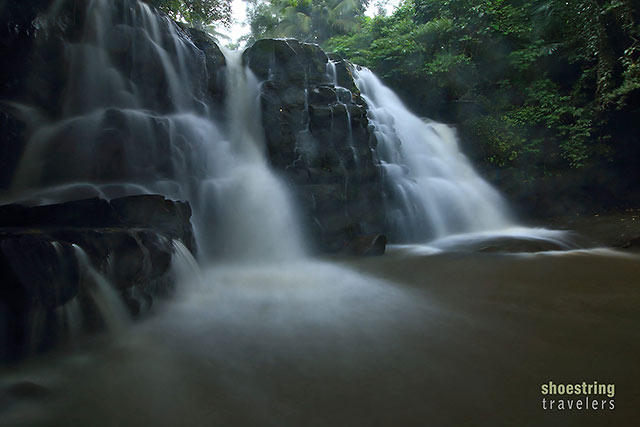 Rain starts to fall again: there are covered stone picnic tables here where we sheltered
during the rain

The waterfall has been developed for tourism to a certain degree, but whatever the locals did here blended well into the environment including the walls around the catch basin. There are huge trees around the falls that would provide a good shade come summer. Native huts and stone picnic tables provide some accommodation for visitors.

We would have gone on to Hagdan-hagdan Falls – another readily accessible waterfall in Mauban – had it not been for the rains on this day. As its name suggests, Hagdan-hagdan is a series of short, descending cascades across the whole width of the Balaybalay River. During the rainy season and particularly during the southwest monsoon (habagat), the rains would have made the trek muddy and even a bit dangerous as it involves crossing a fast-moving stream on the way. The trek during more a more favorable time is apparently not difficult and takes less than an hour. 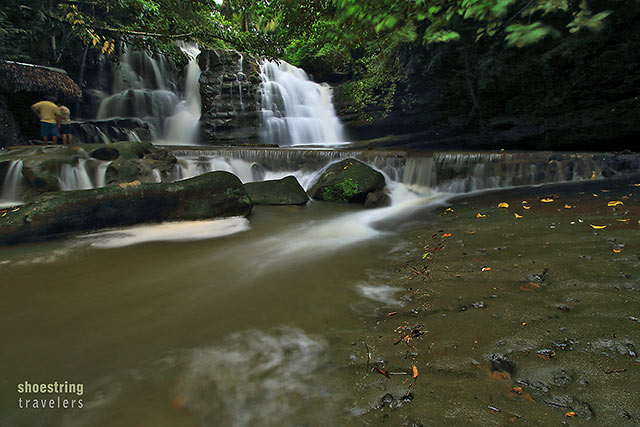 The last accessible waterfall in Mauban is Alitap Falls. This is without question the most laborious waterfall to negotiate among the three mentioned here. It involves a boat ride along a river, a motorcycle (habal-habal) ride and a trek on foot that is longer than the hike for the two previous waterfalls. But once you make it to Alitap Falls you will be rewarded by arguably the most beautiful of all the three. And Alitap Falls is not just one but a series of seven falls with the best-looking falls reachable by hiking up a hillside.

By public transportation: If commuting, catch a bus for Mauban. You can take a JAC Liner Mauban-bound bus at their Kamias terminal in Cubao or at their Buendia terminal in Pasay. Travel time is about 5 hours. If you miss these trips you can ride a bus going to Lucena then ride another bus or van at the Lucena Grand Terminal to take you to Mauban. 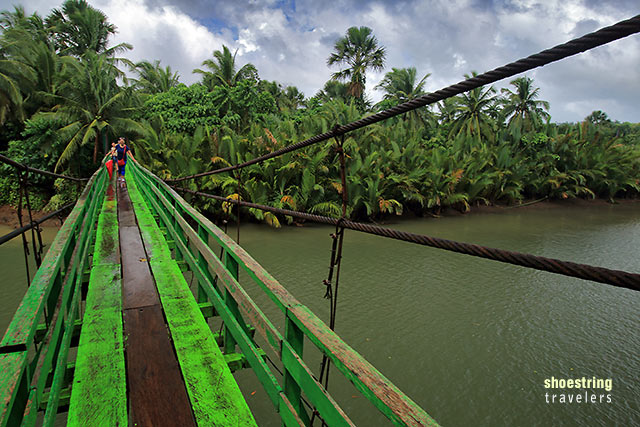 At the town proper ride a trike to the jump-off point to Dahoyhoy Falls in Bgy. Macasin. The trike will bring you to an interior road off the main highway a few kilometers from the town center then drop you off near a basketball court. This is the start of the trek – the first footbridge is visible from this point.

By private vehicle: Head towards Mauban. There are two main routes going there if you're coming from Metro Manila; we chose the route that goes through Tayabas. On the way to Mauban on the Tayabas-Mauban highway look for that interior road that goes to the jump-off point for a trek to Dahoyhoy. This road is a little hard to spot going towards Mauban and there are practically no landmarks. Ask around for the way going to Dahoyhoy Falls so that you don't overshoot this road. Drive along this road until you reach the dead end where there is a basketball court and where you can park your car for P50. This is the jump-off point for the trek to Dahoyhoy.

As mentioned earlier the hike to Dahoyhoy is over cemented pathways for practically the entire length. You'll also cross two hanging bridges and a foot bridge. You won't need any guide as there are signage at critical points showing the way to Dahoyhoy Falls.