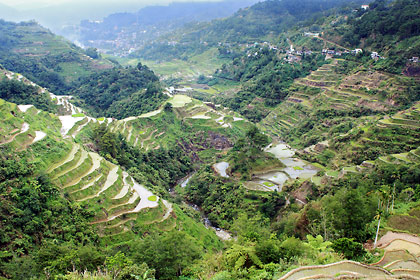 To most foreigners a typical Philippine landscape includes sun, sand and sea. This is true for the most part and then there are places such as the Cordillera region of northern Luzon with its cool climate, mountainous terrain and landlocked geography. (It is the only landlocked region in the country.) Nestled among the Cordillera mountains, the region has its share of spectacular sceneries. 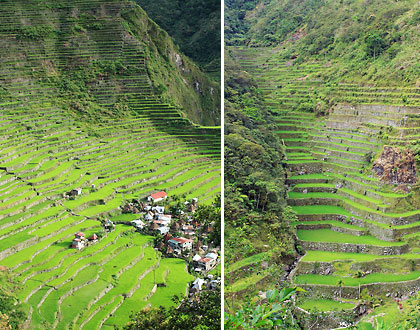 The most famous are the rice terraces centered around the town of Banaue in Ifugao. Although there are many other rice terraces in the provinces of Kalinga, Apayao, Benguet and Mountain Province only five have been classified as UNESCO World Heritage Sites. These are all in Ifugao namely the rice terraces of Batad, Bangaan, Hungduan, Mayoyao and Nagacadan. Curiously, the rice terraces in Banaue town proper are not part of the list of five. What makes these 2,000 year old terraces all the more remarkable is that they are still very much in use today. 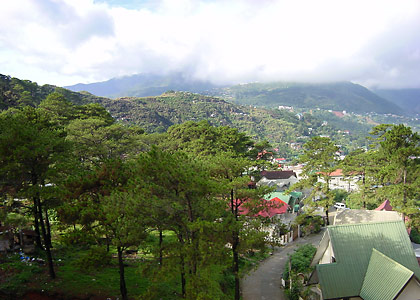 Economically, the most important municipalities in the region are Baguio City and La Trinidad in Benguet. Both are located fairly close to each other. We worked and lived in the City of Pines from 1998 to 2004 while getting to enjoy its cool climate and green scenery. Decades ago Baguio was a charming, slower-paced highland city of pine trees known as the country's summer capital. It has become highly urbanized in recent years, most especially after the devastating 1990 earthquake that caused major damage to the city. Baguio has recovered from this disaster quite remarkably, even cementing its hold as the region's business, commercial and educational center. La Trinidad is home to the regional branches of government institutions and is also famous for its vegetable and strawberry farms. 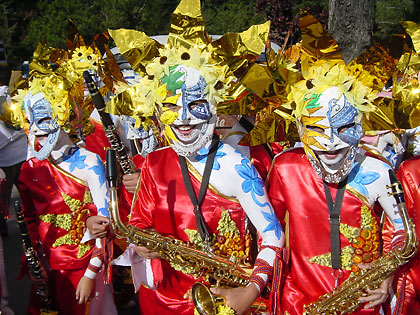 Baguio explodes in a blaze of colors during the Panagbenga Festival in February.

Mount Pulag, the highest peak in Luzon and the third highest in the country is located in the Cordilleras and can be accessed using trails from Benguet and Nueva Vizcaya. It has attracted a big number of mountain climbers. Further up north, Kalinga also offers world-class white water rafting along the Chico River.

One of the numerous limestone or karst formations dotting the hillsides of Sagada.

Picturesque and charming Sagada in Mountain Province has been drawing in a lot of visitors in recent years. Many local artists have also settled in this town. Sagada has often been compared to 1960's-era Baguio when the city was not yet as urbanized and congested as it is today. Tourist attractions include the "hanging coffins," Sagada's many caves, Echo Valley, waterfalls and rice terraces. Visitors can go trekking, spelunking, nature hiking, visiting historical sites and joining tribal celebrations. 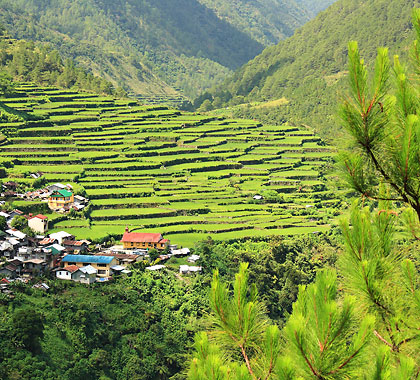 The Bay-yo rice terraces near Bontoc as viewed from the highway to Sagada.

Travel to the Cordillera region is not so easy since the road network in the region is not so well-developed for obvious reasons. Landslides have been a perennial concern for all three roads going to Baguio from the lowlands especially during the rainy season. The Halsema Highway (some say Halsema Trail) from Baguio to Bontoc has even made it to a few lists of the most dangerous roads in the world but goes through perhaps the most spectacular scenery of any major highway in the country. (The Baguio to Sagada section has also been completely paved recently.) Which is what makes the Cordillera region special to us. The scent of pine trees, the cool mountain air and the towering peaks shrouded in mist will always make this region a place to keep coming back to.