We had just left Baybay after a brief stopover on our way from Ormoc City. All the while our eyes were glued to the west and the blue waters of the Camotes Sea, as our van made its way down the coast to the sleepy town of Inopacan. It wasn't long before two islands materialized in our sights, the nearest one flashing a long stretch of white sand against a backdrop of ocean blue. We knew instantly that the pair was part of the Cuatro Islas, a group of four scenic islands off the towns of Inopacan and Hindang in southwestern Leyte.

Cuatro Islas is relatively unknown to most travelers. Unlike Kalanggaman Island farther up north which is slowly gaining in popularity, the group of four islands has yet to break into the travel itinerary of most folks visiting this part of the Visayas. We first encountered Cuatro Islas in a postcard in the early 2000's and soon realized that it was an unpolished gem waiting to be discovered. It took several years but finally, in March of this year (2015) we were ready to explore the islands of Digyo, Mahaba, Himokilan and Apid. Arriving in Ormoc to visit retired UP professor Dr. Oggie Hermosilla, we had three places lined up for our 5-day vacation with him and other friends. Cuatro Islas was first on the list.

We alighted from the commuter van near the municipal hall of Inopacan and to our good fortune it turned out that the pantalan or docking area for boats taking tourists to the Cuatro Islas was just behind the municipal hall. From there it was a short and uneventful 30-minute boat ride to our first island: Mahaba. 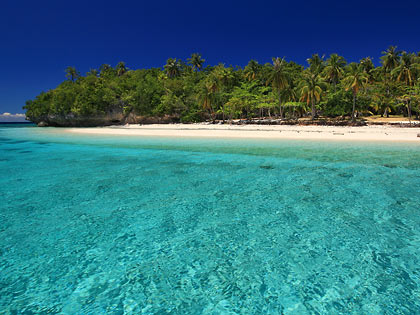 As its name suggests, Mahaba Island is elongated in shape and is the second largest of the group. The island is covered in lush vegetation and barely inhabited with only a tiny village in the northwest. There are beautiful white-sand beaches on the eastern and northern sides. We landed and stayed at the beach on the eastern section which is the longest in the island.

The beach at Mahaba Island's eastern side.

The waters off Mahaba are remarkably clear and crystalline, among the clearest we've seen. There are rock formations on the eastern side and a long sand-bar running parallel to the beach. We enjoyed swimming and taking pictures here. We've heard that the snorkeling here is very good. The island is actually a protected marine sanctuary and sea turtles have been observed on occasion. The coral reef is several meters away from shore where the sea bottom drops off suddenly to form a reef wall. From previous experience we know that this is where reef fishes abound. In retrospect we should have asked our boatmen to anchor at that point to allow us to snorkel from the boat. 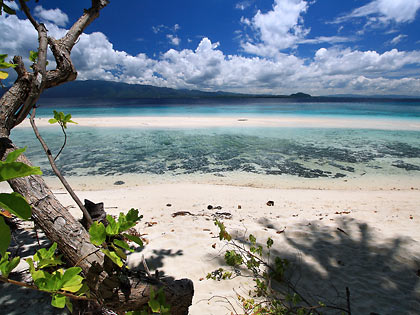 Mahaba is perfect for beach bumming but also offers plenty of shade if the sun gets too hot – which it did on this day. We also noticed several species of birds nestling in the trees just off the beach. We found out later – to our regret – that a rare and elusive specie of red shrimp may be found in the lagoons and streams in Mahaba. All that was needed was a trek to the forested interior. Mahaba is probably the most beautiful and promising of the 4 islands with the possible exception of Digyo. 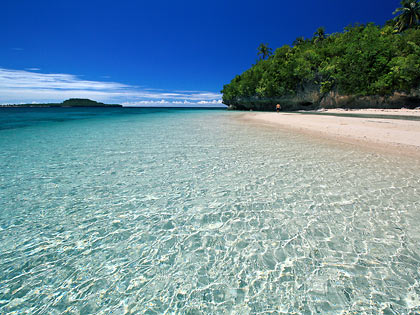 Rock formations at Mahaba Island; Himokilan Island is visible to the left.

It was almost lunchtime before we packed up and made the 20-minute crossing to the next island in the group: Digyo – where we rented a small hut to settle down and take our lunch. This island is the smallest of the Cuatro Islas but competes with Mahaba for the title of most beautiful among the four. 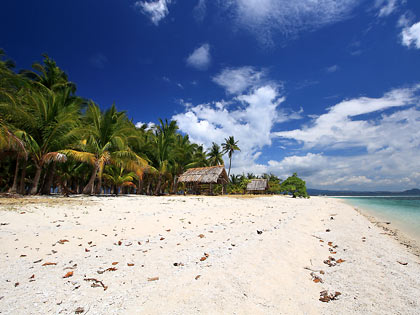 There are no resorts or fancy accommodations here, just huts or small cottages you can rent for the day (overnight visitors may bring tents). There are a few houses – probably for caretakers of the island. Restrooms are rudimentary and have no running water but kids on the island fetched water in pails from the sea. Which was okay with us because (1) it meant the place was relatively undeveloped and able to maintain its pristine state and (2) it was a surprise that there even was a restroom in an otherwise undeveloped beach. 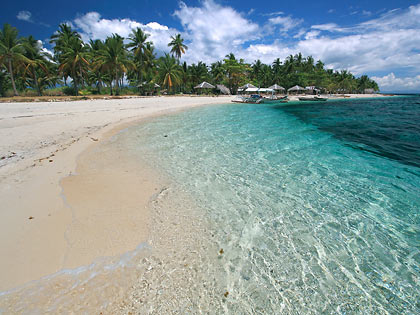 Sandbar and beach at Digyo Island's northwestern side.

Our rented hut is located at the northwestern corner of the island. We were able to walk all the way to the southern end in 15 minutes. There are sand bars jutting out from both ends of the island with the one in the south longer and more beautiful. Just like Mahaba the sand at Digyo is white and the waters crystal-clear. We did not see much corals and fish at the waters immediately off the beach on the western side of the island but, as in most cases, one only has to venture out less than a hundred meters from shore to observe a proliferation of corals and reef fishes. Digyo is an attractive, small island and we would spend a good deal of our time relaxing and exploring it on foot.

Outrigger docked at the sandbar on Digyo's southeastern section.

Himokilan is actually the nearest of the four islands to the mainland at Inopacan but we chose to make it our last stop knowing that we would be tired at the end of our island-hopping tour and looking towards a quick return to the mainland. Our boatmen was about to dock at a curving white sand bar on the northeastern part of the island when we realized that the beachfront here contained a small village. (Himokilan is the second most populated island in Cuatro Islas.) We decided not to dock here but to go on a boat ride around the island instead.

Our little tour would take us past some pretty beach bays on the northeastern part of Himokilan and plenty of coral reefs around. The southwestern part of the island is a sanctuary where fishing, snorkeling and diving are all strictly prohibited. Again, in retrospect, we should have asked our boatmen to anchor about 100 meters from shore where the corals were abundant – at least in those areas not classified as sanctuaries. If only the boatmen here were trained to accompany their guests to good snorkeling grounds which are usually located a bit farther from shore – just like the boatmen at Coron, Palawan. 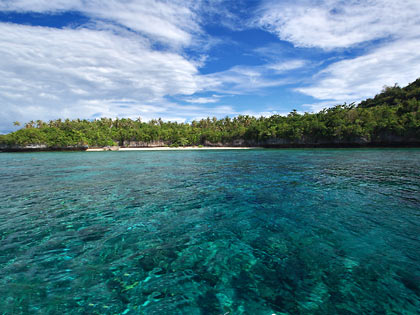 Apid Island is the most populated of the Cuatro Islas and the one located farther out west than the others. We decided not to visit Apid. According to our boatmen it was the least appealing of the 4 islands and we would have been charged an additional P500 for adding it to our itinerary. The white sand beach here (visible from Digyo Island) is home to a fishing village with boats docked along its length. We were running out of time to get back to Ormoc anyway, so we would not have maxed out our stay had we decided to proceed to Apid.

Getting There and Around

The town of Inopacan is the starting point for boat rides to Cuatro Islas. Since we were staying in Ormoc for our Leyte tour, it was a simple matter of getting a commuter van bound for Inopacan. The terminal for these vans is located near the Ormoc City Park between Larrazabal St. and the bay walk. Van fare is P100. The vans usually make the trip in 1.5 hours including a brief stop at a terminal in Baybay (Inopacan is the municipality after Baybay when heading south). Ask the driver to drop you off the Inopacan municipal hall. It is best to go early in the morning to maximize your time at Cuatro Islas.

If coming from Tacloban you can take the commuter van to Maasin (or Hilongos) via Baybay. You can take Van Van, Duptours or Grand Tours, each with their own terminals in Tacloban City proper. We prefer Grand Tours since they seat only 3 persons to a row in their vans while the others adopt the customary (and cramped) 4 persons to a row. We're not sure about the amount of travel time to Inopacan but it could well be close to 4 hours. 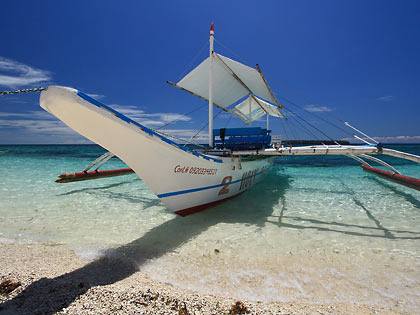 After getting off at Inopacan proper head for the municipal hall. The pantalan or dock for boats headed for Cuatro Islas is right behind the municipal hall. Since there are no restaurants or food stalls at the islands (with the possible exception of Apid and Himokilan) better bring packed meals and everything else you will need such as eating utensils and drinks (no drinking water on the islands also). There are food stalls in the area adjacent to the municipal hall where you can buy food but to be sure and wanting a wider range of choices we got ours from Ormoc before hopping aboard the van.

Most of the islands are a mere 30 minutes away by motorized outrigger from the port at Inopacan. The boats going there are usually built for 10 people or more. Rental prices are as follows (these are day trip prices; overnight stay has a different set of prices):

Some sources say you can get a boat for as low as P1,500 (perhaps for a boat that can accommodate 5-7 people but better check this out as it is safer to get a bigger boat even if you are less than 10 in your group). For boat rentals you may want to contact our boatman Loloy Pegte at 0906-5004881.

There is an additional fee of P500 for all islands. During summer island entrance fees are usually P20 per person, cottage rental is P200-250 or you could just bring tents if you want to stay overnight. There is a slight controversy about the entrance fees. The municipality of Inopacan is charging P30 per person for a trip to all the islands. The tourism municipal officer informed us that we do not need to pay the entrance fees if you stay off the private areas in the islands. (Our rented cottage at Digyo is located at a "public" area.) You can however stay or roam around the beach – considered public property – for free. In any case, P20 is not a big deal if you do want to stay at a private area, say at the cottages in the southeastern end of Digyo.

Back from our island-hopping we got to change clothes at the municipal hall, where the kind personnel allowed us to use their facilities. (No showers for rinsing though.) For our trip back we went to the main highway to flag down a van going back to Ormoc. This was the difficult part since the vans might be full but to our surprise the first van that came by (after just a few minutes of waiting) was almosrt empty allowing all 5 of us to be comfortably seated. It is a different story if you are going back to Tacloban where most of the time the vans would be full. You might be forced to take a short van ride to the terminal at Baybay, then take the van to Tacloban.

Visit our Facebook page for even more pictures of Cuatro Islas.